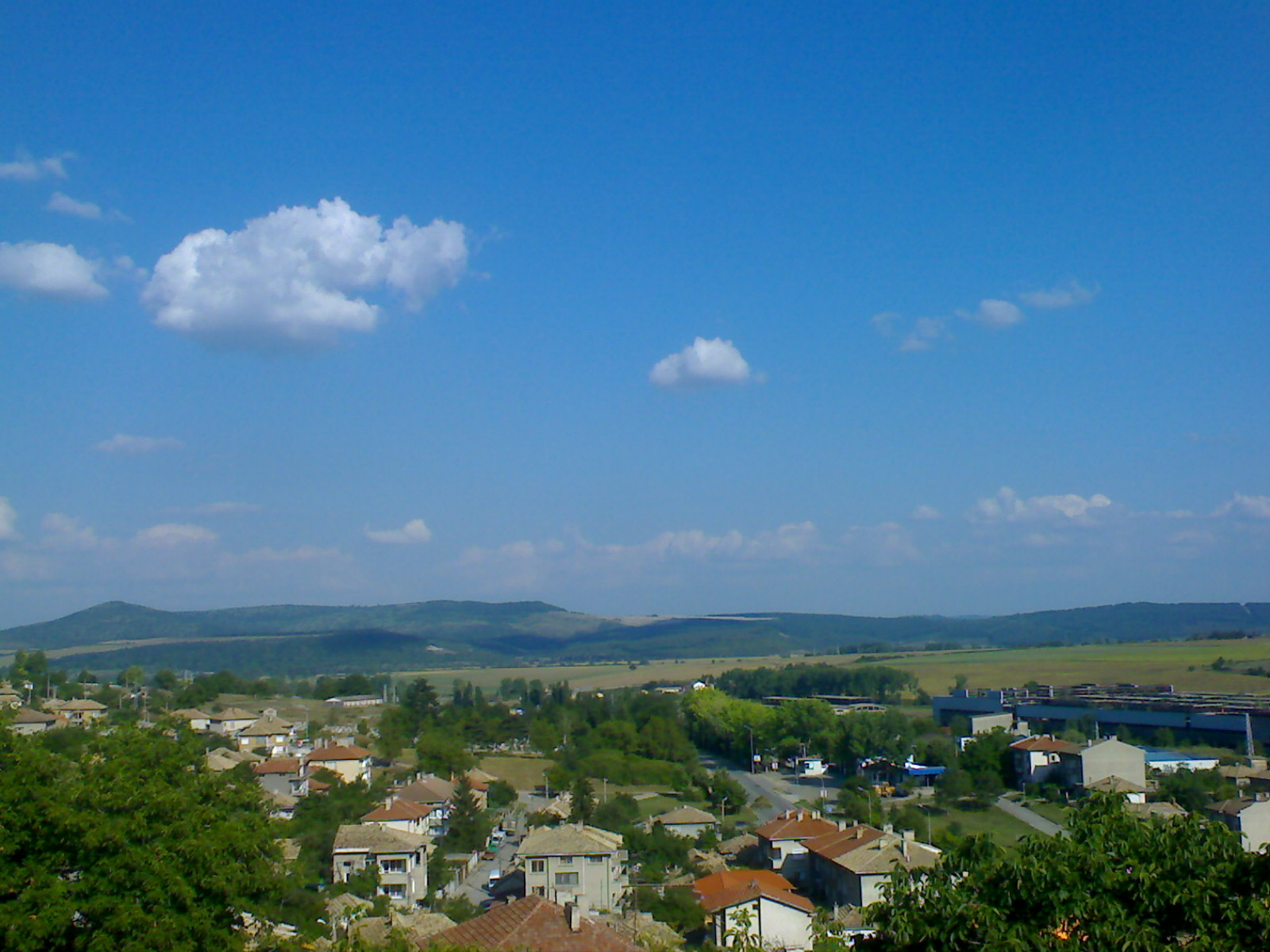 Popovo municipality is located in northeastern Bulgaria. In accordance with the administrative territorial division of the country, it falls within the district of Targovishte. The total area of the municipality is 833.398 square meters, bordering the municipality of Targovishte, Antonovo, Strazhica, Byala, Dve mogili, Opaka, Tsar Kaloyan, Razgrad Razgrad and Loznitsa.
In the administrative territorial boundaries of the municipality are included 35 settlements, of which only 34 villages and the administrative center is the city of Popovo. Settlement network is formed by four villages with a population of over 1,000 people, seven villages with a population of 501-1000 residents, 17 villages with a population of 101-500 people and six villages with a population of less than 100 people. The largest villages are: Kardam - 1590 inhabitants, Svetlen - 1226 inhabitants, Zaraevo - 1030 inhabitants, Sadina - 1020 inhabitants, Lomtsi - 977 residents and Slavyanovo - 900 inhabitants.
According to an old legend Popovo today was founded by a priest, who settled with his family near the creek, meadow, surrounded on all sides by ancient forests. With hard work, weeding the forest, he created agricultural plots. An early snow fall in the autumn found a small Turkish military unit, which had to spend the winteron the properties of the priest. When in the spring they returned to Constantinople, the Sultan was surprised and wanted to see the priest. He arrived with his sons by oxcart loaded with farm implements. When asked how he could feed not only his family, but the soldiers too in the past long winter, the priest responded with a gesture showing the full carriage and his sons. The Sultan sent him back with gifts and free behest to live where it is found. The priest became famous, and many Christian people wanted to meet him, and some of them built houses near his home. This is how Popkyoy (Priest village). 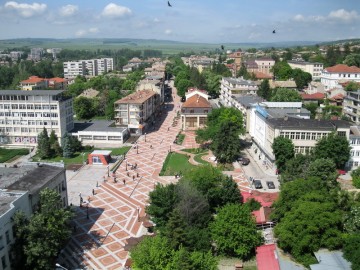 During the liberation of Bulgaria in the Russo-Turkish War of 1877-1878 , the first Russian troops enter Popovo at July 16, 1877 and the final liberation of Popovo, together with the surrounding villages takes place on January 15, 1878 by the Eastern troops of the Russian army.
After the liberation the village ahead of other economic surrounding countryside thanks to the enterprising spirit of the new settlers - mountaineers came mainly from Gabrovo, Veliko Tarnovo and Elena, Dryanovo, Trevnen and from Gorna Oryahovitsa, and the Turkish population emigrated. Due to its geographical features and the presence of enterprising and progressive for its time residents in 1880 Popovo village was declared a district center Popovska - 48 adjacent villages, and on June 10, 1883 and it was announced as a town.
The greatest economic boom in the town occurred after passage of the railway the Sofia- Varna, passing close to Popovo that was built, thanks to strong pressure from the local community on the government and the opening of the railway Popovo Station in 1899, then the small town becomes the primary agricultural, commercial, and later and economic center for the region. 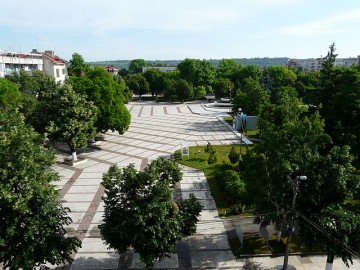 After September 9, 1944 after the nationalization of private industry consolidation and gradually were created multiple factories working intensively in the 90s of XX century. The strongest stimulus in local industry development provided through the integration of industry socialist countries. The needs of workers in the created huge industrial area about the size of Popovo in 1971 began construction of a new neighborhood ("Zapad" or "Rusalya"), built entirely with multistory apartment buildings where new workers could live. In the same year the town of Popovo have joined two of the nearby villages - Nevsky and Seyachi, and turned them in its neighborhoods, which today forms the territorial aspect of the settlement.
Interesting place to visit for lovers of cultural tourism are diggings of Roman ruins at fortress „Kovachevsko Kale", situated about 6 km west from the town of Popovo, near the modern road Popovo - Byala. The castle is located in a small flat valley, formed by the merger at a sharp angle into the river Kovachevska (Erek dere) and its northwestern tributary - Chepez dere. Massive wall built in the IVth century with thickness 3.20 m was going around an extensive area of ​​about 50 acres. 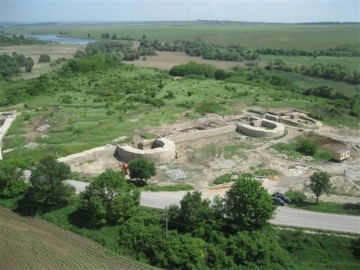 Another interesting place to visit is the remains of the Thracian domed masonry tomb from the end of IV century BC, located in the village Gagovo, near the road to the town Opaka. The tomb, excavated in 2009, is a monumental architectural complex consisting of two round chambers, a common rectangular camera dromos (corridor) and an additional rectangular room. Two circular chambers have a common connection implemented through entrance that is closed with a double-leaf stone door. Separate each camera has its own additional access to the common room. Tomb with such plans, architecture is not known until now the territory of Bulgaria. The place is not socialized to visit and not yet a tourist route to it, but access is now completely free.
Suitable location for development of rural tourism are the southern regions of Popovska municipality along the river Buyuk Dere. There, 20 km south from the town of Popovo, on the plains of adventures, is built the newest tourist destination in the region - ecotrail "Big River". It offers connoisseurs of beauty and nature lovers delight of well defined composition between water, rocks and greenery. A virgin area and natural border between the Balkan and the Danube Plain. Here in the spring, summer and autumn get together 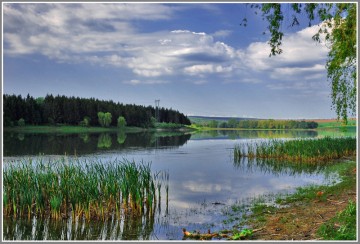 hundreds of tourists. They go into a magical and romantic adventure with biking, riding mules, walking, gathering herbs, observations of rare plants, fishing, participation in the preparation and tasting of local products, participate in traditional celebrations in the area of "Tyulbet ", nights outdoors in a tent and many other fun stuff. Here is everything you need for pleasant experiences.
A very good place for relaxation is the fishing lake "Kavatsite" located around the town in the direction of Popovo- Targovishte. In the forest shore of the dam is built hotel complex of bungalows. On the other side of the lake there are also hotel facilities "Hunting lodge" – village of Seyachi, close to hunting shooting range. Suitable for tourism development are the areas "Marinka Laka" woodlands around the villages Gorica, Dolets and Ivancha and the localities northeast of villages Kovachevets and Palamartsa.
In the eastern part of the city is a large park known as the City Garden. Founded a century ago, it is the pride of Popovo people who today enjoy the peace and quiet, in it. Repeatedly expanded and planted with rare plants, City Park Forest Park has grown and reaches the lake Kavatsite. Shady alleys with benches, open sunny spaces, fountains and paths create comfort and beauty. 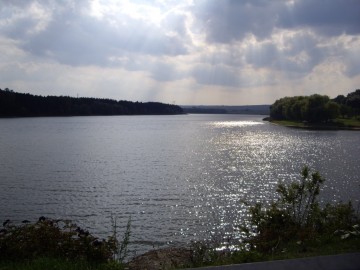 For the purposes of the weekly public recreation in the municipality are allocated 3560 acres, which include forest parks, water and fishing facilities, tourist and hunting lodges, provides excellent opportunities for the development of tourism. Leading role have the high in the mountain hunting tourism facilities- Elenovo, Golyamo gradishte and the "Marinka Laka" near Popovo owned by Forestry "Cherni Lom" and become a center of attraction for connoisseurs from all over Europe.