The municipality of Blagoevgrad is located in the southwestern corner of Bulgaria and covers an area of approximately 628 km2, on which Blagoevgrad itself and 25 adjacent villages are situated. The region of Blagoevgrad includes parts of three of the biggest Bulgarian mountains - Rila, Pirin and the Rhodopes and is well known under the name of Pirin region. The city of Blagoevgrad is the major city in the region and one the most important economic and cultural centers in Southwest Bulgaria. The main international routes connecting Bulgaria with Greece and Bulgaria with the Republic of Macedonia pass through it.

Check our high quality 4k video of the town of Blagoevgrad.

Blagoevgrad also allows easy access to the Bulgarian capital of Sofia (approximately 100 kilometers to the north) and to all towns in the region. The region around Blagoevgrad has abundant natural resources. The Blagoevgrad area is part of the region, known as "Pirin" which is characterized by its unique geographic location, physical beauty of the surrounding mountains, and rich flora and fauna.

Three majestic mountain ranges grace the plain -- the Rila, Pirin and Rhodopes. Picturesque lakes and roaring rivers provide the region with pure, fresh spring water. The names of the local rivers Bistritsa, Glazene, Struma and Mesta echo in the songs and the folklore of the region. The Blagoevgrad municipality has an ample supply of pure mineral water, river systems and lush mountain forests. The landscape is varied and beautiful. The physical characteristics combine to make Blagoevgrad the largest and most important town in southwestern Bulgaria. It is an important cultural, administrative, and industrial center for the entire southwestern part of the country.

On the territory of the Blagoevgrad municipality is situated the smallest town in Bulgaria which is extremely popular for several reasons we want to tell you about... Melnik attracts lots of Bulgarian and foreign tourists with its pyramids shining, golden- yellow, whimsical, shaped on the background of magnificent Pirin mountain. 380 m. over the sea level, Melnik is rich in cultural monuments - pledge and tombstones, architectural details, coins, etc. During the Traction- epoch here existed a village of the Thracian tribe "mcdi" which gave the world the great leader of the Roman- slaves Spariacus. Melnik is an old wine center Melnik wine was highly appreciated at the market of Thessalonica. The town has been popular as a wine-growing region since l346. The famous Melnik vine had been brought here from Syria in ancient times. During the first half of XIII century MFLNIK passed through a great political, economic and cultural upsurge, when despot Slav, a descendent of Assen dynasty ruler of the Rhodopes and Pirin mountain during 1209 turned the town into a capital of an independent feudal principality. Building developed to a great extent. Most of the house-building ruins are of that time. According to archaeological investigations data, residential quarters existed not only at the hill of St. Nicholas - the main center of medieval Melnik, but also at its foot in the North. Much representative was the Boyars House whose ruins may be observed at Chatala height in the Eastern part of the town. rn The Historical Museum of Melnik is in Pashov's House, built in 1815 with eight premises. Exhibited here are pieces of ceramics found on the territory of the contemporary town as well as in the plateau of St. Nicholas Hill (Slav Fortress). In the ground floor of the Museum you will feel the temptation of the former numerous Melnik wine cellars with dug-in barrels of sparkle-flowing wine. The town is an architectural preserve. Cultural monuments are 96 buildings.
The houses are amphitheatrically situated throughout Melnik golden rocks thus forming tiny streets with numerous workshops and cellars having wrought gates and shutters. One cannot leave behind the houses of Sandukchievs, Lambovs, Jankovs and Daskalevs. But most impressive is Kordopulovs house, built in 1758. Strong are its two-centuries-old walls. The sunny windows now reflect, just like in the time of Paissii Hilendarski, everything that happens down in the streets. 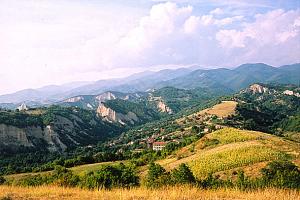 The climate of Melnik is favorable for medical treatment of chronic pulmonary, kidney and rheumatic disorders. In the Southmost part of Bulgaria - the region of MELNIK, summer comes just in the end of April and does away in October. The round shaped ridges of the mountains in the mind winds and the White Sea climate blown over the valley of Struma river have helped the vine-grower during the ages to cultivate the specific local sort "Wide Melnik Vine". It can grow only here and if carried to another place, it withers and fades away.
Melnik wine received through the tradesmen from Dubrovnik (they had a special diploma from Ivan Assen II awarded for privileges all over Bulgarian lands) conquered yet in 13 century the dining tables of the aristocracy from Venice, Genua, Marseille, Barcelona, Paris, Liverpool. For its saturated ruby color, delicate fragrance and sweet astringency, the horse, mule and donkey caravans loaded with goat wine-skins full of wine, traveled days on end along the steep and narrow mountain paths, called even nowadays "wine paths", in order to reach Dubrovnik to the West, Salonika to the Sough, Danube river and Vienna to the North until they found its real connoisseurs.
The caravan started on their way with splendid and solemnity so that their travel marked the everyday life in all surrounding villages. They kept a watch on heavy-armed strong man because Melnik wine was appreciated just as silk, porcelain and Indian spices at the market of Venice. Set in the sort of Meknik wine are its biological qualities for aging and maturing; thus - the older, the better. It suits strong men, raging passions, eternal feelings. Its taste and fragrance cannot be forgot or replaced by anything else which reminds of it. The hill in this region turn hot from the scorching sun so fast, that the fermentation quickly starts and vigorously goes on. That is way for ages on end the people here invented a way to preserve the cold and to retard the processes in wine formation. Thus were "born" the stony lyns (prolonged vessels for carrying and smashing of the grapes, carved out from a whole trunk of a tree, with a chute at one end, for the flowing down of grapes juice. A device, unchanged for ages) Their inside surface was coated with a special mixture of clay, mortar and olive oil. At that time appeared the first barrels for the preservation ion of the wine hollowed out of single stony blocks. Another peculiarity of Melnik wine is the deep and cool tunnels dug out in the hills which put into final touch its aging and maturing with their constant low temperatures. The glory and the sweetness of Melnik wine haven't remained only in the past. Nowadays it is produced according to all requirements of the modern technology and has its connoisseurs in many European countries but most of all in Scandinavian countries, Switzerland and England. 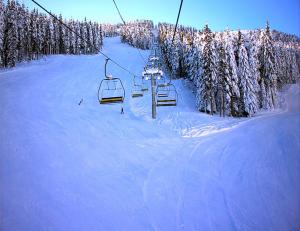 cial place that cannot be left unmentioned - the ski resort Bansko. The place provides an interesting combination between the virgin nature of Pirin Mountain and the atmosphere of the ancient Bulgarian small town.

Bansko ski resort is situated in Southwestern Bulgaria, at the foothills of one of the most beautiful Bulgarian mountains - Pirin, which is a national preserve, included in the WORLD NATURAL HERITAGE list. The distance from Sofia to Bansko is 160 km. The skiing conditions in Bansko are excellent. The Pirin mountain has a predominant Alpine character with three peaks towering above 2900 m. However the slopes offer runs and tracks for all types of skiers, from novice to the experts, while the ski runs are maintained in excellent condition. The town itself attracts visitors by its 120 cultural monuments, its museums houses, and the permanent ethnographic and Bansko school of icon painting exhibitions. A very interesting sight is the HOLY TRINITY church with its 30 m high bell tower and clock, splendid murals and woodcarvings. The region is famous for its cuisine and colorful folklore and offers various entertainment opportunities.