Apartment for sale in Nessebar

This is an outstanding new apartment on the 4th floor in a building located between the new and the ancient town of Nessebar. The apartment is 112 sq m in size and consists of 3 rooms, corridor a bathroom and a kitchen. And there is also a small basement 2 sq m in size. Each room has its own balcony with outstanding view to the sea and the ancient town of Nessebar. The bath room is very specious. It is fully equipped with a bath tub with a shower, sink, cup boards, a mirror, water heater, and sanitary equipment. The kitchen is equipped with cup boards, sink and a fridge. There is a place for a cooking range with installed absorber above it. The apartment is made of brick, finished with inner and outer isolation, latex painted walls and ceilings MDF doors, tiled floors, blue tiles in the bathroom, PVC window frames, air conditioned. Switches lighting objects and electric installation are equipped. Electricity, hot and cold water are provided.

Nessebar s an ancient city and a major seaside resort on the Black Sea coast of Bulgaria, located in Nesebar municipality, Burgas Province. Often referred to as the "Pearl of the Black Sea", Nesebar is a rich city-museum defined by more than three millennia of ever-changing history. It is a one of the most prominent tourist destinations and seaports on the Black Sea, in what has become a popular area with several large resorts-the largest, Sunny Beach, is situated immediately to the north of Nesebar. The ancient part of the town is situated on a peninsula (previously an island) connected to the mainland by a narrow man-made isthmus, and it bears evidence of occupation by a variety of different civilisations over the course of its existence. Its abundance of historic buildings prompted UNESCO to include Nesebar in its list of World Heritage Sites in 1983. There is a regular transport connecting Bourgas, Pomorie, Nessebar and Sunny Beach. Similarly to other seaside resorts during the peak season, there are a lot of private taxis and minibuses at competitive prices as well. Besides regular water transport to Bourgas, one can often hire local boatsmen to visit nearby places in the bay. The most famous hotels in the town are Messembria Hotel, Globus Hotel and Bourgas Hotel. There are also a lot of small hotels and private lodgings without prior booking including in the old town. Traditionally, tourists arriving to the town are met by a bunch of local people offering accommodation at private houses and small hotels. In the area there are 118 hotels, 294 private lodgings, 55 restaurants function on the territory of the municipality. A significant part of this in-kind base is concentrated in the resort complexes Sunny Beach and Elenite in Nesebar and the villages St. Vlas and Ravda.

Apartment for sale on the first line from the sea

The offered apartment has a total living area of ​​85.43 sq m. It is located on the first line from the sea in Nessebar. The apartment is one-bedroom type, designed for 4 people. It consists of a modern living room with kitchenette, bedroom, bathroom and a terrace overlooking the sea. It is equipped with air conditioning, boiler, cable TV and internet. The property is ideal for family vacations and for rent during the active summer season, the advantages of which are the proximity to the beach, restaurants, cafes, the ancient town of Nessebar. The building has Act 16! The annual maintenance fee is 4.20 Euro / sq.m. Complex infrastructure: Swimming pool Reception Parking 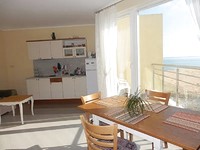 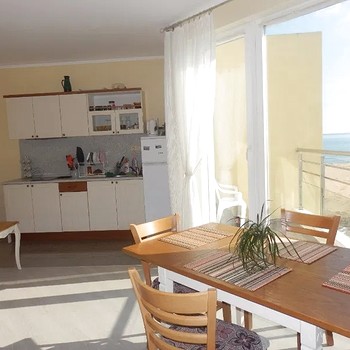 Maisonette apartment for sale in the center of Nessebar

Two-bedroom, two-level apartment with a total living area of 104.45 sq m. The building is located within a walking distance from the South beach of Nessebar and 100 m from the city center. The apartment is on its third floor. The distribution inside is very convenient: entrance hall, spacious living room with kitchen and terrace, internal staircase, 2 bedrooms and 2 bathrooms, second terrace from both bedrooms. The property also comes with a basement of 3.66 sq m. The property is offered in excellent condition and is ready to move in: terracotta and laminate flooring, latex walls, PVC windows, equipped bathrooms, fitted kitchen with appliances, refrigerator, TV, air conditioning, washing machine, boiler, beds and wardrobes, wall furniture, corner sofa, dining table with 6 chairs, lighting. The area offers everything you need for comfortable living. There is easy access to the center, shops, restaurants, walk areas. The Old Town is only 1.3 km from the property. 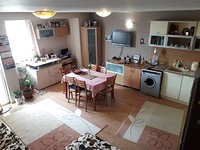 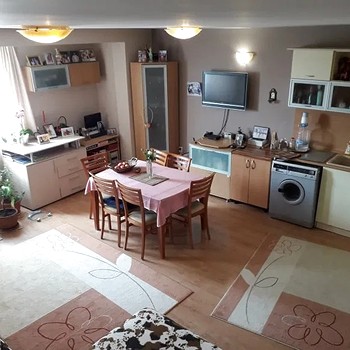 Furnished apartment for sale in Nessebar

We bring to your attention a fully furnished, 2-bedroom apartment, located in the sea resort of Nessebar. The property is situated in brick building in the newest neighborhood of the resort - Cherno More. The apartment has a total living area of 90 sq m. It consists of 2 bedrooms, a living room with kitchenette, 2 terraces. Sold fully furnished and equipped. The building is newly built – 2010. The apartment is on its 3rd floor. The property is situated close to a kindergarten, a church, grocery stores, bus stops, playgrounds and restaurants. There is free parking. The neighborhood is quiet and calm, 10 minutes from the South Beach of Nessebar. 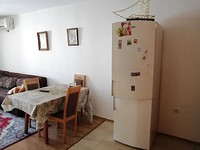 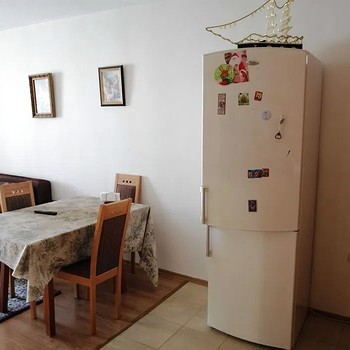