The town of Veliko Tarnovo has 66 998 inhabitants and is 210 metres above sea level. It is situated along the historical hills of Sveta Gora, Tsarevets and Trapezitsa, on the two banks of the Yantra River. The town is situated 240 km north-east of Sofia, 86 km east of Lovech, 46 km north-east of Gabrovo, 50 km east of Sevlievo and 106 km south-west of Rousse. 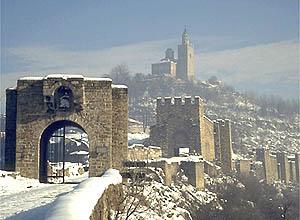 Veliko Tarnovo is the town with the most glorious historical past in Bulgaria. It is a symbol of Bulgarian statehood and a source of national pride for every Bulgarian.

The earliest traces were found on the Trapezitsa Hill. Remnants on Tsarevets Hill date back to the end of the Bronze Era (13th century BC). This oldest settlement was inhabited by Thracians (the tribes of uzdicenses and crobises) and existed by the end of the Iron Era. Its prosperity is related to 6th century BC - till 1st century AC.

The origin of the name "Veliko Turnovo is related to the Slavonic word ?torn? (thorn) and during the years it developed into Ternov, Trunov, Tur-nov, Turnovgrad, Turnovo and Veliko Turnovo, being called "Veliko" (Great) in relation to its size, beauty and grandeur.

Although Sofia became the capital of Bulgaria after the Liberation of Bulgaria, Veliko Turnovo continued to be a sanctuary for all Bulgarians, a bastion of Bulgarian national spirit and self-awareness. It is the birthplace of Petko R. Slaveikov, of the great actor Konstantin Kissimov, of the writers Emiliyan Stanev and Dimitur Mantov and of a lot of other eminent Bulgarians.

The second largest architectural complex of Tsarevets is Bulgarian Patriarchy. The Patriarchal complex rose at the highest place, above the Tsar?s Palace. It occupied an area of about 3000 square metres, shaped as an individual fortress in the shape of an irregular polygon.

Tsar Kaloyan?s grave and his golden 61-gram ring-seal were found during excavation works in the 1970-ies.

Sveta Gora is the third hill of the Metropolis Turnovgrad. It rises south of Tsarevets and it was a cultural and spiritual centre of the Bulgarian State in Medieval times. There were a lot of churches and monasteries here. 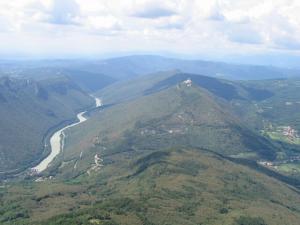 le the town started to expand to the west. Predominantly Turks settled down along the hills of Tsarevets and Trapezitsa and predominantly Bulgarians settled down in the new quarters. Construction of a lot of new private and public buildings commenced with the growing economic prosperity of the Bulgarians during the Revival period, a great part of which still adorn the Old town (between the hills of Trapezitsa and Sveta Gora, separated from them through the meanders of the Yantra River).

The town of the old Metropolis is connected with bus and a railway transport. There are regular bus lines to Sofia, Gabrovo, Rousse, Lovech, Kazanlak, Tryavna, Drya-novo, Sevlievo, Gorna Oryahovitsa (a town bus line), Lyaskovets (a town bus line), Pavlikeni, Turgovishte, Popovo, Byala and other smaller settlements within the region.

The village of Arbanassi - Architecture and Historical Reserve located at the distance of 4 km north-east of Veliko Turnovo. Its flourishing as a trade and craftsmen?s centre was during the 16th to the 18th century when the monumental houses and churches with a rich interior decoration, woodcarvings and mural paintings were built. These are unique monuments of our architectural and artistic heritage.

The Preobrazhensky Monastery is situated at the distance of 6 to 7 km north of Veliko Tarnovo, under the inaccessible sheer rocks of the left bank of the Yantra River. It flourished during the 14th century. It was repeatedly ruined and destroyed by fire during the years of Ottoman Rule and rebuilt in the first half of the 19th century. One of the most remarkable monume 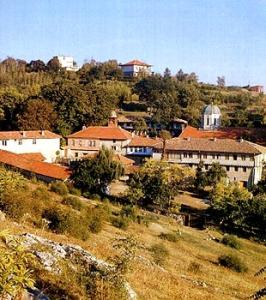 The next Annunciation Church was built by the Master Kolyu Ficheto and Stanislav Dospevski painted the icons. Dimitar Sofialiyata built the little underground St. Andrei Church, and the icons were painted by the unique icon-painter and wood-carver Papa Vitan, one of the most eminent representatives of the Tryavna School of Art. The last of the monastery churches is Lazar?s Ascension Church (of 1891), whose icons were painted by the citizen of Tryavna Ivancho Kunchev.

One of the oldest monasteries around Veliko Tarnovo - Sveta Troitsa Monastery (The Holy Trinity) is located on the right bank of Yantra River opposite the Preobrazhenski Monastery. It originated back in the year 1070.

It can be reached by bus or on foot from Veliko Tarnovo and from the village of Samovodene or along a picturesque track under the rocks of the Yantra River in about a 2-hours? walk from the town.

There are a lot of other sightseeings that you could enjoy in the town and its surroundings. Most of them are hard to be depicted, thei should be seen.