Information about the city of Varna, the sea capital of Bulgaria

The city of Varna has a population of 314 539 and is situated at the Bay of Varna. Situated on 470 km east of Sofia. Varna is the biggest city at the Bulgarian Black-sea coast. It is nestled in the deep valley between the Frengen Plareau and the Avren Plateau, where two lakes were formed during the polyotsen - the Beloslav Lake is to the west of the city and the other - Varna Lake is within the limits of the city itself.

The city is like an amphitheatre and follows the curves of the Bay of Varna. It is surrounded by lots of gardens, vineyards and deciduous groves. Almost the whole territory is occupied with private country-houses and their small farms. The city is a regional administrative centre. 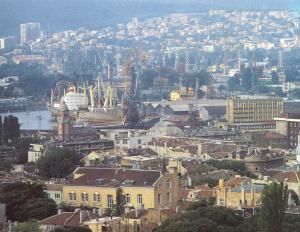 Varna has a history that could be traced back for thousand years. Due to its favourable location and visibility of almost 270 degrees the small cape, which now hosts the sea station, was inhabited by an ancient Thracian tribe ? Corbisy in their small fishermen?s settlement.

In 6th century BC a Greek polis (settlement) inhabited by colonists and settlers from Millet emerged here under the name of Odessos. The town became a fishing and farming colony and later on in the 5th century BC it turned into a real centre of commerce.

In 9th century it was already called Varna. It is supposed that the name originates from the horse people in Central Asia ? toponymy (name of an area) and hydronymy (name of a water basin) in India (the river that runs into the Ganges at Varanassi) and from the concept of caste (colour).

The Holy Mother Cathedral is considered to be an emblem of the seaside capital of Bulgaria. It rises at the very city centre across from the theatre alley. A Revival master in the manner of Petersburg architecture built the church in 1866.

The Sea Garden Park is another emblem of Varna. It dates from the end of the 19th century, being finally completed in 1908. At that time the idea to place the busts of outstanding Revival figures in some of its valleys was accepted. Nowadays there is an amphitheatre; astronomic site, the first in the country, with an observatory, planetarium and a tower; many playgrounds for children, and a small channel, where they can practice rowing, as well as a pool for water wheels and a zoo.

The open-air theatre is a place, where various activities take place. These include the Varna Days of Music, the world famous International Ballet Competition and Varna Summer - a trienalle of arts. The central sea baths and the beach are locat 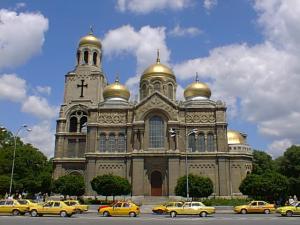 ed beneath the Sea Garden Park. They were built in the beginning of the century and are equipped with a polyclinic, water- and mud- cure complex, two quays, several restaurants and disco clubs.

The Russian Monument is in Primorski park. It was erected in honour to the Russian soldiers who died in Varna in the War of Liberation.

The Festival Complex is opposite the entrance of the Sea Garden Park. It is a modern building of aluminum, stone and glass. Many exhibitions and festivals are held here as well as ballet and theatrical performances. The Sports Palace is located at the motorway to the resorts Zlatni Pyasutsi (Golden Sands), St. Constantin and Albena. Competitions in over 30 sports games take place there; exhibitions are held; concerts and performances take place, too.

The Dolphinarium (Show-House) is one of the favourite attractions for children and guests of Varna. There are regular performances and demonstrations with clever dolphins. Feeding the dolphins and taking pictures is allowed.

The Museum of the National Revival is housed in a building from 1861, which was proclaimed a cultural monument. Patriotic citizens and scholars arranged the museum exhibition in 1959 and it has been enriched and extended many times. The original arrangement of St. Archangel Michail Church can be seen on the ground floor. An impressive exhibition shows the struggle for religious enlightenment and national independence and the epic battles during the Russian-Turkish War of Liberation.

The Museum of Medicine is the only one on the Balkan Peninsula. Medicinal plants and herbs are here on display, as well as surgical and other medical tools and clothing used in ancient times up till now. It was founded in 1869 a 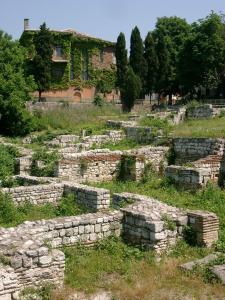 s a private hospital with a small museum.

The Museum of Art and History of Varna has an exceptionally rich collection, one of its exhibits being the Gold Treasure of Varna - dating back 6000 years ago it is the oldest processed gold found in the world. 281 tombs were found in a necropolis dating back to the Halcolith Age. One of them contained more than 3000 golden articles (statehood attributes, jewellery, adorning, etc., of the total 6 kg weight.

The fastest way to get to Varna is by airplane, it takes 50 min from Sofia to Varna. Varna?s airport functions throughout the year. Planes in both directions fly 6 or 7 times a day during the summer. The sea station provides sea buses to Balchik, Slanchev Bryag (Sunny Beach), Nessebur and Bourgas. Varna is connected to all of the main railway lines in the country.

Buses for all the main destinations in the country start including Sofia from here. Buses travel to Athens and Istanbul as well as to some cities in Central and Eastern Europe. Varna?s public transport offers over 60 bus lines that travel to various destinations. Some of the buses travel to the nearby resorts (20 km away from the city). There are trolley buses available in the city as well.

The famous village of Vinitsa is situated 10 km north-east of Varna. It is a favourite place where the citizens of Varna often go on picnics or for walks, it is also visited by a lot of tourists.

The Cape Galata is very attractive for a lot of tourists who seek solitude among nature. It is situated in the distant part of the Galata Quarter. There are wide meadows among deciduous groves and natural water springs with drinking water, and rocks convenient for fishing and cockle catching.

vo and Galata. It is the longest bridge in Bulgaria and works on it are still under way. Here the local club for extreme sports organises Bunji jumps. Around the Asparuh Bridge near the quarter of the same name the relics of the rampart of Asparuh can be seen. The great Bulgarian ruler built them 13 centuries ago in order to resist the raids of the Byzantine fleet.

To the south of the lake of Varna the Dzhanavar Hill can be visited. A basilica from the early Christian period is built here. In the 6th century there were fortifications to resist the raids of the Avari tribe.