Information about the beach resort - Tsarevo

The town of Tsarevo has a population of 6184. It is 72 km south of Bourgas and 462 km south-east of Sofia. It is situated at the foot of Strandzha Mountain where it slopes to the sea. Mt. Papiya raises more than five hundred metres above the town. There are three spacious beaches in the vicinity.

In ancient times there was a colony named Vassiliko. It was only in 1912 that the town was included into the territory of Bulgaria. The name of Tsarevo dates back to 1930s, and it is a Bulgarian translation of its old name. After 1944 it was renamed into Michurin, but today it has regained its former name. It is a big international port for medium passenger and cargo ships. The population earn their living with fishing, vine-growing, trade and tourism. 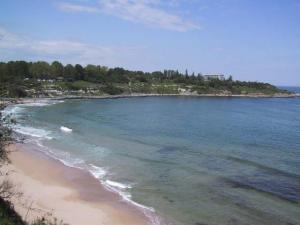 The camping sites of Arapya and Nestinarka offer great opportunities for accommodation at low prices for bungalows and camping. Chaika Hotel and the numerous private lodgings provide accommodation during the summer season.

Once one gets into Tzarevo, it is worth spending a (cloudy) day away from the beach, deep into the Stradzha Mountain. The mountain was declared a natural park in 1995 (in fact being the largest one in Bulgaria) and is one of the least explored in Bulgaria, which explains the richness of its wildlife. The mountain also has a lot of caves (particularly in its western part), traces of ancient civilisations (such as stone figures, sun discs carved in stone, Thracian dolmens, fortress walls, protobulgarian sanctuaries, etc). The mountain's villages are also unique in terms of spirit and architecture. Two such authentic villages to the southwest of Tzarevo on the road to Malko Turnovo are Kolodovo (22km away from Tzarevo) and Bulgari (17km away). The village of Bulgari is particularly famous for its 'nestinarski' dances (barefoot dance on glowing embers), held on the occasion of village fairs or holidays, such as the one of St. St. Constantin and Elena on the 21st of May. Two natural reserves, Silkosiya and Tisovitsa, which fall within the boundaries of the Strandzha Natural Park, can be found to the south and west of Bulgari respectively. Trees of some 200 years of age can be seen there. Another attraction in the neighbourhood is the village of Gradishte where Thracian mounds were discovered.

The most famous catering establishments in the town are the Yalta Restaurant and the Passat Snack Bar. There are lots of small private restaurants, stalls, a marketplace and grocer?s shops. Fish that can be bought at the port from local fishermen directly. Prices are low.

There are two villages to the south-west on the road to Malko Turnovo. They are famous for the nestinarski dances (barefoot dance on glowing embers), which are a tourist attraction nowadays. The actual ritual is held on 21st May when the old female fire-dancers perform.

The villages of Kodolovo and Bulgari are 22 and 17 km respectively away from Tsarevo. Another attraction is the village of Gradishte where Thracian mounds were found.