The town of Troyan has a population of 26 541 inhabitants and is 400 metres above sea level. It spreads out along the two banks of the Beli Osum River at the northern foothill of the Troyan Balkan Mountain. It is situated at the distance of 60 km to the east of Teteven, 180 km to the north east of Sofia, 70 km and 35 km to the south of Pleven and Lovetch, respectively, 47 km to the south-west of Sevlievo and at the distance of 25 km to the north-east from the historical Troyan Pass in the Balkan Mountains. It is a town with opulent traditions.

The name of the town comes from the ancient Roman road crossing the Balkan Mountain through today?s Troyan Pass - Via Trayana, which 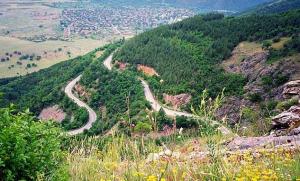 linked Misia with Thrace and the Aegean Sea. The origin of the today?s settlement is thought to go back somewhere at the beginning of the 15th century, when, after Bulgaria fell under Ottoman Rule, a lot of Bulgarian refugees settled down in this hard-to-reach and forested region running away from the arbitrary rule of the Turks. Later on the migrations continued and Troyan grew up but about the year 1800 the town suffered three invasions of the kurdzhalii (Turkish brigands) which devastated it. In spite of this during the 19th century the town reached a high material and cultural prosperity. The crafts were those, which reached their greatest development, pottery and woodcarving in particular. More than half of the population of the town made their living on the basis of these crafts till World War II. The bright and intelligent mountain dwellers realised that their future lays in faith and enlightenment. Talented master builders created magnificent patterns of the Bulgarian Revival church architecture in the town and within the region - in 1835 Saint Paraskeva Church in Troyan and The Assumption Church in the Troyan Monastery were built. In 1839 the Saint Nikolai Letni Church was erected in the area of Goumoshtnik whose wood-carved iconostasis is a unique of its kind work of the Bulgarian Revival Art. In 1870 a Community Cultural Centre was set up in Troyan, in which 2 years later the commencement of the theatrical activities in the town was set up with the performance of ?Genoveva the Martyr?.

In 1872 the ?Yellow School? was built up in the town, in which the modern secular program of teaching was introduced involving studies of the French language as well. The inhabitants of the town of Troyan did not let the revolutionary processes go past them either. In 1869 they enthusiastically met the Apostle Vassil Levski and Matei Preobrazhenski - Mitkaloto. Two years later a secret revolutionary committee was set up there at Levski?s initiative. During the Russian-Turkish War of Liberation in August 1877 Troyan was devastated by the bashibozouks (Turkish army of volunteers), but its population rendered invaluable assistance to General Kartsov when his army passed the Balkan Mountain through the Troyan Pass. After the liberation the town was rebuilt out of the ashes.

In 1911 the first electric bulb was lit and soon after that Troyan became the third electrified town in Bulgaria (after Sofia and Plovdiv). The building of the railway line Lovech ? Troyan gave an impetus to the development of the town - it commenced in 1929 and was completed in 1948. In the autumn of 1998, 130 years of the proclamation of Troyan as a town were solemnly celebrated. 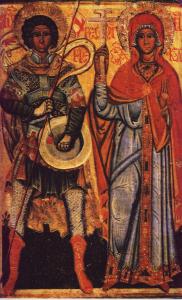 Serekov?s House Town Art Gallery. The Saint Paraskeva Church dating back to 1835. _n architectural ensemble around the house of Vlassi Vlaskovski (Vassil Levski Street). The homes of Ivan Hadzhiiski and Minko Nikolov. An architectural ensemble (houses over the river) next to Marko?s Bridge. The architectural complex Nounki (in the central town part, next to the river - restored houses of the traditional Balkan mountain architectural type). It is a hotel at the moment. Architectural complex at 129-137A, V. Levski Street. The house of Dona Milina (next to the church). Architectural and ethnographic ensemble along Tsar Kaloyan Street. Balev?s houses at Gen. Kartsov Street. Old houses in Popishka Quarter. Old houses in Drianska Quarter. There are some annual festivities of national importance, as well, namely: A day of the Plum Tree and Plum Brandy ? the last Saturday of September, Festival of Films for the Mountain ? the last Saturday and Sunday of September, The Day of Troyan ? 14th October (Petkovden ? Name day of those named Petko).

Bus and railway transport. There are regular bus links with Sofia, Pleven, Lovech, Cherven Byiag, Veliko Turnovo, Gabrovo, Sevlievo, Plovdiv and Karlovo as well as with almost all smaller settlements within the region. There is a private Neshev Bus Line to Sofia (point of departure in Troyan - in front of the hotel, in Sofia - near the Princess Hotel, the former Novotel Europa Hotel). Troyan is connected to the national railway network through Levski railway station. There is a town bus transport as well.

The historical Troyan Monastery is located at the distance of 10 km to the south-east from the town of Troyan (refer to the Stara Planina related chapter herein).

A local biology teacher created the Museum of Natural Science in the village of Cherni Osum (12 km southeast from the town of Troyan and 2 km to the south of the Troyan Monastery). There is a regular bus line between the village and the town. There are accommodation facilities in Cherni Osum. The village is a point of departure for hiking tours around the Troyan Balkan Mountain.

National Fair ? Crafts and Applied Arts in the village of Oreshak (7 km to the east of the town). Articles of the modern masters of art crafts and the applied arts not only from Troyan and the region but from all over the country, often of foreign guests, are is exhibited in the numerous halls there. A part of the exposition is a bazaar, too. Demonstrations of masters and tasting of the famous Troyan plum brandy (rakiya) are organized upon a preliminary request. There are accommodation facilities in the village as well. All the buses from Troyan to Cherni Osum, the Troyan Monastery, Apriltsi, etc. have a stop in the village of Oreshak.

Beklemeto - a resort tourist complex in the area of the same name, 22 km to the south-west from the town and 3 km under the Troy--an Pass in the Troyan Balkan Mountain (about 1300 metres above sea level). There are a lot of private country-houses, public catering establishments, a hotel complex named ?Bulgaria? with 50 beds, a restaurant. 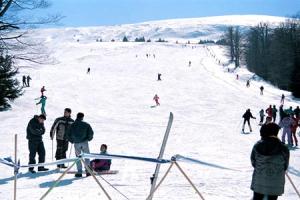 Battles for control of the Troyan Pass by Russian units and Bulgarian volunteers were held there during the Russian-Turkish War of Liberation (January 1878). The historical Kartsov Buk (Beech-tree) bearing a mark of the sword of a Cossack is located at about 1 km south of the central part of the complex. Beklemeto is a point of departure for tourist hiking tours round the Troyan Balkan Mountain - for the Dermenka Chalet, for the Kozya Stena Chalet and others. All the regular buses passing through the Troyan Pass stop at Beklemeto.

The village of Shipkovo - 18 km to the west, on the road for Teteven, among the northern elevations of Vassiliov?s Mountain. A balneotherapy resort with holiday houses, private country-houses, an open-air mineral beach with a swimming pool. Private lodgings are offered as well. The mineral spring is with the output rate of 55 l/sec at the temperature of 52°_. The mineral waters there cures hypertension, gastric, liver, kidney and nervous diseases. It is the point of departure for the Vassiliov Chalet (a 2-hour walk) under the higher peak in the Vassiliov?s Mountain. 5 buses run daily between Shipkovo and Troyan.

A great part of the Troyan Balkan Mountain is within the boundaries of the Central Balkan National park within the framework of which the Steneto and Kozya Stena Bio-sphere Reserves are located. The first is included in the list of UNESCO and comprises an area of 3602.4 hectares around the upper course of the Cherni Osum River. It is characterised by a great deal of rocky formations, karst shapes and caves. A regular bus running to the village of Cherni Osum may be used and one can walk from there on. The second is the smallest reserve in the park and it was created mainly for the preservation of the endemic kind of old mountainous edelweiss. One of the most beautiful peaks of the Balkan Mountain is situated here ? Mt. Kozya Stena. It may be reached most easily from Beklemeto (about a 2-hour walk). Troyan is one of the most important points of departure for tourist hiking tours around the Central Part of the Stara Planina Mountain and, in particular, around the Troyan Balkan Mountain.

Sopot Dam - at about 30 km to the north-west, by the village of Golyama Zhelyazna, it is a wonderful place for recreation, sunbathing, water motor sports, water tourism, fishing. There are good conditions for camping as well as holiday houses, private country-houses, public catering establishments. All the busses passing by have a stop there.