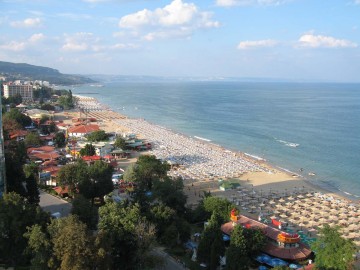 Sunny Beach is the largest tourist resort on the Black Sea. With its hotels and apartment complexes located along the beach and hidden in the greenery, Sunny Beach is like a magical oasis.
Sunny Beach is situated on the southern coast , about 30 km from the district center Bourgas, 100 km Varna - the sea capital of Bulgaria and 3 km from the ancient town of Nessebar. Located on a wide bay with semicircular, opened to the east. To the north, the resort is surrounded by the Stara Planina Mountain, which coexists in harmony with the sea to the south of the picturesque town of Nessebar.
The beach is long 8 km wide from 30 to 60 meters, covered with fine golden sand and natural dunes. Here grow rare plants. The sea is clean, no dangerous fish. The average temperature of the sea water is 20-26 ° C and salinity was two times lower than that of the Mediterranean. Sunshine between May and October is around 1700 hours. Sunny Beach is a bearer of eco- award "Blue Flag" for proven ecological beaches and clean sea, fresh air coming from the nearby mountains. For the first time the resort received this award in 1995. 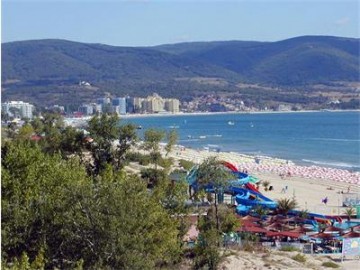 Modernized tourist facilities of the complex is spacious and luxurious, meeting the latest trends in hotel furniture and design. Hotels and apartment complexes have their own fitness rooms, spas, saunas, swimming pools, beauty and massage, beauty salons, medical facilities , game rooms and more. Numerous restaurants, taverns with folklore shows, snack bars, cafes, day and night clubs, bars and the variety of shows, casinos and discos provide good fun and culinary delights. Travel services are at the highest level. For lovers of sport and excitement there are countless options: surf, water skiing, parachuting, flying banana, yacht clubs, water bikes, scooters, beach volleyball , tennis courts, bowling, horseback riding, mini- golf, etc. With numerous children's clubs, swimming pools and gardens, Sunny Beach is a paradise for children. Tourists are offered a wide selection of excursions and activities. There is a beach for and sun for everyone.
The design of Sunny Beach began in 1957. Along with the construction of the complex started the design of the green park. In the complex were moved 550,000 cubic meters of fertile soil, planted 300 000 large-sized coniferous and deciduous trees, ornamental shrubs 770 000, 100 000 roses, 200 000 dune grasses and the investment exceeded 150 million levs. For the period 1959-1988 in Sunny Beach rested 7.6991 million people, of whom 5,162,600 foreign tourists and 2,536,590 Bulgarian citizens. In 1989 it has 108 hotels with over 27,000 beds and over 130 restaurants, entertainment places and taverns, nightclubs, bars and discos, cafes and aperitifs. Its rapid growth makes it the largest resort on the Bulgarian Black Sea coast. In the south the complex already connected with the new part of Nessebar. International Airport is located 30 km from Sunny Beach. The resort has a beach with a length of about 10 km and a width of 30-60 meters with fine golden sand and natural dunes, which grow 16 species of rare plants, flat sandy bottom. The climate is characterized by 1700 hours of sunshine from May to October. Beds of the hotels were more than 300 000. There is a large list of entertainment: surfing, water skiing, sailing, tennis clubs, horse riding, bowling, indoor and outdoor pools, mini- golfs. There are many restaurants, shops and stalls (over 15 000). 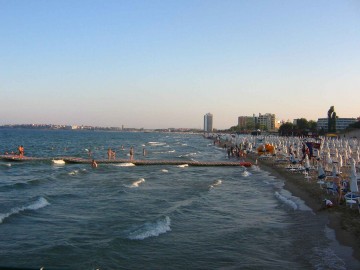 More than 50 years ago, on June 8, 1959, the complex was registered the first foreign tourist - Frantisek Silmestar - czechoslovak from the city of Ostrava. He is vacationer staying in a hotel "Kalina", and his name remains forever recorded in the book chronicle the resort. In the early history of the resort, and the entire South Coast, have there were a little more than 20,000 holiday beds. Since 1989, the basis of Sunny Beach is increased at least tenfold and South Beach hotels, apartments and other accommodation establishments offering half a million beds.
Interesting, but not many know about Sunny Beach:
* The design of the complex began in 1957 when a working team, headed by arch. Nikola Nikolov, develops projects and schemes for hotels and restaurants. The design team was formed by young and unknown, but talented and ambitious professionals. Projected on the object themselves. Forever linked their names with Sunny Beach are the architects: Lily Stoicheva, Alexander Ovcharov, Ivan Kasarov, Hristo Koev, Sabina Kouteva Salabashev, P. Sokolowski; the engineers Ludmila Antonov and S. Kovachev.
* The first sod was turned on the subject № 4 turned later in the cafeteria "Oasis". Modestly and without celebrations, on 1 September 1958 it was attended by engineers Noykov Dimo Stefanov, technical managers Zheko Benchev, Stefan Kesarovski, Atanas Kozhuharov, three workers - Nikola Petkov Topalov, and Ilarion Petkov from Nessebar and Peter Golev.
* Along with the construction of the complex started and designing the park. Its designers are engineers Boris Georgiev, Valentina Atanasova, Vencislav Kozhuharov, Jordanka Velichkova. First forestation was guided by engineers L. Dimov, D. Nikolov, and Petkov, Peev.
* The first restaurant "Neptune" was opened on June 1, 1959, and his manager is Nicola Tchervenkov.
* On September 1, 1958 to July 1959 in "Sunny Beach" put into operation the first 30 Hotels and 4 chalets with 2655 beds, 5 restaurants with 4102 seats and tourists exceeded 18,099.
* In 1959, at the end of the season the number of foreign tourists amounted to 14,022, of which only 128 were from non-socialist countries. 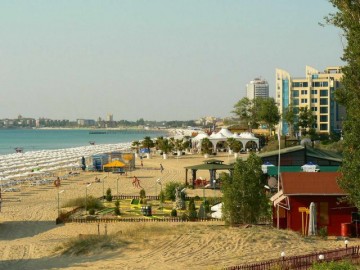 * The first director of the tourist company "Sunny Beach" is Anastas Karolev. He alone of the leaders spoke foreign languages ​​- Russian, French and German.
* The highest hotel to the start of the privatization of the complex remains "Kuban". The largest hotel complex was "Continental" - 1580 beds and at least "Acacia" - 20 beds.
* The first edition of the Festival "Golden Orpheus" took place in Bar “Variete” on August 1, 1965 under the slogan "Songs for the Bulgarian Black Sea coast". The music festival takes the name "Golden Orpheus" in its second edition and remained with that name until the end of the musical event.
* The five million tourist is the 17 ​​-year-old Vladimir Vladimirovich of Omsk, USSR, who was registered on June 15, 1981.
* On June 9, 1985 at the resort "Sunny Beach" opens holiday village "Elena". The new facility has 240 two-and three -storey villas. Prime Minister Andrei Lukanov was present at the opening. First governor of the settlement is Garnenkov Marin.
* In 1989, when we celebrated the 30th anniversary of the resort, it has 108 hotels with over 27,000 beds and over 130 restaurants, entertainment and taverns, nightclubs, bars and discos , cafes and aperitifs.
* At the end of September 1989 the number of tourists in Sunny Beach exceeds 9.147 million people.
* The first management address of the Bulgarian movement "Blue Flag" is in Sunny Beach.
* Sunny Beach is the first Bulgarian resort awarded the "Blue Flag". The flag was raised by a ritual on the beach in front hotel "Europe" on July 4, 1995. 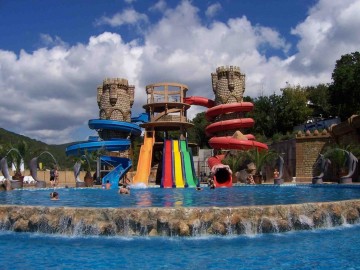 * "Sunny Beach" EAD is a joint stock company with 100 % state-owned until March 14, 1994, when they announced the privatization by the Privatization Agency.
* On July 16, 1997, after the sale of the state of 25% of the capital by the first wave of mass privatization, the name of the Issuer was changed to "Sunny Beach" AD.
* On June 8, 1999 the resident tourists in Sunny Beach are 4713 of 22 nationalities. With them, the number of tourists from June 8, 1959, resided in the complex according to official statistics, reaching 9,338,220.
The landscape of Sunny Beach is flat, differing significantly from that of other major Black Sea resorts. The seabed is sandy with a gradual slope without surprising depths. The beach has a length of 5500 meters and an average width of 40-50 meters, built of fine sand. In the western part there are dune formations representing national reserve with a total area of ​​86 hectares. 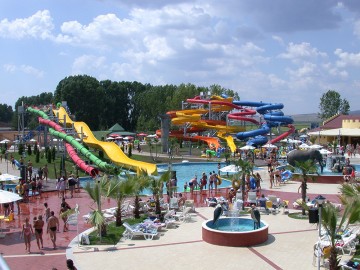 The average monthly air temperature in the high tourist season does not exceed 25-26 degrees, and the average monthly humidity varying 60-65 percent. The period from June to September is characterized by a minimum number /3-4/ cloudy days per month and maximum number /20-25/ clear days. Sunny Beach is a place favorable for recreation and tourism climate, if the duration of the tourist season - more than six months a year.
On the territory of Sunny Beach today there are more than 200 hotels, five stars, four stars and over 100 amusement facilities, including the largest water park on the Balkan Peninsula - "Aqua Park". Hotels offer all the possibilities for recreation - indoor and outdoor pools , green parks and gardens , sports facilities , restaurants, day and night bars, entertainment facilities, beauty salons, spas and more. 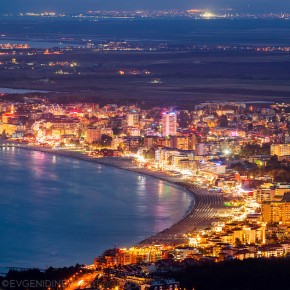 For sports fans Sunny Beach offers tennis courts, basketball and volleyball courts , mini golf, bicycles and rowing and sailing boats, scooters, water-skiing, pedal boats, parasailing and more. Established was an equestrian center with well trained horses and qualified instructors in riding. Organized are excursions by land, sea and air, which include interesting trips to the different monuments of Bulgarian culture.
Bulgarian style restaurants recreate the unique Bulgarian historical traditions and specialties offering also national and European and Asian cuisine. Modern nightclubs and discos create the musical magic of nights in Sunny Beach. The amusement places in the complex make it a holiday paradise for children.
For tourists in the resort Sunny Beach are organized a number of events such as a visit to a Bulgarian village, where guests are greeted at the door with bread and salt, and the sound of bagpipes in old Bulgarian clothing. Also a rally safari where lovers of extreme adventures run down the steep mountain slopes, visits of Bulgarian monasteries, trips to cities and historical monuments of the Bulgarian Revival. 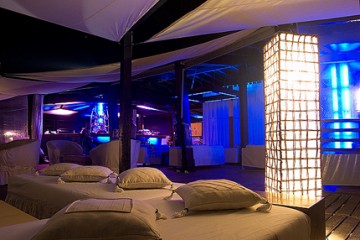 In the southern part of the resort Sunny Beach is bordered by the town of Nessebar - a unique monument of Bulgarian culture, city museum - protected by UNESCO. In Nessebar can be seen more than 40 medieval churches, some of which are well preserved to this day, remains of an ancient port city walls, old houses with bay windows and more. The city is unique with its atmosphere, steeped in history and romance.
Sunny Beach, offers opportunities for development of congress tourism. Almost all hotels offer opportunities for year-round operation and have comfortable conference rooms, where you can organize seminars, symposia, conferences and more. Architecture design, combined with opportunities to experience the cultural and historical heritage of Bulgaria makes this world famous tourist center preferred by millions of tourists.