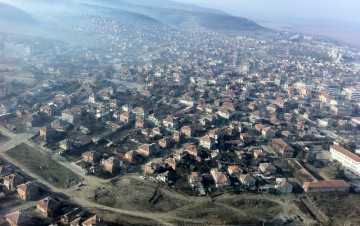 Sredets municipality is located in Southeast Bulgaria and is one of the largest in area municipalities in Bulgaria - occupies an area of 1146 sq km - 1 % of the country. It is an important crossroad of three regions: Southern Black Sea Coast, South Central Region, Turkey. Sredets municipality borders the municipalities: to the east Sozopol and Malko Tarnovo, in the south with Turkey, in thesouth-west – Boliarovo, west- Elhovo, Yambol, Straldzha and in the north with Kameno. It is a crossroad of roads to Elhovo, Yambol, Karnobat and Bourgas, Sredets is an important Auto transport center for the settlements in the middle part of the Strandzha Mountain.
Areas in the southeastern part of the municipality within the buffer zone of the Natural Park "Strandja", the "Bojura" which is set for a recreational area - these are the places for the prospective development of tourism in the municipality. The municipality has a varied terrain, in the southern part of the municipality it is hilly and mountainous, include the northern spurs of the Strandja Mountain in the northern plains, covers parts of Burgas lowlands. The altitude is 30 to 700 meters.
Hydrographic network is unevenly - thicker in the southern part, the rivers have variable water regime.The municipality of Sredets have formed the upper and middle reaches of rivers and Sredetska Fakiyska.
The climate is Mediterranean with the Black Sea climatic influence. Winters are mild, cool spring and comes later compared to the lowlands. Summers are hot and dry and the autumn - long and warm.The average annual temperature of Sredets Municipality is generally 11-12 ° C.The average January temperature is 1-2 ° C.The average July temperature is 22 ° C to 23 ° C.Annual rainfall ranges from 650 mm to 800 mm in the lower parts of the higher parts of the municipality.In the area prevailing north and northeastern winds. 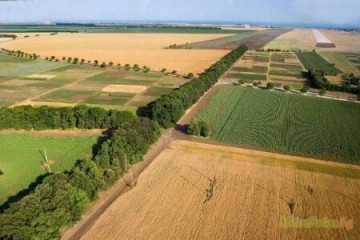 Sredets Municipality has abundant reserves of nonmetallic minerals - clay stone materials, sand, limestone and more.
The proportion of Class II roads to total road network is 17.5%, there are no highways and roads of class I. The municipality is serviced by major transport routes of regional and international importance: Burgas - Sredets - Yambol, Burgas - Sredets - Elhovo, transport links with Malko Turnovo - Istanbul, Bosnia - Tsarevo /south coast/.
Tourism
Sredets municipality is located close to the most developed tourist region in Bulgaria - Bulgarian Black Sea coast. Town of Sredets is located only 30 km from Burgas - the largest port city in Bulgaria, with an international airport, train station. In the town passes the shortest path from southeastern Bulgaria's Southern Black Sea and Turkey.
In 2002 municipality implemented a project funded by the PHARE program for the construction of a tourist office and eco Sredets – the Bojura area.
The wealth of game provides great opportunities for hunting tourism. There is also an opportunity for bird watching. There are nests of some of the rarest birds listed in the Red Book of Bulgaria such as the black stork, golden and small eagle.
In mountainous parts of the municipality passes river Fakiyska that offers suitable conditions for camping and fishing. For lovers of sport fishing it is possible to practice at the dam in Sredets, village Momina Tsarkva and others. 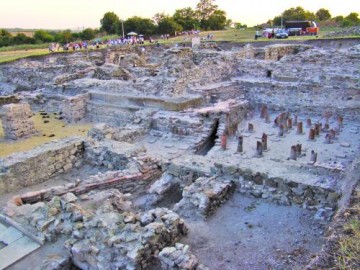 In addition to natural resources, an essential factor for the development of tourism in the municipality is the anthropogenic resources. These include cultural and historical monuments and sites, museums and expositions, sporadic and periodic events and activities. Sredets is an old settlement founded in the end of 5th century as a military strategic stronghold. Debelt Village is located 8 km east of Sredets and is part of the ancient Deltum colony. It was founded in the late 70s of the first century after Christ.
Here is the only one studied medieval customs complex with a church on the Balkans. It is assumed that there is where Boris I converted to the Christianity faith.
Strandzha region is rich in historical and tourist attractions. Dolmens, Thracian tombs, mounds and tombs and more.
The Municipality Sredets has 14 theater centers. One of their main activities is the library. In 2006, the library in Sredets was expanded and equipped with modern library furniture, computers, internet, new program for automation of library processes. 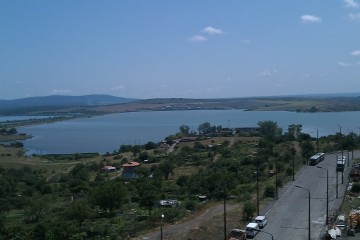 Mandra dam lake
It is the southernmost and largest of the 4 Burgas lakes with water surface area of ​​about 1300 ha.
It is 8 km long and 1.3 km wide. It is situated in a well-shaped river valley, oriented perpendicular to the beach as the mouth and the dam are near the southern end of Burgas. 4 rivers flow into the lake: Izvorska, Fakiyska, Sredetska and Rusokastrenska.
The lake has been preserved in its natural state until 1934, when he made adjustments to some of the rivers and dams built in the western part to prevent spring flooding. The second major change occurred in the lake in 1963 with the construction of a dam in the eastern part. That way were destroyed part of overgrown with marsh vegetation shoals, also the lake was disconnected from the sea and it is entirely freshwater. Large reed beds disappeared, and with them the convenient nesting sites for herons, pelicans, ducks and others species of birds. This destroyed the only colony of white pelicans in Bulgaria.
Coast "Mandra" covers the northern slopes of Strandzha. They are characterized by typical forest greenery- snowdrop, crocus and etc.
The most valuable parts of the lake have been placed under protection Uzungeren protected areas, Poda and estuary of river Izvorska (area 151 ha).
Community centers are the center of spiritual life in the municipality. Their largest events are associated with the traditional calendar of the Bulgarians - Kukeri day, Easter gatherings, Christmas holidays and more. Groups and ensembles participate in all major events of regional and in some national ones. Youth formations of Sredets and Debelt have several guest performer groups from Turkey, Macedonia, Serbia and Ukraine.
Sredets Municipality and local Theater "Probuda" are the main organizers of the National Strandja - Thracian folk fest "Folk wreath - Bojura" which was held for the fourteenth consecutive time in 2006. This major cultural event confirms the position of the municipality as a center of attraction for the work of young talents to keep the tradition and continuity between generations.
In the field of cultural heritage and museum work continues for conservation and preservation of museum units. Conducted were archaeological excavations in the fortress "Kale" near Sredets. There are active excavations conducted on the territory of the archaeological reserve in village of Debelt. The construction of a permanent exhibition was started. 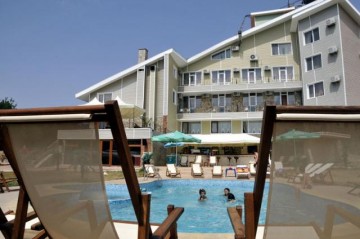 Reconstructed and renovated was the ethnographic complex - Karabunarska house. A renovation and modernization of exposure Baylova house is about to begin. Historical Museum Sredets works seamlessly with the regulations in the field of museum work.
The only monastery in Strandja Mountain, south of Bourgas region - the monastery "Zhivopriemnii iztochnik" is located in the municipality, near the village of Golyamo Bukovo.
Town of Sredets has ancient history. It is an old Bulgarian town established near the ancient settlement. Good weather, strategic location and the fertile lands attracted the attention of Thracian tribes that inhabited the region – odrysae, nipsei, skirmiani. The territory of the current municipality is part of the Roman province of Haemimont, for which proves are the many fortresses. Since Roman times, here is passing one of the most important roads to Vization - Constantinople - Istanbul, which retains its importance in the coming ages. During the Ottoman rule the town was called Karabunar and this name is found in the Turkish registers from 1676-1731 year. Under this name is reported by many travelers of the 17th and 18th centuries, that crosses Strandja on the way to Istanbul or vice versa.
Gradually the town was formed as a market town, and this characteristic continues after liberation in 1878. 1925 it is a district center and as a town it was announced in 1960. 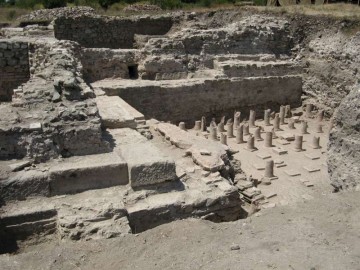 The municipality is rich in historical, archaeological and ethnographic monuments like the ancient city Deultum, late ancient and medieval fortresses in Debelt, Sredets, Fakia, Rosenovo, Bogdanovo, Bukovo, Kirovo, Yabalkovo- Gorno and Dolno, Momina Tsarkva and others; mounds in Kirovo, Gorno and Dolno yabalkovo, Bogdanovo, Fakia and others, ethnographic houses in Momina Tsarkva, Bukowski monastery. Presence of a temporary exhibition of archaeological materials and ethnographic exhibition in Sredets, National Archaeological base "Deultum - Develt" - Debelt. The territory of the municipality is the only monastery in the south of Bourgas region - the monastery "Zhivopriemnii iztochnik".
For the first time the village was mentioned in the itinerary in 1595 under the name Karabunar, which means in Turkish "black well". In 1651 Evliya Çelebi in his notes says that in Karabunar has a caravan - serai (inn) with a harem, park for camels and 3000 cattle animals. Swedish King Charles XII in 1713 stayed in the inn Karabunar on the way to Constantinople. In 1762 village of Karabunar had 600 houses and was one of the largest villages in the area. Father Stoiko Vladislavov - Sophronius of Vratsa a was a teacher here in 1792 – 1793. Due to plague in 1795-1796 the village suffered losses and only 150 houses left. The soldiers of  Kara Feizi looted and burned the settlement in 1801. After the Russian- Turkish war 1828-1829 according to the Odrin peace contract 70 Karabunar families emigrated to Bessarabia. In 1858 with the sultan agreement was built the church "Vseh Sviatih". In 1868 Vasil Levski passes through Karabunar. On February 16, 1878 the village had its liberation. After the liberation Karabunar became the regional center. In 1922 - 1923 here was a teacher Todor Grudov activist of the Communist Party. Same was the mayor of Karabunar from May to November 1922. According to the directive of the Bulgarian Communist Party in September 1923, he organized armed group in the village and headed to Burgas. Near the village Karabair (now Meden Rudnik) and around the old station Burgas (now railway station Vl. Pavlov) become shootouts where some were killed or wounded. The settlement was renamed Sredets after the change of the government in 1934. In 1959 it was renamed again Grudovo named by Todor Grudov. And in 1992, by decree of the President it was renamed Sredets again.