Plovdiv Bulgaria, Information about the city of Plovdiv

The Bulgarian town of Plovdiv is situated along the two banks of the river Maritza with its slow water, and also on a number of picturesque hills (called 'tepe' by the local people) that are part of the town's charm and beauty. Plovdiv is located in the Southern/Central part of Bulgaria. Being the second largest city in the country, it has a population of 350'000. Plovdiv is divided into two parts - the old town Stariyat grad, which occupies the three eastern hills, and the lower town spread in the plain below. The modern town offers entertainment and vigorous sights but the old town /conveys best/ carries the atmosphere and the culture of the city. The ancient part of the three-hill town is an architectural reserve. The Ancient Plovdiv has preserved until nowadays the atmosphere of the Renaissance. 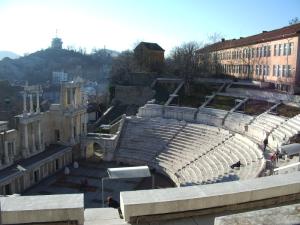 The modern town is a trade and culture centre. It is a bunch of museums, churches, banks, hotels, cafes, restaurants, cinemas, shops, bars, bazaars, music clubs, casinos etc. Here rest the ruins of a Roman stadium and remnants of the Roman forum, here could be also seen several mosques and original Turkish baths. The modern centre provides entertainment and rich cultural life. In the Fair Camp different international exhibitions and expos are held all year round. International Fair - Plovdiv is committed to organize the biggest, most prestigious fairs and specialized exhibitions in Bulgaria. Around 4 700 companies from 50 countries participate annually in events staged by International Fair - Plovdiv. Over 600 000 attendees visit the Fair Ground. These figures attest that International Fair - Plovdiv not only takes the lead in the exposition activity in Bulgaria, but it is also one of the biggest Fair Hubs on the Balkans.
International Fair - Plovdiv is a meeting point for establishing business contacts between leading national and foreign companies in the area of industry, trade, services, science, culture, and other fields of economy and development. The flat relief of the Plovdiv valley allows the development of a sophisticated road network. Across the region's territory, there are 59 km of the "Thracian highway"; first class roads are 129 km long, second class roads - 227 km, and third class roads - 652 km. The remaining 1000 km roads are municipal.
There is a kind of magic in Plovdiv in all seasons. The town is always unique and fascinating. In the winter it is fabulously white; in the spring it is covered with green and flowers, in the summer it is almost unreal in the ghastly heat of Thracia, in the autumn it is calm and placid, with ripe figs and sweet grapes dropping into soft foliage... Plovdiv can hardly be described in simple words... One should see it and feel its unique atmosphere in order to understand it.