The town of Kyustendil has 50 243 inhabitants and is 525 m above sea level. It is situated in the most western parts of Bulgaria, only 27 km in the air from the three borders - Bulgaria-Macedonia, Bulgaria-Serbia and Serbia-Macedonia. 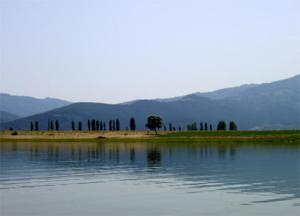 The town lies in the most southern part of the fertile valley of Kyustendil, on both banks of the relatively small River Banshtitsa, leaning on the most northern slopes of the more than 2000 m high Ossogovo Mountain bordering with Macedonia. Quite close to the south of the town flows the big bulgarian river Strouma. The town is 90 km south-west from Sofia, 70 km south-east of Blagoevgrad, at 40 km west of Doupnitsa and at 22 km south-west of the border point with Macedonia - Gyueshevo. The town is a spa resort of national significance. A regional administrative centre.

Kyustendil is one of the most ancient towns in Bulgaria. Fertility and the warm mineral springs attracted the Thracian tribes of danteleti and peontsi, which founded here a settlement far back in 5th-4th century BC. During the 1st century the Romans turned it into an important fortress, trade venue and renowned spa resort, calling it Pautalia. In 4th century the fortress Hissarlaka was built later reconstructed by the Byzantine Emperor Justinian I (572-565). After 553 the name Pautalia is not accounted any more. In 1019, in the Charter of the Byzantine Emperor Vassilii II, the town was mentioned by the name Velbuzhd, probably after the name of a leader. It was integrated to the Bulgarian State during the reign of King Kaloyan (1197-1207). From 1379 to 1395 feudal ruler had been Konstantin Dragash and by his name, later in the 16th century, the town was renamed Kyustendil (the land of Konstantin).

From the middle of the 15th century the Turks began to colonise massively the town and subjected the Bulgarian population to assimilation. In the end of the Ottoman domination and after the Liberation, in particular, the ethnic make up changed due to the numerous Bulgarian emigrants from the lands remaining under Ottoman rule and from the neighbouring settlements. During the Revival the town rapidly grew and developed. A church school was opened (1821), its inhabitants took active part in the ecclesiastical and national struggles. The detachments of haidouts (armed volunteers), lead by Ilyo Voivoda and Roumena Voivoda, one of the few women leaders in Bulgarian history, were very active in the surrounding mountains. Kyustendil was liberated on 29th January 1878. After the liberation some of the crafts depending on Turkish markets declined, but tobacco production developed, as well as spa resort activity.

The Municipal Museum of History was founded back in 1897. Each of its departments is accommodated in various cultural and historic monuments: The Department of Archaeology - in a house built in 1575 and notable for its architecture. The Revival and National Liberation Struggle Department - in the house of Ilyo Voivoda, and Ethnography Department and Post-liberation Development Department - in the Emfiedzhiev?s House, where the commander of the Russian troops was accommodated during the Russian-Turkish War.

The Vladimir Dimitrov - Maistora Art Gallery is a sight of a particular interest.. It occupies a separate building marked by an original architecture and a modern interior design. The main part of the exposition consists of over 200 masterpieces of the national painter Vladimir Dimitrov?Maistora (the Master). Works of some of the most outstanding artists like Kiril Tsonev, Assen Vassilev, Stoyan Venev, Nikola Mirchev, Boris Kolev and others, who were born or lived in the region are preserved and exhibited in the gallery. An impressive monument to the Maistora is erected in front of the gallery.

The Asclepion of Pautalia is an impressive Roman spa and shrine, dedicated to the god of health Asclepius, built in 2nd-3rd century. The whole building occupied an area of 3500 square metres. Large premises with a heating system, water pipes, architectural fragments etc. have been discovered. It is located in the foundations of today?s buildings of Chifte Banya and the Ahmed Bei Mosque. Other remarkable sights of the town are the following: St. Ge-orgi Church (12th-13th century) in Kolusha Quarter, The Holy Virgin Church (1816) and St. Dimitur Church (1866), Pirkov?s Tower (16th-17th centuory), the wall of the Devehani Inn (1606), Lekarska House, Prokopiev?s House, the old school (from 1849). There are monuments dedicated to the Russian soldiers who perished for the liberation of the town from Ottoman domination, other monuments, commemorating the heroes in the wars (1 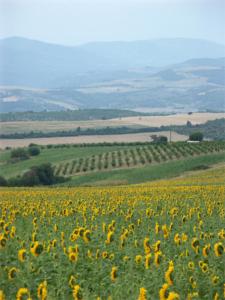 One of the most valuable treasures of the town is the mineral water which springs out of 40 springs in the foot of Hissarlaka with temperature up to 73.4 C. There are several spas, 3 open-air swimming pools, sanatorium, recreation facilities in Kyustendil. The town and its surrounding areas are well-known as the Orchard of Bulgaria - mostly cherries, plums, apples, etc. are grown there.

In addition to the resort facilities, there are several hotels in Kyustendil: Velbuzhd Hotel, Pautalia Hotel, Sport Palace Hotel, Hissarluka. As regards catering - there are no problems. The town offers a large agricultural market, shops, nice catering facilities, etc.

Kyustendil is connected with the other parts of the country by bus and railway transport. The town maintains regular every hour bus line with the capital city, as well as with all neighbouring larger towns - Pernik, Doupnitsa, Blagoevgrad and etc. There are regular bus lines to all villages in the region. Due to its closeness to Macedonia, there are enough lines to this neighbouring country. The bus station and the railway station are next to each other in the northern part of the town. The town is a main station on the Sofia-Kyustendil-Gyueshevo railway line, and in near future it will be linked with the railway network of Republic of Macedonia. Town bus transport functions within Kyustendil.

In close proximity to the south of the town, at the lowest foothills of Ossogovo Mountain, is situated Hissarluka Park. The remains of a fortress, a hotel, catering facilities, walking alleys, alcoves, beautiful villas are situated amidst a splendid coniferous forest, planted in the end of 19th and the beginning of the 20th century. The Spring Festival (organised about 22 March) is annually held there. Kyustendil is the outgoing point to the beautiful Ossogovo Mountain with many sights of interest. A marked hiking route leads consecutively to the village of Bogoslov (1.30 hours, there is an asphalt road from Kyustendil to Trite Buki Chalet - 5 km), to Iglika Chalet (about 3 hours, it makes 11 km along the road), to Ossogovo Chalet (4.30 hours, 17.5 km along the road) and to Trite Buki Chalet (about 5 hours, along the road 19.5 km, the highest chalet all above-mentioned - 1550 m above sea level). Regular bus transport from the town can be used to the village of Bogoslov. Trite Buki Chalet is a basic outgoing point to many marked hiking tracks across Ossogovo Mountain, to many peaks around, as well as to the highest peak of the mountain ? Mt. Rouen (2252 m, situated on the very border line with Macedonia - 4 hours). 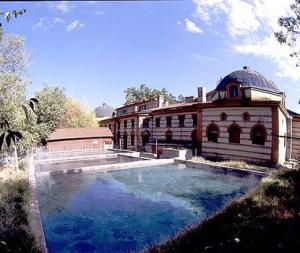 More information about the mountain can be obtained by the Tourist Association in the town. 13 km to the south-east of Kyustendil in Nevestino village (a bus stop of the lines between Kyustendil and Doupnitsa) is located Kadin (Nevestin) Bridge over the River Strouma - one of the biggest engineering and construction facilities in our country from 15th century. It was built of hewn granite in 1469-1470 on the ancient and very important in the past Tsarigrad-Plovdiv-Samokov-Kyustendil-Skopie road. It has 5 impressive vaults. A commemoration inscription is preserved. The village of Shishkovtsi is 10 km away from the town to the north and a large collection of pictures of Vladimir Dimitrov ? Maistora, who lived and worked here for 27 years are preserved in its fund. The village is a station on the railway line Sofia-Kyustendil-Gyueshevo. It has bus connections with the town. 39 km to the north of Kyustendil, on the line to Sofia, the town of Zemen is situated and in its vicinity is the historic Zemen Monastery, built in the 11th-12th century. Its murals are the most valuable ones from 14th century in our country. Along a 22 km distance from the town of Zemen to the village of Ruzhdavitsa, between Konyavska and Zemenska Mountains, Strouma River has created a rare, picturesque beauty, called Zemenski Gorge. It is a miniature copy of the Iskar Gorge. There are queer rock formations - Agapie, Saraya, Galabinski rocks, Ritlite, vigorous karst springs, unexplored caves, picturesque meanders, sideways running waterfalls, of which the most impressive is the Polsko-Skakavishki Waterfall (50 m) below the village of Polska Skakavitsa (there is a railway stop).

At the end of the gorge, near Ruzhdavitsa village, one can enter into the fantastic canyon of the desiccating River Shegava (left tributary of Strouma). The railway line Sofia-Kyus-tendil, from where the whole gorge can be very well observed was laid out in the Zemen Gorge in 1909. There is no road and one can only walk along the railway track.