Elhovo has a population of 13 629 and is 130 m above sea-level. It is situated on the left bank of the Toundzha River in the fertile field. It is 339 km south-east of Sofia, 37 km south of Yambol, 30 km north-east of Topolovgrad and 94 km south-west of black sea coast city of Burgas.

A Thracian settlement called Orouditsa existed at the place of the present town. The Roman conquered it, fortified it and gave it the name of Orouditsa ad Bougoum. Later the Byzantine called it Malso Kastra (fortified settlement) until the arrival of the Slavs who gave it the melodious name of Yanitsa which consequently changed into Enina.

In the years of Ottoman Rule the town was an agricultural, crafts, and administrative centre. In 17th century it had a market street with more than 40 wo 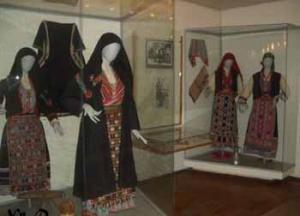 rkshops. However, the town became depopulated after several epidemics, the devastating kurdzhalii (Turkish brigands) raids, and the Russian-Turkish War of Liberation (1877-1878). A great part of the population moved to Dobroudzha, Bessarabia and Russia. At the time of the Liberation one could count 100 houses and 900 inhabitants. In 1934 the town was renamed to Elhovo.

The Town Museum possesses one of the richest ethnographic expositions in the country. Of special interest are the collections of folk crafts samples and costumes of Bulgarians immigrants from Aegean Thrace, Lozengrad region and Odrin region.

Buses and trains. There are regular bus lines to Sliven, Yambol, Bourgas, Sredets, Topolovgrad, Svilengrad, and other smaller villages and towns in the district. Elhovo is the last railway station (tel.: 0478 2494) on the railway line Yambol-Elhovo connecting the town with the national railway system.

Colchis pheasants are breeded in the area of Papazova Koria, 5 km north of the town. Visitors can see the birds. There is a regular bus.