History: The first traces of life in the town date back to the antique epoch. Remains of a Roman settlement (3th-4th century) were discovered to the north of the centre and in the eastern part. An ancient Bulgarian settlement existed here in 8th century. The modern town sprang up in 15th century as a big market village Unofficially the settlement was known as Kourkouskelya (dry port). According to the Turkish traveller Evlia Chelebi who visited the town in 1651 the latter numbered 2000 houses distributed in 7 quarters. It used to be a brisk trade and craft centre with 3 inns, 200 workshops, and a bazaar (market place) with 100 workshops. At the end of 18th century and the beginning of 19th century a lot of Bulgarians from the regions of Odrin, Kotel and Turgovishte settled here. In the course of 18th century and part of 19th century the town happened to be in the centre of the battle field of the Russian-Turkish Wars. Three times had the town been liberated for different periods of time before the War of Liberation of 1878. The first Bulgarian church in the town called St. Georgi was built in 1843. In the following year a monastery school in the church was opened. The town hospital was opened in 1866, and 3 years later started its urbanisation. In 1872 the first class school opened its doors.

During the Russian-Turkish War of Liberation the town gave a lot of translators, guides, and victuallers in help of the Russians. The army of general Zimmerman liberated the town on 27 January 1878 without leaving any damage. In 1882 at the insistence of the local inhabitants the town was called Dobrich (after the name of Dobrotitsa, Bulgarian leader in medieval times, ruler of the area). The town had four delegates at the Constituent National Assembly held in Tarnovo. The opening of the railway line Razdelna - Dobrich - Kardam in 1911 and its extension to the Romanian town Medgidia in 1916 gave an impetus to its development.

This Bulgarian town continued to suffer from the vicissitudes of fate. The first Romanian occupation lasted till 1916, and after the Neuilly Agreement of 1919 was again included in the territory of Romania until 1940 when the Krayova Agreement was signed; and by means of peaceful mechanisms South Dobroudzha was once and forever given back to Mother Bulgaria. On 25 September 1940 the Bulgarian army entered Dobrich; since then this date has been the official holiday of the town. From 1949 till 1991 the town bore the name of Tolbouhin but after that it regained its old name. At present it is the centre of the largest grain-belt in the country called the Bulgarian granary. The town was closely associated with the life and works of Yordan Yovkov, a great Bulgarian writer. The actress Adriana Boudevska was born here.
Landmarks: Yordan Yovkov Historical Museum. The Ethnographic House Museum is in one of the most interesting Revival houses 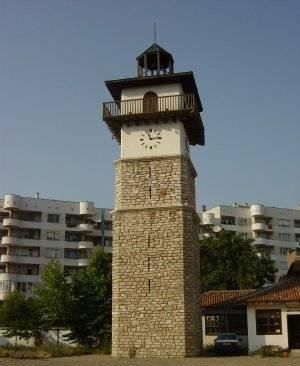 (1861) and illustrates the living conditions, traditions, customs, crafts and culture of particular Bulgarian ethnographic groups emigrating from different parts of the country (the regions of Odrin, Kotel, Turgovishte, etc.). The Ethnographic Complex Stariyat Dobrich (Old Dobrich) has preserved the authenticity of the arts and crafts of the region. Sixteen workshops operate in the area of the museum. The Archaeological Museum. The House-Museum of Yordan Yovkov. The House-Museum of Adriana Boudevska. The Art Gallery exibiting more than 3000 masterpieces of art - icons, paintings, sculptures, black and white drawings, works of applied arts. Military Graveyard Memorial Complex-Museum. The remains of an ancient Roman settlement (3th-4th centuries) in the central and eastern parts of the town. The historical St. Georgi Church. The imposing monument of Khan Asparuh - founder of the modern Bulgarian state, and many other monuments.

Transport: Dobrich has bus and railway transport. There are regular bus lines to Varna, Balchik, Silistra, Rousse, Kavarna, General Toshevo and other smaller town and villages in the district. The bus station is located in the eastern part of the town on the river bank. The railway station is on the line Razdelna-Kardam-Medgidia (Romania), which connects the town with the national and European railway systems. The former is situated in the opposite west end of Dobrich. There is a private transport agency as well.

Surrounding areas: Six kilometres away from the town is Kobaklaka area situated in a thick oak forest. Here is to be found the three-star Dubovete Resort (the Oaks) with a restaurant offering 100 seats with exotic terrace. There is regular bus transport.

The region called Botevska Gora (Botev’s Woods) is 16 km south-west of the town in the immediate proximity of the village of Botevo. Nearby is the Vedrinski Dam offering good conditions for having a rest, taking sunbathes, practising water sports, water tourism, and fishing. Here is a mountain hut named Botevo (reservations in the Dobrotitsa Tourist Association in Dobrich). It offers 24 beds in four-, and eight-bed rooms. The railway station Botevo (on the line Razdelna-Dobrich-Kardam) is a point of departure for the region; all passenger trains halt here. It takes 30 min. to get to the hut on foot. If the railway station of Donchevo on the same line is a starting point then it will take 1 or 1.30 h on foot.

The Batovo valley is 26 km south-east of the town and it offers excellent opportunities for camping, outings, tourism and rest in the realm of the marvellous nature. The Prilep Tourist Hostel offers 25 beds in two rooms. The villages of Batovo (45 min), Stozher (1.30 hours) and Debrene (1.30 hours) are the points of departure. There is regular bus transport from Dobrich to the three of them.