Information about the town of Botevgrad

The town of Botevgrad has 23 516 inhabitants and is 350 m above sea level. It is situated in the valley of the same name, in north foothills of the eastern parts of the Western Stara Planina, along the two banks of Stara Reka River. It is 62 km north-east of Sofia, 57 km and 40 km south-east of Vratsa and Mezdra, respectively, 25 km north-west of Etropole, and 39 km south-west of Yablanitsa.

Botevgrad is a successor of the medieval Bulgarian town of Zelin, which was located 3 km away from today’s town. During the Turkish rule the village was known by the name of Samoundzhievo, famous with its sweet smelling loaves (samouns) of bread. In 1826 in a private house in this village the first school was opened and 20 years later a school building was constructed. Later on a church and a clock tower were erected. In 1866, after the road from Rouschuk (Rousse) to Sofia was moved from the Etropole Gorge to Arabakonak Gorge, the Rouschuk ruler Midhat Pasha issued an order, proclaiming the small village a town. It was given the name of Orhanie after the name of Sultan Orhan. The town served the purpose of guarding and facilitating the travellers passing along the new road. The town was built up following a civil engineering plan, characterised by chessboard-like crossing streets and houses with spacious yards.

The town rapidly grew up and the Hungarian traveller, Felix Kanits who visited it in 1871, wrote that it was the centre of a region, incorporating 25 villages, while its square was it architectural centre and glory. The same year Vassil Levski founded a revolutionary committee, while in the next year the town became a district centre of the Domestic Revolutionary Organisation. During the Russian-Turkish War of Liberation (1877-1878) severe battles were held close to it and the town was badly destroyed. It was liberated on 29th November 1877. At that time it had only 2297 inhabitants.

Its present name (after the name of the poet and revolutionary Hristo Botev) was suggested by the prominent Bulgarian scientist - Prof. Assen Zlatarov. It is the native town of the poet Stamen Panchev and of our well-known linguist, expert in Slavonic languages and ethnographer, Prof. St. Romanski.

The Town Museum of History. Well-preserved are the house, having provided shelter to the Old School, the Ascension Church dating back to 1864, the Community Cultural Centre from 1883, the Clock Tower - a symbol of the town, built up at the central square by master Vouno Markov from the village of Vrachesh in 1866. The town has a number of monuments - to Hristo Botev, to the Russian soldiers, killed in the Russian-Turkish War of Liberation, to the Unknown Soldier, to Granny Koina (heroic mother), to the poet Stamen Panchev.

Transport: Only bus transport is available in the town. It is used to link it to the villages and towns in the region and countrywide. Southeast of the town passes the Hemus motorway from Sofia to Varna, which facilitates and speeds up large portion of its bus communications. There are regular bus lines to Sofia (every hour), Etropole, Yablanitsa, Mezdra, Loukovit, etc.

Surrounding areas: Zelin Resort - 4 km south-east of the town, scattered amidst nice deciduous forests. The monastery “Birth of the Son of God the Holy Virgin” is situated in its vicinity. The resort is a starting point of the route to the Roudinata Chalet (2-3 hours hike along a marked track) within the Bilo Massif of the Western Stara Planina Mountain. There is regular bus transport from the town to the resort. 23 km north of Botevgrad and 3 km away from the village of Bozhenitsa is situated the Bozhenishki Urvich - this is a nationally significant monument of culture. Remains of an early Byzantine fortress and ruins of a rock church and dwelling, where the famous Bozheniski Inscription of Sevast Ognyan was found are well preserved in this area. 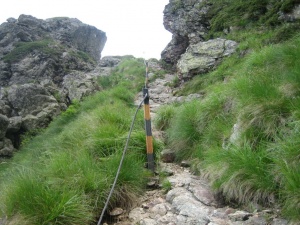 The village of Skravena is 6 km north-west of the town and the most interesting monument there is the church-monument, which until recently kept the bones of the 10 Botev’s rebels, killed at Rashov Dol (now the bones are kept in a channel-house in the centre of the village, opposite the town-hall), and the house of the rebel Miko Stoyanov. The village is a starting point to the “K & N Mukanski Chalet up at the Lakavitsa Hill (6 km - 1.30 hours walk along a marked truck road). There is regular bus transport.

The village of Vrachesh lies at the northern foots of Mt. Mourgash, 3 km south-west of the town. It has ancient history. The settlement has existed there since the 13th-14th century, known as Cheshkovitsa. Today’s name of the village dates back to 1430. There are some remains of an ancient and medieval fortress. The house of T. Kamitlyarski - giving shelter to the headquarters of General Gurko - is also preserved. 4 km south-west of the village is situated the St. St. Forty Martyrs Monastery and to the south, on the Bebresh River is situated the Bebresh Dam - the new artificial lake and the area is turned into a recreational zone. There is a regular bus transport from the town to the village.

11 km east of Botevgrad is the small town of Pravets, birthplace of Todor Zhivkov – head of state for quite a long time. Close to the town there is a large artificial lake, turned into a wonderful place for recreation, sports and entertainment. There is the Pravets Hotel as well as the famous attraction restaurant “Shatrata” (The Marquee). The original marquee-cover was a present by the ex-shah of Iran Reza Pahlavi.