The town of Balchik has a population of 13 766 and is 31 km north and north-east of Varna, 501 km away from Sofia, and is on the black sea coast itself. There is a big harbour used for medium- size passenger and trade vessels.

The place was first inhabited by the Ionians in 5th century BC. They founded a settlement and called it Krouni or Krounoi after the earlier Thracian settlements in the vicinity. The name of the town comes from the Greek word ?izvori? (springs) as 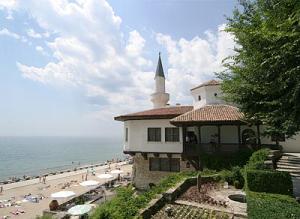 there are a lot of karst curing springs in the area. Later on it was renamed Dionisopolis after the name of Dionisius, God of wine and feasts. Some consider that the town was given this particular name because of the statue of Dionisius thrown out onshore.

The image of this god was on the coins minted here, and the town was also the most important centre, second only to Odessoss (Varna) on the northern Black Sea coast till the beginning of the new era. After a sequence of invasions at the time of the Roman Empire the town fell to decay. Later on it was included in the territory of Bulgaria. In 13th - 14th century it moved to Dzhina Bair, a natural fortification. It was ruled by the Boyar Balik, and so it was called Balchik. After the Crimean War (1853 - 1856) the town flourished and grew into a big corn-trading centre. After the Balkan War in 1913 it was included in the territories of Romania. Struck by the natural beauty of the place Queen Maria built a palace and a botanical garden, a chapel and a villa complex for the Romanian aristocrats. The town turned into a luxurious resort at the time. After 1940 Balchik was again included in Bulgarian territory.

Apart from the palace, the palace complex and the botanical garden ? the biggest and most diverse in the Balkans, the town is attractive to tourists with its ancient atmosphere that has been preserved for centuries now. It is interesting to walk along and observe the Tartar Quarter with the pebbled streets and the houses made of stone and adobe.

The art gallery of the town is very interesting. The is the local museum is housed there as well. The coastal alley, 4 km long, is a nice place to stroll, so are the harbour and the small streets around. There is a small ethnographic museum and a beautiful old church called St. Nikola Church. The Revival complex with the old school in the town is quite well preserved. 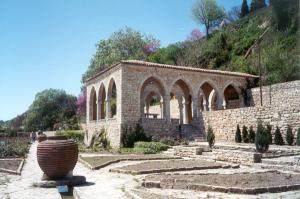 Apart from the big restaurants in the palace, in the hotels and downtown, there are a number of small private restaurants, coastal stalls offering seafood, pizzas, spaghetti and other kinds of European cuisine. The grocer?s shops are a good opportunity for practical tourists who cook for themselves. There is regular transport to Dobrich, Varna and Albena. Apart from buses, there are numerous route-taxis and private minibuses, taxis and water transport to Varna and Albena.

The area of Touzlata is located 4 km east of the town and is well known for its curing mud. A balneo-centre was built here beside the two lakes, formed by old landslides. It receives patients suffering from joint disorders. A large recreational complex, a lot of villas, bungalows and a camping site are built here. There is a mineral spring with water temperature of 31°C. Near Balchik are the two big camping sites ? Sandrino Camping and Beliyat Bryag Camping (The White Shore). They offer various opportunities for rest and water sports, clubs, bars, numerous bungalows for tourists having no camping equipment, small restaurants and stalls for sea and continental food.