Information about the town of Asenovgrad

Asenovgrad Municipality occupies the southeastern part of Plovdiv. It is situated on both banks of the river Asenitsa (Chepelarska Chaya). North covers a small part of the Thracian Plain in the south covering large areas of the Rhodope Mountains, so a significant portion of the terrain is rugged and sloping. Its territory is 615 sq. km. This represents 10.3% of the territory of Plovdiv region and 0.55% of the country. Neighboring municipalities of Rodopi, Laki, Banite, Purvomai, Sadovo. By territory Asenovgrad municipality ranks third in area after Karlovo municipality and Rodopi.
Asenovgrad - The municipal center is the largest town in the Rhodope Mountains and the second largest in the Plovdiv region. It is situated at the foot of the mountain about 220 meters above sea level and is 19 km from Plovdiv, 85 km from Smolyan and about 180 km from Sofia. 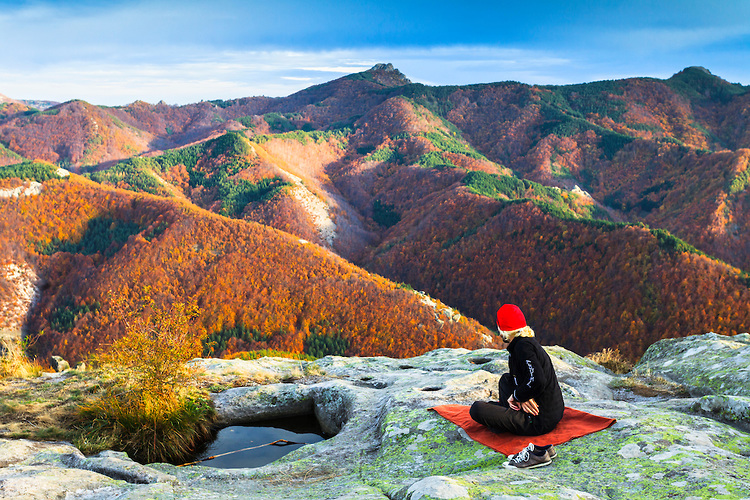 Landmarks
Reserve "Red Rock"
Reserve kept dozens of endangered plant species. It supports 27 of the 50 species of orchids occurring in the country, and a number of relict (prehistoric) and endemic (region specific) species. The fauna in the reserve, and in general in this part of the mountains, it is no less interesting. It supports almost all types of day and night flying birds.
Slivodolsko padalo
Slivodolsko padalo is one of the highest waterfalls in Bulgaria. The waterfall can be reached along a marked trail from the hut Martsiganitsa or path of Plovdiv-Smolyan road (immediately after the first tunnel after Bachkovo). Situated in a picturesque area in the cool forests of the reserve "Red wall" Slivodolsko padalo is the highest waterfall in the Rhodope Mountains (49 m).
Asenova Krepost
The fortress is part of the glorious history of Bulgaria in antiquity and the Middle Ages. Established during the Thracian times the Petrich castle is one of the most important in the Rhodope Mountain. 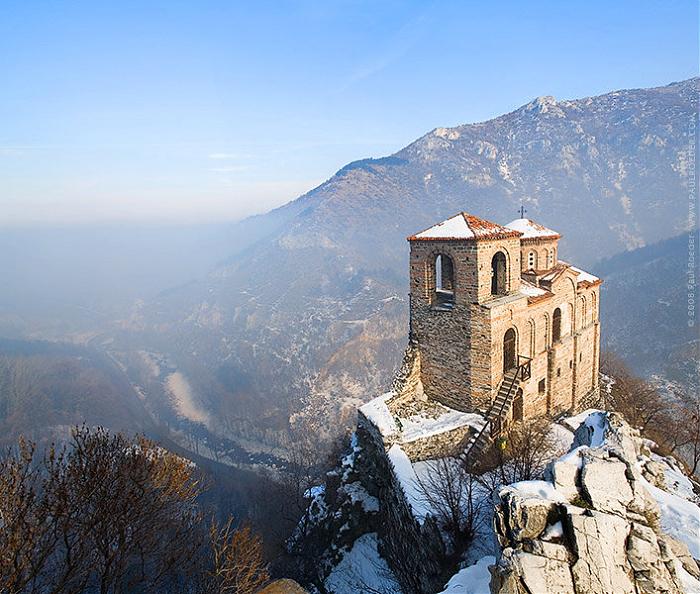 In the first half of the 13th century it reached its most glory during the reign of King Ivan Asen II. Perfectly preserved fortified church "St. Mary" (Petrich) is one of the most remarkable examples of medieval religious architecture in Bulgaria.
Belintash
The rock phenomenon Belintash is prehistoric and ancient Thracian sanctuary, perhaps even "ancient observatory" where priests from the local Thracian tribe Bessi have predicted the future in the stars. Carved by human hands, even in ancient times, rough steps leading to the rock plateau, dotted with hundreds of small and larger holes - sacrificial altars of the priests. Traces of human activity in and around the temples themselves warrant scientists to claim that they were used as places of worship from 13-12 BC, but many believe that their secrets are not fully revealed. With Belintash is related to the cult of the god of wine and merriment Dionysos and his "predecessor" - Thracian Sabazius.
Iconography
The town is one of the few places in Bulgaria where you will see young and old people saying their prayers before the icons of the Virgin Mary. The cult of „holy relics" and miraculous icons has led to remarkably enhance the pilgrimage here - flows of people from far and near participate in the annual religious processions or visit the holy places. In the Rhodope`s Saint Forest are Bachkovski Monastery and Krastova Gora- some of the most revered shrines of Orthodoxy in Bulgaria . 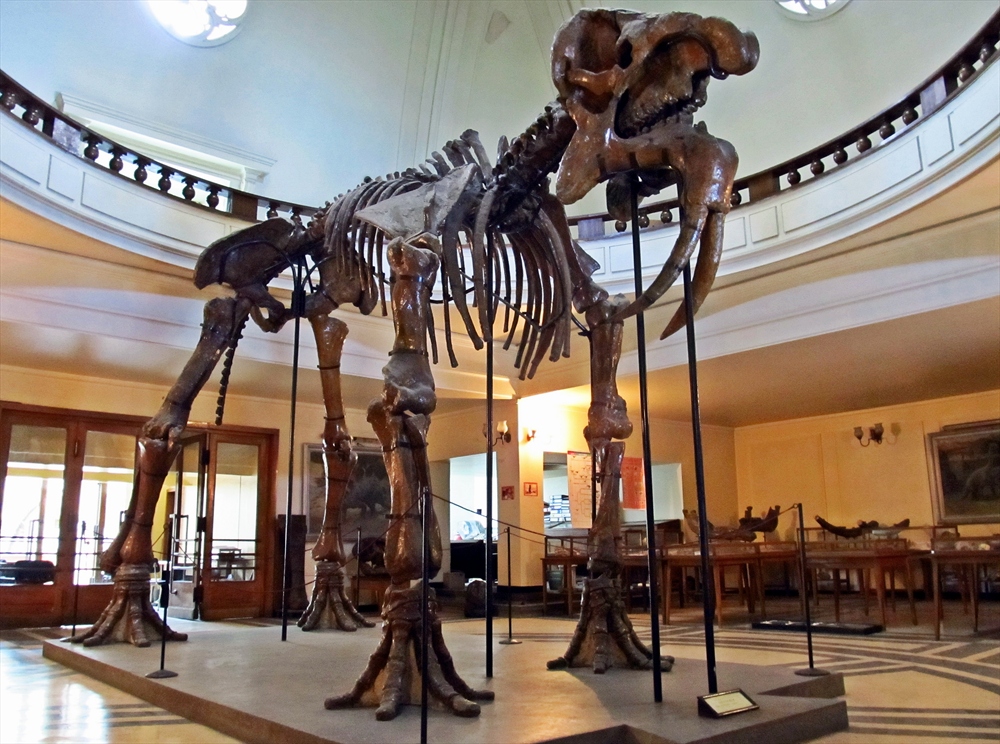 The museum is an integral part of the National Museum of Natural History. It was Initiated by BAS (Bulgarian Academy of Science) based on paleontological collection gathered over decades by longtime biology teacher in Assenovgrad high school Dimitar Kovachev with his students. This is the largest in Bulgaria collection of Neogene vertebrates. Scientific collection of late Miocene mammals includes more than 25 000 samples from more than 40 species.
The first floor of the museum exhibition was made in 1995. It shows the evolution of proboscis animals. Especially attractive of all exhibits is almost 4.5 meter skeleton of ancient Deinotherium found near Ezerovo. Deinotherium is a representative of one of the biggest ever land mammals. Rhodope is inhabited by more than 6 million years ago. Created in 1998-1999 the exhibition on the second floor of the museum reveals in its 30 tables the so called Hyperion fauna of Bulgaria and its diversity. A vision of ​​the ancient nature of this period gave mostly fossil species from the diggings near Hadjidimovo more than at least 8 million years ago.

Projects
Project „On the roads of civilization"
Operational Programme "Regional Development", Priority Axis 3: " Sustainable Tourism Development " Operation 3.2 : "Development of regional tourism product and destination marketing.
Project Beneficiary: Municipality of Plovdiv
Partners: Asenovgrad Municipality and Municipality Rodopi
Project duration: 18 months
Project value: 470 744 Levs
The main objective of this project is to support and promote interest in competitive tourist attractions in the municipalities of Plovdiv - Asenovgrad - Rhodopes , which will contribute to the diversification of the tourism product , reducing territorial concentration and a more even distribution of the benefits of tourism.
Main target groups: tourists and visitors to the destination local population , representatives of travel agencies and tour operators , representatives of the tourism industry and representatives of museums and tourist organizations, specialized groups with scientific and hobby purposes, non-governmental organizations engaged in tourism-related activities, including Advisory Council for Tourism municipalities in the region, tourist associations , professional organizations in the field of tourism, regional and national organizations of disabled people, eco organizations and others. ;
Beneficiaries: tourists from Bulgaria , foreign tourists, students, people in District Plovdiv.
Project activities:
- Development of tourist packages
ViaDiagonalis during the centuries. General route , tracking historical and cultural development of the region over the centuries and presenting the most interesting and popular tourist attractions, while inclusion and cultural values ​​of the other two municipalities - the fortress Belintash and others.
Monastery Tour. Route for pilgrimage tourism, including Rhodope "Sveta Gora " and churches from Plovdiv. 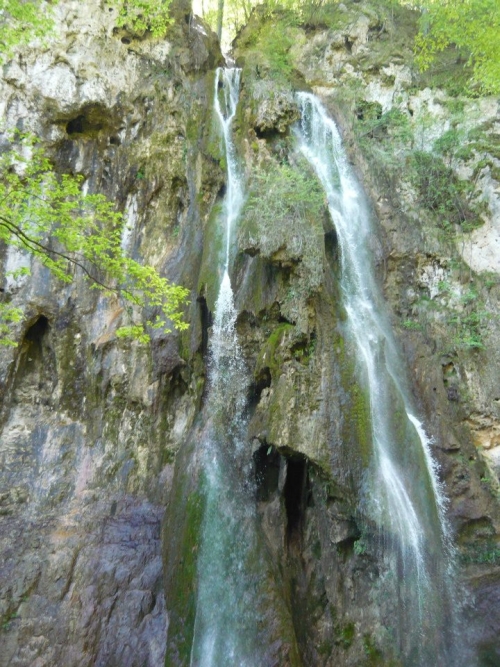 Traditions and Holidays
The town is one of the big wine regions in Bulgaria and therefore the biggest festival of the city is this related to livelihood and this is Trifon's Day, which is celebrated on February 1. This festival marks the beginning of spring treatment of vineyards. Preparations for the festival begin a few days before, and the city is covered by the unprecedented excitement. Each neighborhood has its own center of the holiday - Metoshki neighborhood is gathered in the courtyard of the convent, where the festival is organized by Bachkovo Monastery. In the old part of Stanimaka as it once was called the city, the celebration is in the charge of "St. Nicholas" in the court of which is the chapel "St. Simeon and St. Trifon". On the right bank of the holiday center is the square around the pub Kavardzhiyata where people gather from Bahcha quarter, but up in the meadows around the chapel "St. Trifon " residents gather in the Greek neighborhood Ambelino. Each neighborhood organizers are divided into groups that collect money for a house purchase animals for ritual offering, as well as wood for them. Another group goes around wine houses and gathers wine in a large wine barrel from which they drink all of the holiday. Early in the morning they all go to church for holiday mass. After the service, the priest goes outside reading prayers and blesses the food that they cooked the night before. Winegrowers take some food and wine and go to the vineyards to bless them.
History
Asenovgrad is proud with its big cultural-historical heritage. The successful combination of mountains and the plain, mild climate, fertile soil, and the fact that here was the entrance to the most convenient passage through the Rhodope Mountains, connecting Thracian lands with the Aegean, causes Asenovgrad and surrounding area to be settled since ancient times.
One of the most interesting prehistoric sites in Asenovgrad Municipality is located in the village Dolnoslav in Lopkite area . There was discovered and studied first and only so far in Bulgaria and worldwide Neolithic cult center which activity was religious and other spiritual needs of the prehistoric inhabitants of whole southern Bulgaria.
On archaeological data out of the town has a Thracian settlement that continued its existence in Roman times. No information about the name of the ancient city.
There are many monuments left by the Thracians, who illustrate their rich material and spiritual culture. Very interesting for professionals and tourists are Thracian rock sanctuaries. The most mysterious of these is the sanctuary of Balantash that existed from the Hallstatt to late antiquity. In the area of Assenovgrad were found four shrines of the Thracian Horseman - the deity worshiped by the Thracians in the Roman era.
In the Middle Ages Asenovgrad shares turbulent fate of the region and vicissitudes in the struggle between Bulgaria and Byzantium, by repeatedly changing their masters. The name Stenimahos found in the Statute of Bachkovo composed in 1083 by order of Gregory Bakuriani - Byzantine commander and founder of Bachkovo cloister. On the order of the city are built inn and the strength of his defense. Later in the chronicles of the Crusades, the settlement was mentioned as Stanimaka, Estanimak and Scribentsion .
In 1230, after the Battle of Klokotnitsa king Ivan Asen II reinforces and expands strong Stanimaka Petrich fortress. He celebrated his own cause with an inscription carved above the entrance of the fortress, which was later called Assen and Stanimaka was renamed in 1934 to Asenovgrad.
After the war, the city remained a part of Eastern Rumelia and established as a separate administrative center. During the Unification of Bulgaria on September 6, 1885 its inhabitants involved in a squad, numbering more than 2,000 people.
Glory of Assenovgrad region as a sacred center, formed through antiquity was developed by the advancing Christian religion and culture. Syncretism between existing cults and new faith facilitates the early period of adaptation to it. Churches and monasteries are called to carry out a direct spiritual transformation, so they started building efforts.