Excellent Choice For Investment On The Seaside

This newly built two-storey house is situated just 3 km away from the biggest city on Black Sea coast Varna. The property is located in an elite suburb and pretty close to two of the most splendid resorts on the sea coast St. Constantine And Helena resort (3 km) and Golden Sands resort (7 km). Varna International Airport is just 20 minutes by car but the area enjoys the calmness and tranquility only unspoiled nature can give. Breeze village is situated between the magnificent sandy beaches on Black Sea and the first footsteps of Stara Planina mountain a unique combination of healthy crisp mountain air and a sigh of the gentle sea ripples.

The eight-bedroom house consists of two large and two small apartments which makes it perfect for a small family hotel. There is also a possibility for the two smaller apartments to be connected with the two larger thus turning the house into a spacious seaside holiday home. Total living area size is 500 sq m including 2 garages, two more parking lots and a large basement which can be easily turned into a lovely wine-cellar. The spacious 800 sq m trim yard can also be turned into a lovely garden or a nice barbecue place.

The property is supplied with its own local heating system which runs on gas. There is a well and a hydrophore system in the yard - guarantees regular running water supply for the house. The house is brand new and is built with fine construction materials only to the highest standards. It is completed with PVC joinery, inner and outer insulation, etc. It just needs outer plaster to become the holiday home you are looking for.

Two houses on a shared plot of land in Varna

We are offering you two houses on a shared plot of land located in a vacation area to the north of Varna City. The property consists of a detached house on two floors with area 330 sq m, guesthouse with an area of ​​27 sq m, two garages, open swimming pool and a yard with size 1100 sq m. The distance to the sea is only 400 meters. In front of the property, there is a pine forest. Nearby there are shops and restaurants. The main house consists of: Ground floor (95.60 sq m) - one room suitable for fitness, sauna, wine cellar, tavern. First floor (117.30) sq m - entrance hall, living room with panoramic windows, separate kitchen, dining room and a bathroom. Second floor (116.30 sq m) - hallway, 3 bedrooms, large terrace with sea view and a bathroom. All rooms are finished - equipped bathrooms with sanitary were, granite floors, interior doors, wooden window joineries. The facade of the house is finished with interesting combination of wood and stone! The guesthouse has two floors and consists of a living room with kitchen and one bedroom (also finished). 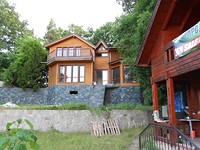 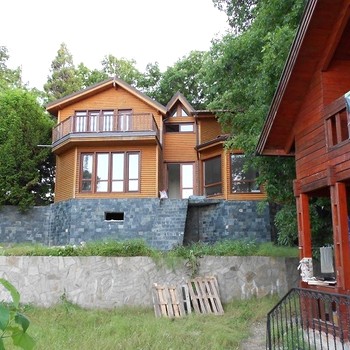 This is another suggestion for a lovely house for sale, situated on the north seaside. The property is located in a villa zone to the north of Varna city. The distance to the International airport and the biggest sea side city of Varna is just 5 km. The area is very well developed and is often visited by many tourists. There are food shops, cafes, restaurants, bus stop with regular transport. The property consists of a large, 4 storey house, and a yard. It is at the distance of just 1 km from the sea. The property is easily accessible all year around. The house is made entirely of brick and meets the highest requirements of construction. It has total living area of 240 sq m spread among 4 floors. The ground floor comprises a tavern and a basement. The first residential floor includes a 2 bedrooms, corridor, kitchen, bathroom with WC. The second residential floor comprises of 2 bedrooms, one of which has a balcony with awesome views, living room with kitchen box, and a bathroom with WC. The third residential floor includes a very large terrace with outstanding views towards the sea. The terrace is 36 sq m in size. There are also two bedrooms and a bathroom with WC on this floor. Each floor has its own private access from an outside staircase. The plot is 1049 sq m large and is well maintained and arranged. There are perfectly landscaped lawns, greenery, flowers and much other. The yard also comprises a covered garage, 18 sq m in size. The property is suitable for all year around living. Water and electricity is provided, also telephone lines. Perfect conditions and all amenities. 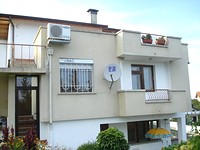 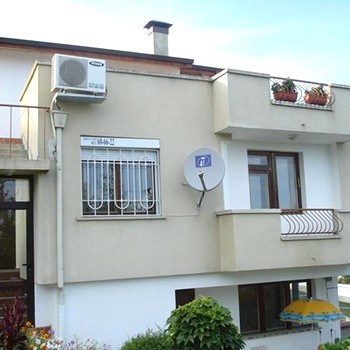 Luxury apartment for sale in St St Constantine and Elena

Luxurious apartment with beautiful sea view, in a complex with controlled access and swimming pool, meters from the seashore. According to the project and the title deed, the apartment was finished as a two-bedroom but has been transformed into a spacious one bedroom. After the changes, it has the following distribution: a living room with kitchen and dining area (60 sq m), one bedroom (20 sq m), bathroom with toilet (8 sq m), wardrobe (5 sq m), corridor, winter garden and two panoramic terraces. The apartment has a parking space in an underground garage and also a cellar! Each room has access to a terrace with sea view. The terrace includes a barbecue and sun loungers. Only high quality materials were used - the flooring is oak parquet, the corridor and the bathroom have Spanish Mediterranean terracotta and the interior doors are made of solid oak. The furniture is custom made - a combination of wood and genuine leather. There are beautiful wallpapers and lighting fixtures, which give the final touch to this unique apartment. The apartment is air conditioned by a DAIKIN split system. 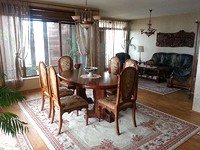 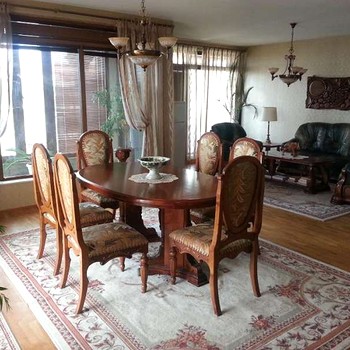 New Glass Factory To Open Near Razgrad 05/01/2009
Chinese holding Loyal Glass Group has announced plans to open a glass production factory near Razgrad, Dnevnik daily reported, citing the Bulgarian news agency BTA. The factory will be entirely designed and built in 20 months by another Chinese company, whose name was not released.The project...
Bulgaria's December Jobless Rate Down By 2.21% 19/03/2008
Unemployment in Bulgaria stood at 6.91% in December, down by 2.21% from a year earlier, but up from November, the national employment agency said. The jobless rate marks a slight increase of 0.29% over the previous month, which is traditional for the end of the year. The total number of...
Bulgarian property ::  Недвижимость в Болгарии ::  Proprieta in Bulgaria ::   :: Towns in Bulgaria :: Property renovations :: Services and Fees :: Bulgaria Property FAQ :: Map Search :: About Bulgaria :: Mortgages :: Property insurance :: Testimonials :: Contacts :: Disclaimer :: Mountain properties :: Golf properties :: Lake properties :: Rural properties :: Properties in Beach Resort :: Properties in Ski Resort :: Properties spa Resort :: Apartments in Bulgaria :: Land in Bulgaria :: Houses in Bulgaria :: Bulgaria property investment ::
© Best Bulgarian Properties Ltd. - All rights reserved
Excellent Choice For Investment On The Seaside