A small apartment building, 4 floors plus one penthouse and one basement floor, located in the famous resort of St. Vlas, Bulgaria. It stands just 350 meters from the beach and connects to the main road to Sunny Beach just around the corner. The property consists of 8 one-bedroom apartment units (2 types) and an underground premise with total built up area of 510 sq. m. The building is looking to the beautiful Bay of Nessebar with its SW side and to the mountain with its NE face, and has a small yard. The building was completed in 2006 and is fully fitted with everything except furniture. The units are offered air conditioned and heating is provided through local boilers in each unit. St. Vlas is located just 4 km from Sunny Beach, 8 km from the ancient Nessebar and offers the same quality beaches, without the negatives of overconstruction and excessive crowds. The resort also features mineral springs. Anyway, nightlife, shopping and restaurants at Sunny Beach are just five minutes away by car. Due to its location and features, prices in St. Vlas are similar to those in Sunny Beach and in summer the resort is full. The building with the land is offered as a WHOLESALE BUY!

Apartments for sale in Saint Vlas

This is a VIP apartment complex built in the village of St. Vlas on Bulgarian Black Sea coast right next to the 5-star hotels of Sunny Beach. The complex comprises 25 000 sq m total living area and is built on the sea-shore on area of 15 000 sq m. The site conforms to all quality european building standards - the quality of 5-star complex. All of the materials are high quality. All of the units at Casa Real will have sea views. Among the amenities on the complex property are a luxury restaurant, coffee bar with sea view, two pools - binded with a waterfall, a pool side bar and a baby pool. Facilities: In a fabulous 2-storeyed restaurant one can delight in amazing sea- and ancient city Nesebar view and taste the cuisine of famous Chef invited for your relish Swimming pool Bar Beach Bar Olympic swimming pool Reception Internet Currency Exchange Pharmacy Shop Room service Safe Deposit Boxes rent 24-hour safeguarding   St. Vlas is noted for high dynamic of infrastructure development: today the infrastructure is comprised by numerous restaurants, nightclubs, yacht clubs, spas and recreational complexes. The development is situated in a bay in the south of St. Vlas and designed in Spanish style. Scheduled opening: June 2008 There will be 12 4-storeyed buildings, a large 1000 sq m fashioned swimming pool and a fabulous 2-storeyed restaurant on the seashore 150 spacious swell apartments with total area of 71 - 500 sq m and 6 formidable penthouses with a minimum area of 390 sq m for a 3-bedroom type All apartments have several bedrooms, vast halls, commodious bathrooms (12 sq m is a minimum area) and huge terraces Lining materials, doors, wooden windows and bathroom fixtures are all of highest European quality Highest Italian marble grades are used as facing materials for the whole complex area The equipment with ultramodern elevators is another considerable advantage for a 4-storeyed complex High Israeli technologies and materials are employed for territory landscape gardening St. Vlas Bay seawater temperature is always 4°C higher than the average Conifer forest just behind the complex prevents mosquitoes   Maintenance fee per apartment is only € 500 a year. Payment: 100 %. 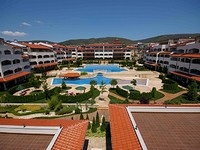 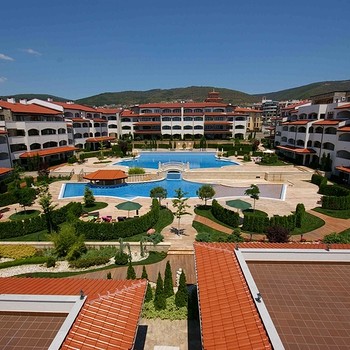 The plot is located in Sunny Beach-the largest tourist resort on the South Black Sea Coast. The white sands of Sunny Beach are spacious, 8 km long and from30 to60 m.wide. The land offered is fully regulated, ready for construction (with an idea project for a holiday complex that may be used), located on the front line of the main road Bourgas -Varna, after the crossroad leading to Sunny Beach and the ancient town of Nessebar. The plot is located opposite to an artificial lake with plans underway for utilizing as a water sports center, situatedon the beach side of the road. Coefficients for construction: Area of the plot 12 005 sq m., KINT 1.90, Height 15m, Density 40%,Green land 50%,TBA 25 000sq.m., Statute-for Residential and Commercial construction. The coefficients of the plot allow a 30% larger construction than any other plot in the neighbourhood. Face of the plot to the main road Bourgas -Varna is137 m, distance from the land to the shore line-1 000 m, distance from the plot to the airport of Bourgas30 km. The market evaluations of the plots in this region in the current situation range from50 to100 euro/ sqm., but none with such high coefficients. The regional plan is for hotel, commercial and residential construction. There are already hotels and a MALL under construction as well as warehouses and business centers. The location of the land on the 1stline of the main road Bourgas -Varna provides an excellent opportunity for development with unparalleled access. The price does not include VAT. 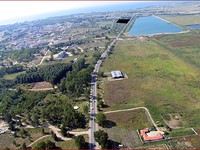 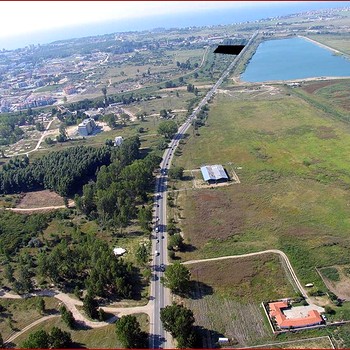 Restaurant for sale in Sunny Beach

Have a look at our next interesting suggestion! This is a restaurant for sale located in a closed type complex, in the most famous Bulgarian sea side resort of Sunny Beach. The restaurant is located on the territory of the complex which is 6000 sq m large. The restaurant is four storeys. The first floor is an under ground one and has total area of 145.76 sq m. The floor can be used as an amusement facility. Put a pool table there or something like this. The first floor is 126 sq m large and this is the actual restaurant part. It can fit up to 80 seats. It is fully furnished and equipped, ready to meet clients. The second floor is 148.80 sq m large and contains rooms for the staff. There are two apartments there with 6 facilities in total. The last, third floor is a summer terrace. It is also 148.80 sq m large. The restaurant with all of the facilities is for sale fully equipped with everything necessary. The building has very interesting and stylish design. It is finished in Mediterranean style. For the decoration on the outside, has been used real stone. The restaurant is situated between two apartment complexes with total of 190 apartments. The restaurant also has access from the outside alley and it borders two large open air swimming pools. The complex itself is located in close proximity to the center of the resort and all main roads. All communications and necessary amenities are near by. 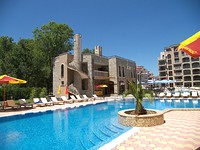 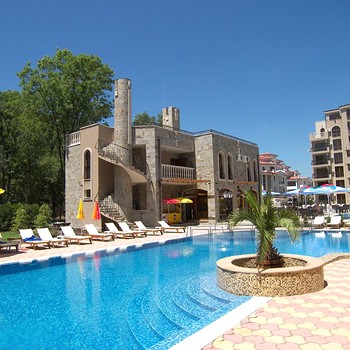