6500 square metres of land in a beautiful village, in the Balchik region of the Black sea coast. The land is east of the village and has breathtaking views of open countryside as well as being able to see the whole of the village itself. Only 6 km from the coast and seaside resort of Albena. Golden sands, Balchik town and the airport are all just a few kilometres away. The land is close to all amenities including electric, water and road. The area enjoys hunting and fishing amongst its many activities. There are 3 international golf courses only a few kilometres from the land with 3 more planned to be developed with villages very soon. Many new developments are being built in the area with more to come. The area is predominantly known as the ‘villa zone’ and has a very up-market feel about it. The land is not regulated for the time being but its status can be change This truly is an exciting investment and business opportunity to anyone interested.

Villa for sale in Balchik

Have a look at this advantageous offer! It is a cozy villa located in one of the most popular places at our seaside- Balchik . It is 46 km away from the city of Varna and the International Airport , 20 km from the popular resort of Albena and 29 km from Golden sands . The house that we present has total living area of 124 sq m distributed between two floors and attic. The first floor contains a living room, kitchen and bathroom with WC. There are two staircases leading to the second storey-inside and outside one. It consists of 2 bedrooms, bathroom with WC and a panoramic terrace with gorgeous view toward the villa zone and Balchik. The house is in a very good condition. It is fully finished with terracotta flooring in the kitchen, living room and bathrooms, and wooden flooring in the bedrooms; PVC windows and fully fitted bathrooms. There is electricity, water and an alarm system, too. The access to the property is fast and easy during the whole year. The plot of land that is going with the villa has size of 510 sq m . The garden is very well maintained. There is a garage with size of 15 sq m and a barbeque area in the yard. The picturesque resort of Balchik has been known for a long time as the White Town for the mainly white colour of its lime rocks. The place is extremely beautiful and full of history. Balchik is very famous and lots of foreign buyers decide to invest there. Do not hesitate to be the next investor in this fantastic place. Take advantage of this great suggestion! 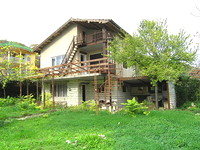 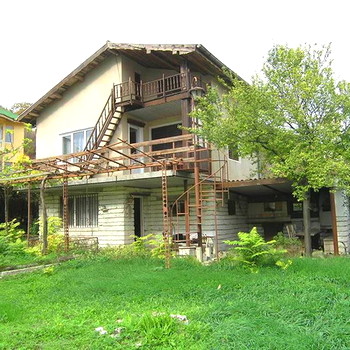 Apartment for sale close to Balchik

The apartment consists of one bedroom, a kitchen box with dining area, living room and a terrace. There is also a bathroom with a bathtub and underfloor heating and a separate laundry room! The apartment is on the second floor, fully furnished. It is equipped with marble fireplace, individual air-conditioning system for cooling / heating, electric hot water boiler. The kitchen is fully fitted with lower and upper cabinets. It has a built-in refrigerator, extractor hood, ceramic hob, steel sink. The doors and windows are double-glazed with PVC German profiles The complex offers several pools with bars, playgrounds and leisure facilities. There is a beautiful landscaped garden with over 90 different types of flowers, plants, shrubs, deciduous and coniferous trees. The complex also includes: 24-hour reception, two large open air swimming pools with children's sections, as well as three smaller open air pools with sun loungers, tents and umbrellas, a wet bar, two restaurants, a conference hall, a gym, a health-rehabilitation center, a grocery store, children's area, security, etc. The property is located about 16 km east from Balchik 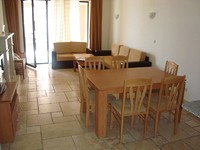 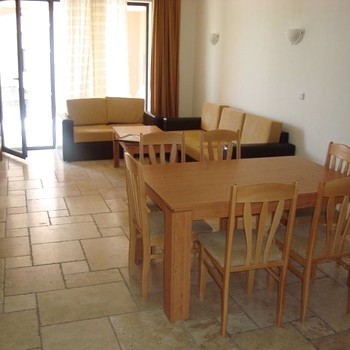 Apartment for sale in Balchik

Large apartment with a total living area of 150 sq m in Balchik. The apartment has two large bedrooms (35 sq m with sea view and 18 sq m), a large living room (50 sq m with sea view), a kitchen and dining room, a bathroom and two large balconies with magnificent sea and mountain views. The apartment is luxury finished. The building is new, with security system, fenced yard, a gazebo, barbecue, swimming pool, private parking, high speed internet. The property is situated 600 m from the sea. It is near the Botanical Garden and the historic palace of the Romanian Queen Regina Maria, which is one of the most visited tourist sites in Bulgaria. Varna and the International airport are at 30 km. The distance to the resort Albena is 4 km, 5 km to the medical and health center Tuzla. There is fish market nearby. 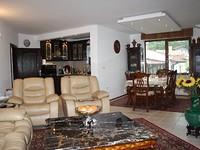 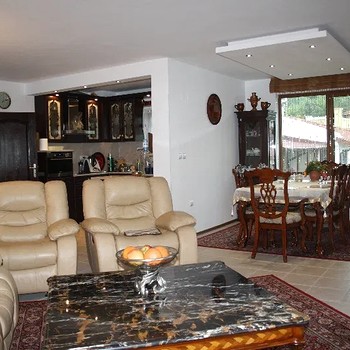