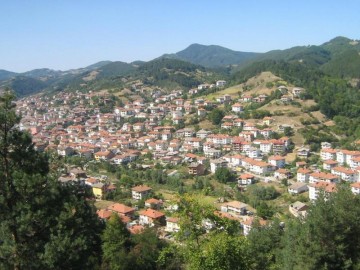 Zlatograd municipality is located in southern Bulgaria, at the end of the Eastern Rhodopes to the last Rhodope ridge after which starts the  Aegean plane. Zlatograd is nestled in the valley of the river Belitsa. Located about 300 km from the capital - Sofia, about 70 km from the ski resort of Pamporovo and 60 km southeast of Smolyan. The most southern town is situated just 2 km from the Bulgarian -Greek border and 50 km from the Aegean Sea.
Nearby is planned to build international corridors (Zlatograd - Thermes - Xanthi and Makaza). This is the shortest and easiest route "an hour away" from the beautiful Greek island of Thassos. On the east Zlatograd municipality borders the municipalities Kirkovo and Jebel north with the municipality Nedelino and to the west with the municipalities of Rudozem and Madan. Its southern urban boundary coincides border with the Republic of Bulgaria with Greece.
Administratively, the municipality is in the Smolyan region and geographical center of the municipalities in southern Bulgaria. The administrative center is the town of Zlatograd, uniting around eight settlements - Startsevo, Dolen, Erma river, Alamovtsi, Tsatsarovtsi, Strashimir, Presoka and Kushla. 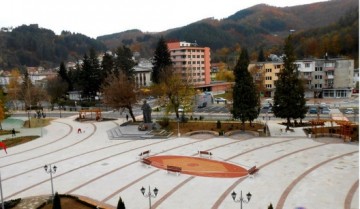 Zlatograd municipality covers an area of 175.8 km2, which is 5.4% of that of Smolyan region and 0.2 % of that of the country. The altitude varies from 385 to 1118 m. The town Zlatograd is the lowest place located in the municipality - 420-550 m terrain is mountainous in places changed dramatically - alternating steep slopes and small valleys extended and developed hydrographic network. This explains the fragmentation of agricultural land. Their average slope is 10 ° -12 °.
Zlatograd can be reached only by road (there is a choice of route). One route is from the town in Bachkovski Monastery, Narechenski bani, Chepelare, Smolyan and Madan (about 140 km from the town). Zlatograd can be reached from Kardzhali (60 km) through Jebel and Benkovski.
The municipality is far from major airports in the country (Sofia, Plovdiv, Varna, Burgas) and most developed vacation destinations for foreigners (Black Sea coast, Sofia, Borovets, Bansko). The proximity to Pamporovo, creates the potential for generating foreign flows.
Geographical coordinates of the municipality are: 41 ° 23 ' north latitude, 25 ° 6' east longitude and estimated an approximate altitude of 522 meters. 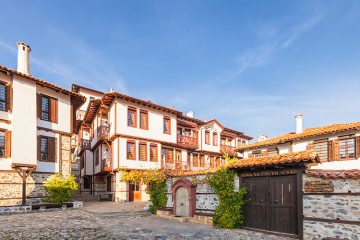 Centuries ago, it was called Altankasaba, which means Golden City in turkish. Whether coincidence or not, but in 1934 the city really was renamed to Zlatograd Golden city in Bulgarian). Here are born great patriots, such as Delio Voivoda and Anton Strashimirov. Millenary history teaches people in this region to protect and preserve their historical memory and traditions. Numerous traces left from the time of the Thracians make them feel proud and free, strong and confident, happy and rich because of the land on which they walk. Zlatograd people long knew that time is only a concept. And the truth is in preserving the legacy and creations for posterity.
Zlatograd people are very proud of their eco-routes and for good reason. Well trained guides will not only guide you on the marked trails, but will also teach about the plants and animals will tell old legends. Four paths lead to four points which connected by an imaginary line, form a cross over the city - to keep and protect. This area is called Krastata gora (Cross- forest). It`s been known since ancient times, and on their four tops there were sanctuaries.
The region has many birds, amphibians and reptiles that are tipical for central and high mountain areas and the plants are more than 200 species. 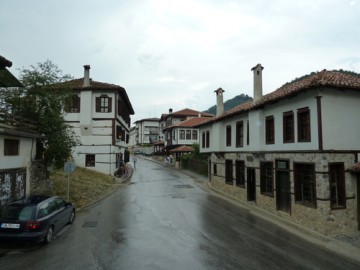 In the middle of Rhodope Mountains, 10 miles from Zlatograd, after Startsevo there is an ostrich farm. The ostrich is a smart and sensitive animal. Creates family difficult, but once they do, it is forever. With good luck, may be caught in the right moment when the male courting the female. It is a spectacular view.
A little bit further than the ostrich farm is located the area Belite kamani (The white stones). Only birds can see that the peak of bright limestone is located in the center of a perfect circle of hills. Archaeologists say that the cracks in the rocks Thracians placed coins, pottery, wheat, millet, and then smearing them with clay. Most likely these were sacrifices to the gods, and Belite kamani is one of the largest ancient shrines in the Rhodopes and the main shrine of the God Sun. It has been going for 1000 years - from the V century BC to the fourth century AD probably after the declaration of Christianity as official religion it was abandoned. From this divine place coincidentally chosen by the ancient Thracians, reveals the splendor of almost all the Eastern Rhodopes - a sea of mountain ranges, valleys, picturesque villages and towns. 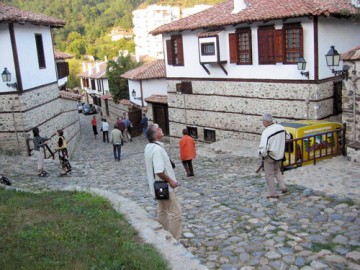 Zlatograd ethno cultural area has been inhabited for millennia. The city itself has a history. For the ancient inception and historical development speak the numerous archaeological sites and cultural monuments, surrounded by the romantic spell of folk tales and traditions. Until today have been preserved over a hundred cultural monuments. From the Renaissance period was preserved and restored the largest compact architectural reserve in the Rhodopes. Traditional houses are impressive not only for their white and round chimneys, but with the peculiar combination of architectural elements.
In the traditional culture of the area is reflected the Zlatograd rich spirit of its founders, particularly stands out folklore - in all its diversity.
Ethnographic complex - Zlatograd is unique with the dynamic display of the museum exhibition- a demonstration of traditional labor skills to implement innovative approach to exposure of handicraft workshops, with its location in the midst neighborhood of architectural monuments inhabited all year-round. 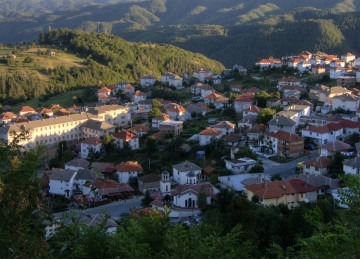 The ethnographic complex is located in one of the neighborhoods of Zlatograd, formerly known as "The Old Town" - located on the south bank of the river Varbitsa. Over a hundred buildings, mainly residential survived until today. Zlatograd residential building is unique. It includes elements of the Revival and the nearby Aegean coast architecture. Zlatograd houses were built of stone, mud and wood, mostly on three floors. The mud parts are whitewashed with white lime, hence one of the names of the city during the middle ages - Belovidovo.
Zlatograd is one of the 100 national tourist sites. Architectural reserve, which unlike Etara near Gabrovo, is not artificial and is alive - it is still inhabited. In the complex can be seen museum expositions, 6 traditional craft workshops, mills and etc. The buildings in the reserve feature white chimneys and white walls around the yards, open cot, wide oak doors.
Zlatograd is a town with a rich culture and history. On its territory is the oldest church in the Rhodopes - "Uspenie Bogorodichno" - built in 1834.
Because of the high biodiversity, unique natural attractions and unspoiled nature, untouched by the negative impacts of industrialization and urbanization eco- tourism became one of the development priorities of the municipality.