The town of Vratsa has 69 423 inhabitants and is 380 m above sea level. It is situated along the two banks of Leva River, in the northern foots of the majestic Vrachanski Balkan. It is 116 km north of Sofia, 41 km south-east of Montana, 80 km and 74 km south of Kozlodoui and Oryahovo, respectively, 57 km and 17 km north-west of Botevgrad and Mezdra, respectively. Vratsa is the largest town in Northwestern Bulgaria. Its nature, history and culture form a unique combination. It is a regional administrative centre. 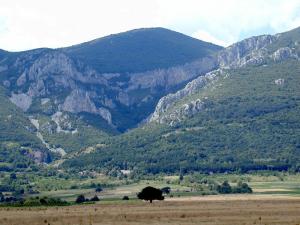 South of the town is the fantastic gorge of Leva River, coming out of the Vrachanska Mountain, which is known since a lot of time ago as Vratsata. In the 6th century there was a fortress here according to the Byzantine chronicler Prokopii. Later the medieval Bulgarian settlement Vratitsa emerged in this area. In the beginning of the Ottiman invasion Radan Voivoda successfully defended the area for quite a long time, taking advantage of the natural fortifications and the strong walls of the existing fortress. During the Turkish rule Vratsa was turned into a garrison settlement and was many times ruined and recovered. At first, the Wallachian ruler Mihai Vityaz ruined the town is 1596, while later on (in the beginning of 19th century), during the rule of Osman Paz-vant-oo-glu the town served as a battlefield for the troops of the Vidin feudal and the Sultan. At the end of the 18th and particularly during the 19th century Vratsa grew into a big craftsmanship, trade and administrative centre. Its products - aba manufacturing (a coarse homespun woollen cloth and upper men?s garment made of it), leather products and goldsmith - reached Lyon, Vienna, Bucharest and Tsarigrad. At mid-19th century the town already had 2500 houses.

All these influenced the spirit of the town. Ccathedrals, schools and beautiful houses were built at that time. Sofronii Vrachanski worked and lived in the town. Other natives of Vratsa are the prominent Bulgarians Ivan Zambin, the first Bulgarian diplomat in Russia, Dimitur Hadzhitoshev, famous political leader killed by the Turks in 1827, etc. The town was liberated from the Turkish Rule on 9th November 1877.

With the decline of the crafts after the Liberation Vratsa lost its significance. After the construction of Sofia - Mezdra - Varna railway line, the towns of Mezdra and Roman took off some of the town?s trade and market functions. Later on, when the railway line Mezdra - Vratsa - Lom was completed (1913) and a continuation of the railway from Broussartsi to Vidin was finished (1923) Vratsa partially regained its position. 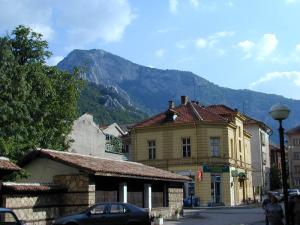 The Town Museum of History is famous for its extremely valuable golden Thracian treasuries, its original samples of the well-known Vratsa goldsmith school and numerous exhibits and a lot of information about the life and last days of the poet and revolutionary Hristo Botev. There is an impressive monument of the poet in the central town square named after him. Immediately behind is the restored residential and defence turret of the Kurtpashovs?. 150 metres north-west is located the other turret, constructed at the same time and to serve the same purpose, namely the turret of the Mezhchiis?.

The Revival-Ethnographic Complex includes the Hadzhitoshevs? House (the most valuable and interesting), the house of Grigoriya Naidenov - a member of the local revolutionary committee and a volunteer, the house of Ivan Zambin, The Ascension Church dating back to 18th century, which gave shelter to Levski, P. R. Slaveikov and other revolutionaries and enlighteners. Also here is the oldest school in the town - The Ascension School (1822). There is a bust-monument of Vassil Levski in front of the complex. The Nikola Voivodov Complex (also in the centre of the town) includes the native house of Voivodov and the house-museum of the typical Vratsa urban traditions and style from the very beginning of the 20th century. Also here is the house of Gen. Kiril Botev, (Ivanka Boteva Str.), where the brother of Hristo Botev together with their mother lived from 1900 to 1903. The native house of Prof. Andrei Nikolov (Andrei Nikolov? Str, below the Tourist House) - the patriarch of the Bulgarian sculpture, houses a permanent exhibition of his masterpieces. The beautiful Hristo Botev Tourist House, situated on the Kaleto Hill was built in the period 1926-1931 with the donations from the tourists of Vratsa. Steep stone stairs lead to the house and there is a round-routing asphalt road. In the proximity with the Tourist House is the monument of ?The Herald of Liberty?. It at this place that one can hear each Sunday the sounds of a battle horn reproducing the signal of the Russian soldier, Petlak the Cossack, who had thus announced the liberation of the town on 9th November 1877. At about 100 metres behind the monument there is a high white-stone obelisk bearing the names of the volunteers from the region of Vratsa who took part in the war. The southern part of the town, where the Leva River leaves the Vratsata Gorge, houses the old craftsmanship area ? the Kemera Quarter. All the old shops and stores are currently under restoration. Some of them are already refurbished and may be visited. The Town Art gallery has a rich collection of the works of famous artists and sculptors, among which one can spot the names of Andrei Nikolov, St. Ivanov, Tseno Todorov, Ivan Funev, Pencho Georgiev, etc. 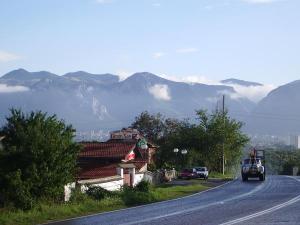 Hristo Botev National Park in the area of Okolchitsa (located about 20 kilometres south-east of the town, in the very heart of Vrachanski Balkan). In the beginning of June 1876 this place witnessed the last drama that put an end to the heroic epic of the detachment of Hristo Botev. The detachments?s voivoda (leader), as well as the majority of his men, were killed and the rest of them were either caught or scattered in the Balkan. The heart of one of the greatest and most ingenious Bulgarians, who left to the generations the example of his heroic life, his unsurpassed political journalism and some 20 poems, which are a majestic peak in Bulgarian poetry, ceased beating. And he was just 28 years old... In 1937-1938 a 35-metre monument with a volunteer?s crest was erected at Mt. Okolchitsa (it can be seen from a long distance far away in the plain and the mountain) to honour the heroism of Botev and his detachment forever. In the valley of Yolkovitsa, on a natural crag the place of death of the poet and revolutionary is marked. At a distance of 300 metres away from this natural monument is located the Okolchitsa Chalet (a complex of 5 panel bungalows with a restaurant, 84 beds in rooms of 2, 3, 4, 5, and 6 beds, one can make a reservation in the Tourist House in Vratsa). Each year on 2nd June the area hosts national celebrations in honour of Botev and all those who fought and gave their lives for Bulgarian freedom. All participants in the national tourist march along the Botev?s trail from the Kozlodoui bank on the Danube River arrive on the day before the celebrations and a large campus town is erected. Besides the Botev?s trail, this is the final destination of many other marked hiking tracks. During the summer there is a regular bus transport from Vratsa, and for the rest of the year - regular bus transport is provided to the village of Chelopek, and there are 8 kilometres more to the area. For about 3-4 hours one can reach the place along a marked hiking track starting from the town and passing close to the interesting waterfall of Skaklya. 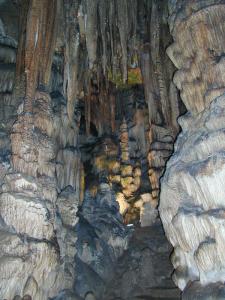 The Ledenika Cave is also situated in the Vrachanski Balkan, south-west of the town (16 km asphalt road and approximately 2.30 hours on foot along a marked tourist track). This is one of the most interesting Bulgarian caves, which is electrified. There are several halls with wonderful formations, the most impressive being the Concert hall (60 m long, 46 m wide and 22.7 m high) which has a fantastic acoustics. It has hosted a lot of concerts. The entry fee is just a symbolic one. Next to the cave there is a tourist settlement. Ledenika Chalet is nearby, too. In the direction to the settlement there is also an open-chair lift, its initial station being between the town of Vratsa and the village of Zgorigrad, which is located immediately to the south end of Vratsata Gorge. There is regular bus transport to the lift.

Vratsata - the fantastic gorge of the Leva River, immediately to the south of the town. Its western rocky massif, full of miraculous cliffs, some of them reaching 350 metres height is extremely impressive. The whole region is karst (as well as the entire Vrachanska Mountain) and is a paradise for the rock climbers. There are dozens of different categories of climbing routes. The area hosts a large and nice Alpine House and there are a lot of nice meadows scattered along the river, suitable for camping. Vratsata attracts thousands of admirers of nature both from Bulgaria and abroad. From the centre of the town the place can be reached within half an hour on foot. Another possibility to go there is to use the bus transport to the village of Zgorigrad, located on the other side of the gorge. The Botev Alley, 120 km long, from Kozlodoui to Okolchitsa, reproduces exactly the route of Botev?s detachment with all the historic sights along the trail. The closest of these historic landmarks are the Botev meadow on the Veslets Hill, where the detachment had to overnight, and Milin Kamuk, where the detachment fought a severe all day long battle on 30th May and gave 15 victims, among which the colour-bearer - Nikola Simov (Kourouto). There are monuments erected on both places. One can reach these spots on foot or using the regular bus transport to the village of Kostelevo (for Botev meadow) and to the villages of Mramoren and Banitsa (for Milin Kamuk). Vratsa is an important and frequently used departure point for hiking tracks round the beautiful and glorious Vrachanski Balkan, which is part of Western Stara Planina Mountain.