Spa resort - Velingrad, the spa capital of the Balkans

Velingrad is one of the most popular towns and balneological resorts. It lies at the western end of Chepino Valley, part of the Rhodope Mountains in Southern Bulgaria.

According to legend, Orpheus lived in these lands at one time. There also is a saga that these lands inspired Spartacus the Thracian and gave him a titan power.

Later, the region was massively inhabited by the Slavs. According to the Bulgarian professors, the tribe Dragovichi lived there. They accepted many Thracian customs, but gave them typical Slavic characters. Soon after the Bulgar invasion on the Balkans, the whole region was annexed to the First Bulgarian Empire by tsar Malamir.

At the times of the Turkish terror, the Turks converted many of the Slavs in this region to Islam, by killing those who did not want to accept their religion. However, in the Communist regime in Bulgaria many of the Bulgarian Muslims returned to Orthodox Christianity, their old religion. 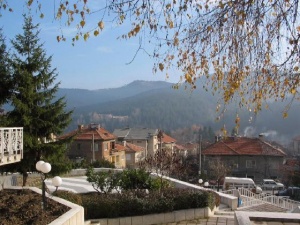 Velingrad is situated at 750-850 m above sea level. Summers are warm and winters are mild. The average annual temperature is 10°C, while the average July temperature is 19°C. The annual duration of sunshine is about 2,000 hours. The relative air humidity ranges from 65 to 75%. Surrounded by age-old pine tree woods, the town favors abundant sunshine. This exclusively rare and valuable combination has a beneficial influence on the process of ionization (negative ions are prevailing) and is of definite therapeutic importance.

There are 70 sources of mineral water with curative and preventive properties in and around the town. The mineral waters (from springs and wells) vary considerably in temperature, mineralization, radon, silicic acid and fluorine content, and are suitable for treatment of a wide range of diseases. 9000 litres of water per minute spring from the five thermal and mineral deposits in Ladzhene, Kamenitsa, Chepino, Rakitovo and Kostandovo.

Together with the numerous mineral waters, Velingrad boasts another natural phenomenon as well — the Kleptuza, the biggest Karst spring in Bulgaria, with an average discharge of 1200 litres of ice-cold water per second.