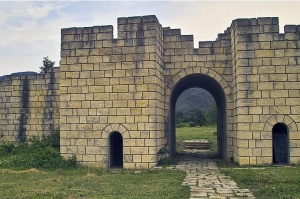 As a second capital of Danubian Bulgaria it is full of artifacts and monuments. Ruins of the former settlement can be found 2 km south of the present day town. Veliki Preslav was the capital of the Bulgarian kingdom from 893 till 969 in its flourishing era and in the boom of Old Bulgarian culture - the so called Golden Age. During Khan Omourtag in 9th century it was mainly a military camp with a fortified palace and garrison. Tsar Simeon proclaimed it the new capital a successor of Pliska. It established as an administrative, cult-religious, and cultural centre of the medieval Bulgarian state, renowned for its remarkable monumental construction work, the achievements of applied arts, the stone plastic arts, the painted ceramics, the famous literary school.

Veliki Preslav grew systematically as a town. Following the example of Pliska , the town had the same construction of gates, towers and walls. It had the same two stone wall rings separating the inner from the outer City. Furthermore the outer zone was guarded by a solid and high fortress wall This was the first in Europe town with two concentric fortress walls - the exterior being 3.25 m thick, and the interior (the citadel) - 2.80 to 3 m thick.

Preslav is a pure Bulgarian name coming from “preslaven” (famous, most glorious), and the name Veliki was added when the capital turned into a really huge and emblematic town for its time. The old Bulgarian capital occupied a territory of 3.5 sq. km. During the years the town was built on and improved .Some of the most talented Bulgarian writers and philosophers of the time worked and lived there - Yoan Ekzarh, Chernorizets Hrabar, Konstantin Preslavski, Presvyter Kozma, Tudor Doksov. In 969 Veliki Preslav was conquered by Prince Svetoslav of Kiev, and between 971 and 1186 it was under the Byzantine rule. It was known as Johnanopolis. In 13th-14th centuries it was a significant administrative centre, main bishop’s residence. In 1388 the town was conquered and destroyed by the Turks. Some Turkish documents mention a village named Eski Stambolchouk (Old Istanbul) bearing the memory of the old capital. The village had this name till 1878, and then it was called Preslav. In 1993 the town returned to its name from its most significant period - Veliki Preslav.

There have been preserved remains of fortress walls, palaces, civil ensembles, workshops, public baths, water pipe systems. The most remarkable building in Veliki Preslav is the Round (Golden) Church built in 908. Its dome (gold-plated outside and inlaid on gold inside) covers the central building with 12 niches (cut in the wall) and 12 white marble columns erected in between them. In respect of plan and rich mosaic and sculptural decoration, the Golden Church is a unique example of the old Bulgarian architecture. It was a predecessor of the European Baroque with several centuries ahead of its time.

• The Ethnographic House is a great place to visit to get a feel of the Bulgarian customs in the past. Visitors can listen to authentic folklore, and taste the traditional “durpana banitsa” (specially made sheeted pastry) and the wonderful wines of Preslav.
• The St. St. Peter and Pavel Church was declared a monument of culture. 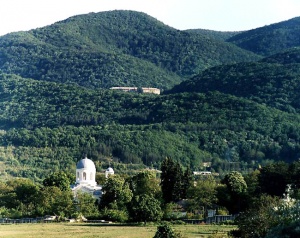 • Tsar Simeon and the Bookmen Sculpture Composition.
• A monument in memory of the people of Preslav killed in 1912-1918 wars.

Veliki Preslav is exporting wines and cognacs of high quality to England, Belgium, the Netherlands, USA, Canada and Russia.
Transport & Surrounding Areas
Transport: The town has regular bus and railway transportation.You can catch a bus to the big cities in the area like Shoumen, Turgovishte, Vurbitsa, Smyadovo, and other smaller villages in the region. The bus station is in the central part of the town.
The railway station is located in the eastern industrial zone and is one of the big national railway stops.
Surrounding areas: Intresting sight to visit just one and a half kilometres south-east of the town, is a monastery dating back to 10th century (St. Pantheleimon). Apart from being a major spot of cultural life, Patleina is famous for its unique medieval ceramics. This is the place where the ceramic icon of St. Teodor Stratilat was found - one of the most significant samples of our cultural heritage. This is also the place where Tsar Boris I spent the last years of his life after departing the throne.

The Ticha Dam - 14 km south of the town – is a lovely place to have a picnic,to go fishing or to just sit back and relax.

The town of Vurbitsa - 37 km south-west of Veliki Preslav and south of Vurbitsa Pass in the Balkan Mountain Range – is another historical Bulgarian town. You can see a lot of preserver building in the typical revival architecture – the house of Hadgi Vulchan , old workshops, the school of 1873, the house of the Grouev brothers and many others.