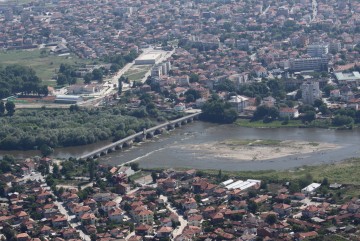 Svilengrad municipality is located in the southeastern part of Haskovo Municipality. In the northeast part are the slopes of the Sakar Mountain, southwest- Eastern Rhodopes and it includes parts of the Upper Thracian Plain.
The municipality has unique facts to limit Bulgaria with two neighboring countries, Turkey and Greece. This determines its leading role in the future development of European transport corridors linking Western and Central Europe, the Middle and Far East. Svilengrad has a strategic location - located on the border of Turkey and Greece along the transport corridor № 4 in the direction of Istanbul and close to other major transportation arteries. Svilengrad history dates back to the IV millennium BC - when his lands were settled Thracian tribe Odrysaeans. In Roman times there was a road going along the left side of Maritsa River. There are written records that prove Bulgarian origin of this community before and after the reign of King Simeon.
Agricultural production in the municipality is mainly aimed at the cultivation of tobacco, vines, grasses and fruit trees. Conditions in the area are suitable for cotton production. Agriculture is the leading economic role in the region.
The total area of Svilengrad 70 537.10 ha. The population was 25,792 people, of which 19,960 are Svilengrad. The municipality includes a community center and 23 villages. Across its territory pass part of the transport axes of the international road E-80 and the extension of E-85 to the Republic of Greece. Railway line Sofia-Plovdiv-Svilengrad-Istanbul linking the Republic of Bulgaria and the Municipality of Svilengrad European railway network is categorized as a major highway line suitable for combined transport.
Development of cross-border cooperation is essential for the municipality. Granted to its unique borders with Turkey and Greece, holds great potential for two specific - and trilateral projects in the field of economy, culture, business, environment, and ecology. Cross-border initiatives with significant potential for economic prosperity Svilengrad. 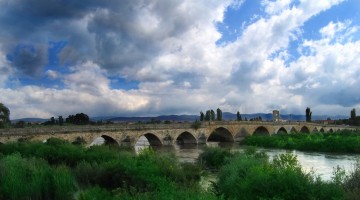 The Bridge on the River Maritsa
The bridge is the only fully preserved element of the overall complex of former caravanserai, mosque, bazaar and hamam.
It was built by order of Mustafa Pasha, a vizier of Sultan Suleiman I the Magnificent /Suleiman El Kanuni/. Year of construction in 1529 was transmitted to the numeric values ​​of the Arabic letters in the last two words of the inscription on the bridge: Hassan Abadie, ie eternal good deed. Thus, together with the construction of the bridge, Mustafa Pasha is recognized as the founder of the new settlement called Svilengrad which was called in Turkish- Mustafa Pasha kyopryusyu, ie "Bridge of Mustafa Pasha". Its length is 259 m, width 6 m paved with smooth stones, and in past times it had 20 beautiful arches. Railings are made of whole stones. The number of all of the bridge parapet blocks is 706, 353 on both sides. The caption for the construction of the bridge is embossed on a marble plaque affixed to rise in the middle of the bridge railing, 6 m high. The plaque is called by the locals – tarih, tareh, i.e. history. The translation of the inscription reads: "This Bridge was built when he was caliph- the greatest of the Sultans Sultan Suleyman Khan, son of Sultan Selim Khan to be the length of his safety and security; their Vizier Mustafa Pasha - God rest his patronage for what he creates. And it /the bridge/ was his longest lasting good deed during the year of the date on which it became an eternal good deed". 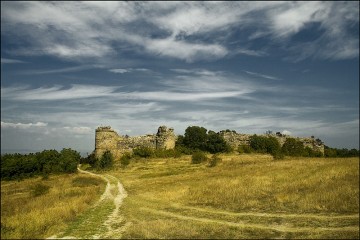 Medieval fortress near Mezek
West over the village Mezek, rise the ruins of one of the best preserved medieval castles in our land. The walls enclose an area of ​​about 6.5 acres in the shape of an irregular rectangle with size 110/60 m built of stone bonded with plaster. Outside are streaky two four-belt of bricks. Defense of the fortress was reinforced by nine towers, five of which are located on the south wall - the most vulnerable.
The construction of the fort should be referred to the end of the XI and XII century early, probably during the reign of Aleskey I Komnenos. Fort was used until the fall of the region under Ottoman rule. The fortress had the functions of a castle or was intended for permanent residence of the garrison and its commanders. The castle was destroyed significantly around 1900 when the walls of stones were taken to build the Turkish barracks in Svilengrad. 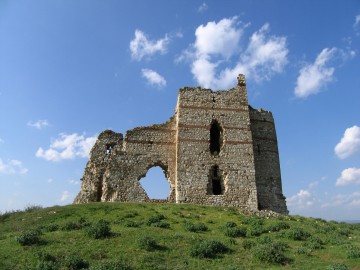 Fortress Bukelon
Matochina village is situated next to the Bulgarian-Turkish border on the right bank of the river Tundzha. At the northern part rises a steep hill only accessible from the side of the village. There was a partition wall of which now only traces remain. 50 meters away from it, up the hill, was the beginning of Bukelon fortress - the closest guard of Odrin from the north. It is one of the best preserved military buildings in the country.
The fortress, which encircles the hilltop is about 65 meters wide and 150 meters long. It is best preserved defensive tower at the entrance and part of the double city wall by the door. Tower and the walls were built of stones and belts of 4 rows of bricks cemented with white mortar. It was built on three large floors. The top floor with semi-cylindrical shape served as a chapel in which the congregation beleaguered defenders of the fortress. Battlements are located on all sides, and they were reached by wooden stairs.
The fortress was built during the Roman era. Here by Bukelon in 387 was held a big battle between the troops of Emperor Valent and the Goths. It ends with the complete defeat of the Roman army, and the emperor was killed in the battle. The castle was used and rebuilt over the centuries. Construction equipment-mixed masonry with decorative brick layers and plaster - tells us the era between the XII-XIV centuries. In countries from the front door is a brick built Cross monogram ruler of its XIV century alphabetic characters indicate the name Michael. It is known that by 1328 the Bulgarian King Mikhail, fought against Andronikos III, reaches all the way to Dimotika. It is possible that during this campaign, the Bulgarian king resumed quickly fortress. 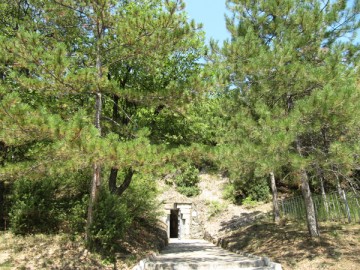 Rock Churche village Matochina
This rock church was made in a rocky hill at 2 km southwest of the village Matochina. It dates back to the 10th century. Shaped like a rectangular reservoir premises in which is entered through a small, also vaulted corridor. The total length of the facility is 14meters and the corridor - 4.20 m. The height of the arch is 3 meters. On the left from the entrance can be seen carved into the rock steps leading to the crest of the hill where the church is located. There are preserved traces of tombs carved into the rock.
Favorable natural conditions in Svilengrad region and its strategic geographical location cause it to be inhabited since ancient times. The oldest traces of human life date from the late Neolithic and Stone-Age. During the period bronze and iron lands around today Svilengrad been inhabited by the Thracian tribe Odrysaeans. From the time of the Thracians remain traces of settlements, tombs, temples, sanctuaries and more.
Many other testimonies are from the Roman era. Near Svilengrad Romans built roadside stations Ramis and Burdipta.
On Hisarluka hill they built a fortress, the walls of which are still visible, buried in the ground. There arose settlement known in ancient manuscripts as Burdenis (Burdipto).
The area was a bustling crossroads arena of incessant wars and the establishment of the Bulgarian country. This region is connected to one of the largest battles in Medieval Bulgarian history: in 1205. Kaloyan's troops inflict the first major defeat of the hitherto invincible Latin army led by Emperor Baldwin. Bulgaria fell under Ottoman rule for long determined the historical fate of the population of Svilengrad region. Here a settlement, known as Kinekli which located on the shortest route from Istanbul to Europe, and had a strategic importance. 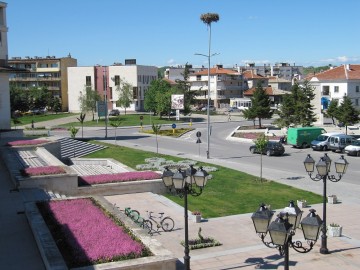 Svilengrad belongs to municipalities with mixed economy. Transport as an economic activity is increasingly important in the economic structure of the municipality. Development of the road network is strongly influenced by the presence of two transport corridors: European transport corridor "Europe - Asia" provided by highway E-80, and the prospects regional corridor connecting the region with Svilengrad-Charmanlii Burgas, passing through the territory of Strandzha-Sakar. A new transport-communication is planned Svilengrad- Levka-Lesovo border. The rail transport is represented by a line Kalotina-Sofia - Plovdiv - Svilengrad - Istanbul.
Transportation and geographical position of the municipality suggests significant participation of foreign capital in economic activities. The estimates of the financial resources predict increase in this participation. Local government provides suitable land, builds and improves the basic infrastructure. The efforts are active to develop projects, initiatives and developments from both the municipal government and by individual citizens, associations and entrepreneurs. With active charitable and social activities here are dealing Rotary Club, Women's Club, Youth Organization, Foundation "Svilengrad 2000." Recently opened the country's first center for financial ombudsman  services. Began operating Svilengrad Chamber of Commerce and Chamber of Commerce Svilengrad.
For the development of agriculture in the municipality there are excellent soil and climatic conditions. 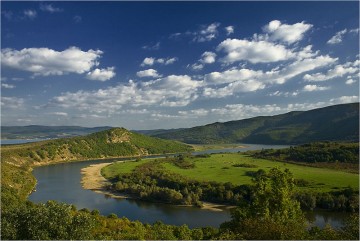 Advantage of the municipality, especially at its southern side has high ecological purity of the earth and nature, due to the absence of any polluting industries. On regional ecocards it is marked as fresh, green stain that provides strong benefits of any agricultural products from the region.
Agricultural areas occupy more than two-thirds of the municipality. The nature of the terrain - flat, hilly and low footprint given the structure of land resources. Have good soil and agro-climatic conditions in the municipality for the development of viticulture and horticulture, and dairy farming.
With these favorable factors should be attributed more available land resources and production traditions and experiences of the population. Traditions in agriculture are associated with the cultivation of wheat, barley, sunflowers, vineyards.
Important structure-traditional technical culture municipality tobacco. There are grown two types of tobacco - Oriental (about 3.5 thousand decares) and Virginia (about 0.5 thousand decares).
A big advantage of the municipality is that it is a region with the most sunny days in greenhouse production of early, expensive vegetables and fruits.
Based on natural geographic, border and transport and communication functions of Svilengrad, its role and importance in the development of Haskovo region and the future seems to be mainly in agricultural production, in the transport service of international importance in tourism and the development of cross-border cooperation Turkey and Greece.
Using the unique advantage of location Svilengrad, establishes common as a center of enhanced cooperation. Here will be focused modern communication and information units for complex services with business centers, tourist centers and market areas with presentable function for the region, attractive accommodations and food, and entertainment venues.
Svilengrad becomes a sustainable part of the national territory and an attractive wide open door of Bulgaria to the world.