The town of Sozopol has a population of 4 987 and is situated 31 km south-east of Bourgas, and 421 km south-east of Sofia. The town lies on a small rocky peninsula in the farthest southern part of the Bourgas Bay. A one hundred-metre long strip of land connects it to the mainland. After 1925 the town started to grow in the direction of Harmanite Area and today it occupies considerably larger territory on the mainland. 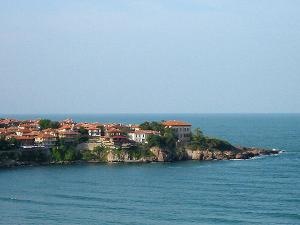 The first settlements belonged to the Thracian tribes of Nipsei and Skirimian. In 7th century BC Greek colonisers settled there and called the town after Apollo, the God of arts. Apolonia developed mainly as a trading centre for honey, wax, corn, wine, olive oil, olives, textiles, jewellery, and pottery. The numerous finds are evidence that this small town used to be the trading centre of the whole of the Black Sea coast. Much earlier in 13th century BC the argonauts led by Iazon, Heraklitis and Orpheus came ashore. The love for travelling and discovering made the inhabitants of Apolonia in those times travel, trade and found new colonies. So were founded the settlements of Anhialo and Pirgos, Termopolis and Aetos. The town was included in the union of sea town-states founded by Percales. Apolonia was frequently in economic and political dispute with the Doric inhabitants of Messembria; wars were even waged. At the time the island of Kirik was mainly inhabited. Apolonia sought help from Philip of Macedonia against the attacks of the Scythians. It was included in the territory of the Macedonian State at the time of Alexander the Great and was constantly subject to invasions but it struggled against the attacks of a number of Nomadic tribes flowing from north and west. The town fell under Roman domination in 1st century BC and was severely ruined by the armies of Marcus Lucul. It is an interesting fact that the Romans quickly restored the ruins, built new temples, and ordered a thirteen-metre high statue of Apollo by the sculpturer Kalamis. The statue was sent to Rome as an example of the arts of this particular Roman province. As early as 6th century Apolonia minted coins of its own. The Roman domination provided three centuries of peace until the huge invasion of the barbarian tribes. It was only in 5th century that the town was included in the territory of Byzantium. 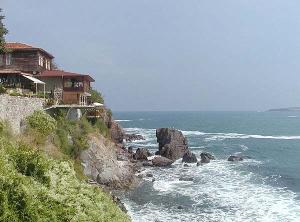 During the reign of Khan Kroum it was within the borders of Bulgaria and like all other sea towns it frequently fell under the rule of Byzantium. In the Middle Ages it preserved its status of a district town. It was severely devastated in the middle of 14th century during an attack by the Genoa fleet. Later it was conquered and sold by the knights of Amadeus of Savoy. After a long siege the town fell under Turkish rule in 1453. Only wooden houses have been built there ever since; the oldest samples can be observed even today in the unique old streets. Sozopol welcomed the Liberation as small fishermen?s settlement. Later the town became the biggest fishing centre of the Black Sea coast and developed recreation and tourism. The famous Tsar?s Beach is located to the north of the town. Nestled between the rocks to the south of the town is the Raiski Beach (Paradise) and further southwards ? the Kavatsite. The Harmanite Beach is immediately to the south of the so-called ?new? town. An ancient necropolis was found here in 1993 and excavations are still going on.

The landmarks in Sozopol are many, but none of them can be separated from the rest since all of them impact the visitors as an attractive ensemble. The ancient churches from the Revival Period - St. Zosim Church and The Holy Virgin Church. The following houses are quite interesting: the house of Dimitur Laskaridis (17th century, now an art gallery), a fish trader, Ana Trendafilova?s (the house with the sun), of Kourtidis, Lina Psarianova?s (now arranged as Stenata Restaurant), of Grandmother Koukoulissa Hadzhinikolova (today housing the office of Sturshel Newspaper), Metropoliev?s House (a medical centre at present), of Kreanoolu, etc. The old cobbled streets and high fences in front of which the old women sit and chat, knit laces and sell fig jam, are inseparable elements of a whole complex of three-centuries of history. Interesting places to visit are the Archaeological Museum and the Art Gallery.

At the beginning of September each year the town hosts the big Apolonia International Art Festival. 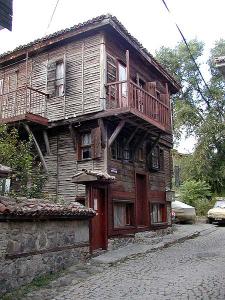 There are lodgings in the old part and in the new part of the town as well. The Radik Hotel and the Groudov Hotel are among the well-known ones. There are a lot of camping sites around Sozopol where many tourists spend their holidays: Kavatsite (The Willows), Smokinya (The Fig), Vesselie (Feast), Zlatna Ribka (Golden Fish) and Gradina (Garden). They offer bungalows of different categories, sites for caravans, tents and automobiles. The prices are quite moderate, the service and the hygiene are of good quality.

The traditional establishments are the small coastal restaurants, small private places both in the old and new part of the town, the stalls for fish, the pizza-huts, the snack-bars scattered all over the camping sites. Interesting catering establishments are Vyaturnata Melnitsa (The Windmill), Sozopol Tavern, Athens Tavern, the restaurants Xantana, Neptun, Drouzhba Fishing Boat, Orpheus, Olymp and Lilia. Some of them are very interesting as they are built on ancient remains and houses after detailed archaeological research and restorations. Such an example is Stenata Restaurant (The Wall) whose basements were used as a warehouse for grain far back in time, and Kladenetsa Restaurant (The Well) which was built at the place of a spring, which supplies the town with drinking water via water pipes. The prices at the restaurants are high, moderate prices one can enjoy at the camping sites and in the small restaurants along the beach. There are a lot of grocer?s and marketplaces. One could buy fish directly from the fishermen at the quay.

To the south of Sozopol there are a number of fjords-like formations. The coast here is particularly high and cut in by the incoming waves. There are numerous secluded coves.

Mt. Bakurluka (376 m high) is above the town, and some 20 km to the south is the mouth of the Ropotamo River. There is a biosphere reserve, camping sites, very near is the famous Zmiiski Island (of the Snakes).