Information about Sopot, the town of Sopot - Bulgaria 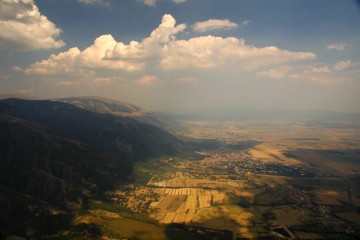 Sopot is located 5 km west of Karlovo, in the foothills of Stara Planina Mountain. Ridge of the mountain here is crowned with one of the most personal mountain peaks, beginning with peak "Dobrila" /1868 m/, "Ambaritsa” /2166 m/, the harsh and difficult to reach peak "Botev" /2376 m/. This is actually the most beautiful, the most attractive stone tale where Stara Planina landscape resembles most closely to alpine terrain. Anevo Village is located 2.5 km west of the town of Sopot. 500 m north of the village are the remains of a Roman road station /Hisarlaka/. Slightly to the north are the remains of the medieval fortress-city "Anevsko Kale" of XII - XIV century - one of the best preserved medieval fortifications in the country. Sopot municipality is located at the southern foot of the mountain at an altitude of about 510 meters above sea level. Cross the municipality premier road Sofia - Karlovo -Burgas line and the sub-Balkan railwaySofia- Burgas. The municipality maintains regular bus lines Karlovo and other settlements Stremska valley, Plovdiv, Sofia and Troyan.
Settlement network covering two settlements developed mainly in the lower part of the municipality and in the lower parts of the mountain slopes surround the western part of Karlovo valley. The altitude of the territory of the municipality varies within 500-510 meters.
Climatically, the municipality falls within the transitional continental climate. Compared to other fields -Balkan climate is milder and warmer. Temperature inversions are rare. Winters are mild with an average temperature in January around 0 and minus 1 degree; the average number of days with snow cover is 20-25. In the summer, which is moderately warm, there are 60 days with average temperature around 20 degrees. 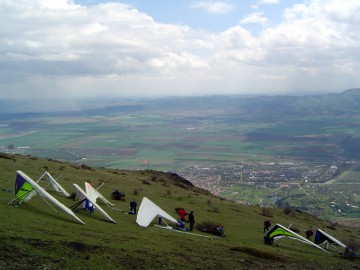 Land of the municipality of Sopot in size is 56,000 acres (56 square kilometers). By size within the municipality may be included in the group of municipalities with a small amount of surface area. According to this indicator, it ranks among the last in the Plovdiv region.
One of the biggest attractions of Sopot is the house where Ivan Vazov was born. It is located in the central part of the town square "Ivan Vazov". The actual house was destroyed in the years before the liberation of Bulgaria from Ottoman rule and rebuilt in 1932. Among other attractions, the monastery "St. Spas", "St. St. Petar and Pavel", the water mill of grandpa Stoyan, Rada School, Monument "Introduction to the Holy Virgin Mary", erected in the square bearing the same name.
Near Sopot are the ruins of Anevsko Kale - Bulgarian fortress from the 12th century. Sopot Kale is another fortress, located northeast of the city. Sopot is the starting point of the Troyan Balkan. The chairlift, which is located in the northwestern part of the city, takes a height 1600 meters in just 30 minutes. From the top of the lift easily and quickly in just 5 minutes, you can reach Nezabravka. Intermediate lift station is located in the area Pochivaloto (about 1350 m above sea level) - a favorite place to take off the delta and para- planners. For hikers there are well-marked hiking trails from Sopot to Nezabravka hut, Dobrila hut and the peaks Ambaritsa and Botev. 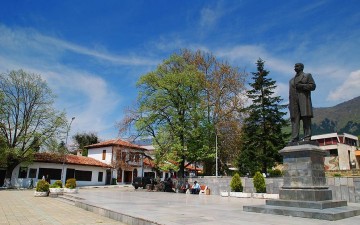 Sopot is connected by bus lines to Karlovo and the surrounding villages. From Karlovo in small intervals there are buses leading to the hometown of Ivan Vazov. Distance between Sopot and Karlovo is about 5 km. The railway station is connected to the Sofia- Karlovo – Burgas, it is one kilometer south of the town of Sopot. There are buses that go there and back. The main road Sofia- Karlovo -Burgas passes through the town of Sopot. Located about 120 km from Sofia, about 225 km from Burgas, 55 km from Plovdiv, 77 km from Stara Zagora and 166 km from Rousse.
For hikers there are well-marked hiking trails from Sopot to Nezabravka hut, Dobrila hut and the peaks Ambaritsa and Botev. Patriarch of Bulgarian literature Ivan Vazov was born on 9 July 1850 in Sopot and was raised in the old house of his family, built in the XVIII th century by his grandfather. It was burned in July 1877 during the Russo Turkish War. The project to restore the native home of the poet was made ​​by the architect of the Archaeological Museum in Sofia Alexander Rashenov based on the instructions of General Georgi Vazov and Vazov`s sister Vala Fetvadzhieva. In 1920 by request of the artist George Cherkezov, Ivan Vazov made ​​a sketch of his house, which is also used for the reconstruction of it.
In 1930 Italian professor in Bulgarian language and literature at the University of Rome Enrico Damiani visited Sopot accompanied by the writer Nikolai Raynov both recommend hastened the recovery of Vazov`s House. 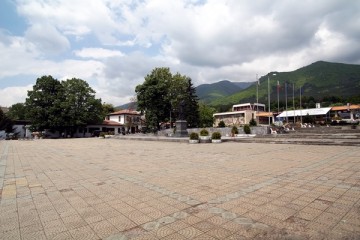 Construction of the house began in 1931. The interior of the house was made under the guidance of the Director of the Ethnographic Museum in Sofia S. Kostov and based on information Vazov brothers and Vala Vazova gave. As a source for restoration of the interior was used Vazov writing works, especially his novel "Under the Yoke".
Radino school was built in 1850. It is one of the first girls' schools in Bulgaria. It was burned in 1877 during the Russo -Turkish war together with the church "St. Peter and Pavel" and in 1879 was restored. After the liberation in 1917 it was a carpet school, and from 1917 to 1930 due to fire at the new school which burned, classes were conducted again in the girls' school and some private buildings. The upper floor was used as a school, and the bottom - like a theater at the community center. For the arrangement of the school was used information from the memories of Parashkeva Hadji Gokova. "I remember very well the old school - girls. It consisted of a large long room (salon) and a smaller one on the east side which was made the seat of the teacher. Meter and a half more raised from the ground with two ladders and around surrounded by crafted flawless boards. Below was the prison that served to close an offending student. There were two front desks. Both sides were placed boards as a ledge, they serve students to learn the letters in sand placed them. On the wall hung a few boards with printed lessons thatwere taught before us". On "pesochnitsa" – the sand boxes, female students learn to write, in the tables taught reading. Behind the front desk were two "ten simple rank" which were distributed students by year. 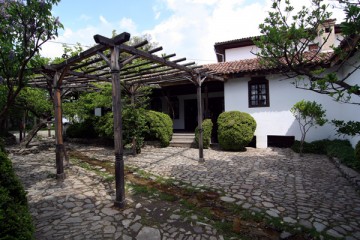 Described in these memories, with some modifications, can be seen now. One room recreates the classroom during the Renaissance. In another room is placed a permanent exhibition of Vera Vazova - niece of the poet, with graphics of view of the old Sopot. There is also exposure to the development of educational work in the city.
Located under the southern slopes of Stara Planina Mountains, between the rivers Manastirska and Leevitsa, picturesque mountain town of Sopot has an interesting and rich history. Telling about the ruins of the fortress Anevsko - old Bulgarian fortress of XIII-XIV century was mentioned in Turkish documents after the fall of Bulgaria under Ottoman rule with the name Akche Klise - White Church.
Sopot was founded at the beginning of the XIV century Its name comes from the old Bulgarian word “sopoh”(spring water which passes through a wooden or metal pipe). Here, as in nearby cities produce braids, leather, Sopot silk , carpets, glass, rose oil, jewelry and more. Sopot is known for industrial, commercial and cultural city in the Ottoman Empire. Several times it was attacked and robbed, and during the Liberation War in July 1877 was burned. Much of the population was killed and some escaped. 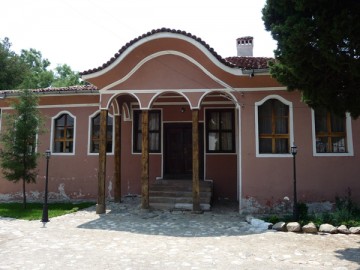 Sopot is associated with the rebels Dobril and Kara Ivan, also with the work of Vasil Levski and Kableshkov, the bands of Hadji Dimitar, Stefan Karadza, Hristo Botev and with the volunteer bands formed during Liberation War.
In the dark years of slavery, the city is famous for its schools. The city is the birthplace of the patriarch of Bulgarian literature Ivan Vazov in the period 1950-1965, the Sopot was renamed Vazovgrad.
The house Museum "Ivan Vazov" in Sopot carries the atmosphere of the Renaissance with its unique color.
Lit for each Bulgarian heart are places in Sopot related Vazov creativity and historical past. In the girls' convent still echoing footsteps of the Apostle Vasil Levski blue-eyed, always found a safe haven there. Silent witness to the grand era and the burning of the city in 1877 was a more than 350 -year-old monastery vineyard. 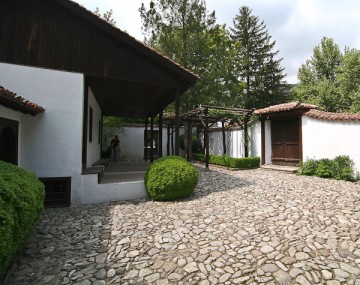 In the XV century on the site of a small church "Vavedenie Bogorodichno" existed a chapel. Monastery emerged in the seventeenth century, the south cell on the second floor was a religious school, in which taught the school teacher Nedelya Petkova. On the first floor were nun Christina's cell and the entrance to the hideout in which this patriotic woman hid Levski in 1869 -1872, during his revolutionary activities. From here Levski sent and received correspondence. During 1877 the convent was burned by the Turks, and nun Christina - brutally murdered. Her grave is located near the south wall of the church.
"St. Peter and Pavel" is located near the convent. It is also described in the novel "Under the Yoke", and was burned in 1877 and restored after that. Radino school is charted in the first Bulgarian novel "Under the Yoke" of Ivan Vazov with his heroine - Renaissance teacher Rada Gospozhina.
Girls' school is now a museum with exposure to education in Sopot and recreated interior of a classroom. It is also a permanent exhibition of "Vazov`s Sopot" exhibit by Binka Vazova - niece of the poet. 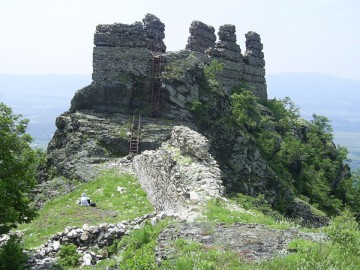 White stone fountain in the monastery carved into the marble with double-headed eagle, the symbol of the people's faith in the liberating mission of Russia, the frescoes in the church " Vaznesenie Gospodne" of saints whose faces are gouged out by Turkish bayonets - every corner here is page of the revolutionary past of the city. There was another secondary school and a singing school. In the monastery "St. Spas" Vasil Levski became deacon Ignatii.
Near the monastery "St. Spas" is the lift station with open cabins, that allows guests of Sopot to quickly reach the hut "Nezabravka " giving shelter to many tourists. Nearby is the hut "Dobrila”.
Sopot is a city with a modern look. In the city center are City Hall, the library and the monument of Ivan Vazov.