The town of Silistra has a population of 42 153 and is 20 m above sea-level. It is situated on the right bank of the river Danube, on 375th kilometres away from the river mouth, at the point where the river enters the territory of Romania and the terrestrial boundary between Bulgaria and Romania begins. It is 442 km and 122 km north-east of Sofia and Rousse respectively, 108 km north-east of Razgrad, 113 km north of Shoumen, and 92 km and 143 km north-west of Dobrich and Varna respectively.

There are very few Bulgarian towns that can compete with Silistra in richness of historical past. The town is the successor of the Roman Durostorum (translated as “solid fortress”, built by Emperor Trayan). It was first mentioned in 105. In 169 during the reign of emperor Marcus Aurelius Durostorum became a municipal – an independent town (in 1969 people celebrated 1800th anniversary of the town) that domineered as a centre of the Roman province of Dolna Mizia. The town was one of the early centres, which promoted Christianity. In 303 the soldier Dazius was beheaded, and the local inhabitant Emilian perished on the stake; both of them were partisans of the new Christian faith. They were declared saints and included in the catholic calendar.

The great commander Flavius Aecius was born here; he was the one who defeated Atila, the Huns’ leader whom the inhabitants of Rome had considered a real horror. The successor of Rome, i.e. Byzantium, restored the ruins of the town during the reign of emperor Justinian in 6th century and gave it the name of Dorostol. Until 600 it had been an episcopal centre.

The Bulgarians called it Drustur and after the adoption of Christianity it became the main religious centre in the country. Under the Byzantine rule it was a main town in the region of Podounavie. In 1074 a rebellion against the Byzantine under the leadership of Nestor broke off. The town was an important fortress of the Bulgarian kingdom in 13th-14th centuries. In 1388 the Romanian leader Mircha Stari conquered the town, and after 1413 it was within the territory of the Ottoman Empire.

The town received its present day name during the Turkish rule as a result of the preceding Diristur and Dristra. The poet Partenius Pavlovich was born in Silistra in 1695. During the Russian-Turkish wars at the end of 18th century and the first half of 19th century the great Russian generals Roumyantsev, Souvorov, Bagration, Kou-tou-zov, Dibich Zabalkanski took part in battles near the fortress of Silistra (in fact there were two fortresses - Medgeditabia and Arabtabia on both hills above the town) which later on became part of the defensive rectangular of the Turkish empire (Rouschouk - Silistra - Varna - Shoumen).

In 1958 the inhabitants of Silistra received as a present the key to the fortress of Silistra which had been seized as a trophy on 12 June 1810 by generals Kamenski and Koutouzov, and kept in Sanct Petersburg. Between 1828 and 1835 Silistra was a free town as a result of its conquest by the Russian army with captain Georgi Mamarchev at the lead (a Bulgarian in Russian service). The great writer Lev Nikolaevich Tolstoy took part in the Russian siege in 1854. In 1812 a monastery school was established, and in 1891 - a pedagogical school, in Silistra. The Swiss Louie Aier spent some time teaching physical education (his name was associated with popularising a number of sports in Bulgaria) in the town (as well as in Rousse and Lom) and died as an officer in World War I near Doyran. From 1913 till 1940 the town was within the boundaries of Romania. 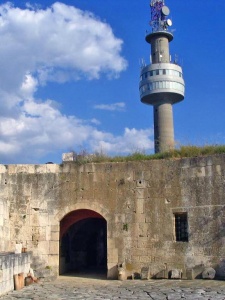 The landmarks of the town are, the Town Museum of History, the Ethnographic Museum. In 1942 a Roman tomb was recovered (4th century, from the time of emperor Theodosius I). It is a tomb with arches, 3.20 m wide and 3.60 m long. The most interesting thing in it are the frescoes. It is situated in the south-eastern part of the town. The Roman Necropolis of an eminent magistrate from the time of emperor Prob (276-282). He had been buried together with his horses and chariot; very precious fragments of the chariot made of electron (gold and platinum) have been preserved. Parts of the antique Roman fortress and the border fortification were discovered at different places in the town and along the bank of the Danube River (in the town park). The Art Gallery is located in the centre.

There is a drama theatre named after Sava Dobroplodni, it is located in the central part of the town.

Silistra is a university centre. There is a higher pedagogical school, branch of Rousse University.

The Zlatna Dobroudzha Hotel. The Silistra Hotel. The Orbita Hotel two-star, offers 20 double rooms and 6 three-bed rooms. Of great interest is the attractive restaurant at the TV tower with a wonderful panoramic view. Danube Tourist Hostel (on the bank of the Danube River, offers 33 beds in four-bed rooms). Among the numerous catering establishments there are several worth visiting: Beliyat Kalpak Restaurant (south-east of the centre, 24-hour service, offers national specialities at reasonable prices), Beli Brezi Restaurant (in the southern part of the town, offers delicacies and national food in a cosy atmosphere).

Bus and railway transport connect the town with the rest of the world. There are regular bus lines to Rousse, Razgrad, Shoumen, Dobrich, Varna and other smaller towns and villages in the district. The bus station and the railway station are located next to each other in the Industrial zone (the west end of the town). The town is the final railway station on the local railway line Samouil-Silistra (an extension of the Rousse-Varna line) and thus is connected with the national railway system. Silistra has a river station, too, but for the time being the transportation of passengers along the Bulgarian coast of the Danube has been suspended. Excursion tours along the river are only carried out. There is regular public bus transport.

In the immediate proximity above the town is The Krepostta Park (The Fortress). There is a rich archaeological museum in it.

The Srebarna Biosphere Reserve is 16 km west of Silistra near a village having the same name. It comprises the Lake of Sre-barna and the surrounding slopes of the Danubian bank occupying a territory of 600 hectares. In the periphery the lake is overgrown with cane and bulrush verdure, water lilies, marsh marigold, marsh fern, duckweed, etc. Various kinds of birds nest here - some 150 protected species of marsh birds like pelicans (the only colony in Bulgaria), black coots, water swallow, egrets, ibis, wild geese, 11 species of wild ducks, etc. Six species of fish, tortoises, snakes, etc. inhabit the area. There is a museum arranged. Felix Kanits who visited it in the second half of 19th century called the lake “the Eldorado of marsh birds”. Being natural heritage of world significance the Sreburna Reserve is under the protection of UNESCO. There is regular bus transport from the town.

Eight kilometres west of Silistra is the biggest village in Bulgaria called Aidemir (9125 inhabitants). There is a regular public bus line to and from it.

The Alen Mak Hut (Red Poppy) (5 km away from the town, in the rest area near the town) offers 30 beds in two, three and seven-bed rooms. Nearby is a bus station of the town bus. It takes an hour or so to get there on foot.

Half of all apricot orchards of Bulgaria grow in the region of Silistra.