Information about the spa resort - Sandanski

The town of Sandanski has population of 26 695 and is 240 m above sea level. It is situated in South-Western Bulgaria, right next to the west of the Pirin Mountain, along the banks of the Sandanska Bistritsa River which shortly after passing the town flows into the Struma River. 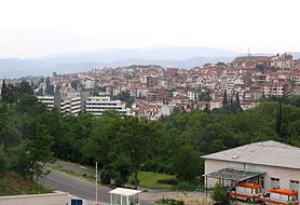 Sandanski is 23 km north-east of Petrich, 22 km north of Kulata, the border checkpoint with Greece, 65 km south of Blagoevgrad and 166 km north of Sofia. The area of Sandanski has the best climate in the whole country of Bulgaria. The town with its hot mineral springs, with temperatures 33-83C, has become a famous resort of international significance. On the place of the town there was an old Thracian settlement that had sprung up near the hot mineral springs. The first inhabitants were the tribe called medi. With the arrival of the Romans the small settlement was extended and improved. The curative springs were impounded and a big public bath was built (asklepion). Most probably the settlement grew into a town during the reign of Emperor Pius (138-161) and was surrounded by fortification walls made of pebble stones from the local river.

In the centre of the town is the Museum of Archaeology, exibiting remains of the Episcopal Basilica and treasuring material evidence of more than 27 centuries. Particular attention should be paid to the St. Georgi Church from 1861 - it is the only building preserved from the Revival Period. 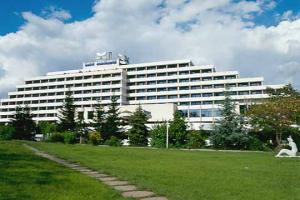 rmines the type of the transport links. There is bus transport to and from the town, which forms a branched net in the adjacent towns and villages. The bus station is located in the centre of the town on the right bank of the Sandanska Bistritsa River. There is railway transport connecting Sandanski to the big towns of Blagoevgrad, Doupnitsa, Pernik and the capital city Sofia as well as to the rest of the railway system of the country.

The town of Sandanski as well as Bulgaria as a whole, are proud of the unique Town Park called - Sveti Vrach. Its territory is 344 decares. More than 100 tree species and more than 150 flower species grow there. The small stone slopes resemble the Alpine outlook of the white marble massif of Pirin rising to the east. Suspension bridges hang over the foamy and rapid Sandanska Bistritsa River. A number of alleys, wooden alcoves, playgrounds for children and other specific corners offer unique conditions for rest and entertainment. The verdure of the park surrounds the town stadium, th 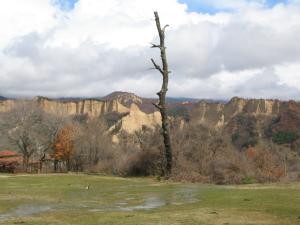 e open-air theatre, the open swimming pool, an artificial lake with a bar, a lot of boats and water wheels, an original restaurant with separate niches in the shape of casks, etc. The Town Park has naturally merged in the bigger forest-park that surrounds the town as in a horseshoe, which people call the green necklace of Sandanski.

24 km south-east is the town-museum of Melnik, 6 km further on is the Rozhen Monastery. 18 km north-east within Pirin is the Popina Luka Resort it is 1230 m above sea level. A lot of private villas, bars and restaurants, and several hotels are situated here. The eleven-metre high Popina Luka Waterfall is located at the Bashliitsa River which is one of the initial tributaries of Sandanska Bistritsa River it is running through the Popina Luka Resort. The resort is a point of departure for several marked tourist routes in Pirin.