The resort Saint Vlas has a population of 3000 people. It is located on the shore of the Black Sea Coast and in the foot of the south slopes of the east Stara Planina mountain. The settlement is located in a close proximity to the town of Bourgas - 40 km, Nessebar - 8 km, Sunny Beach - 4 km, Paradise Beach - 1,5 km, Elenite 2km.

Saint Vlas was found in the II century as a Thracian settlement with the name Larisa, in 14 century it was given the name of Saint Vlas - farmer, healer and patron of the merchants. Over the years of the ottoman yoke, a few different names were known for the village and all of them are related to the monasteries around the village. The ottomans used to call it Kiuchuk Manastir, in the registries it is written as the village of Manastir. 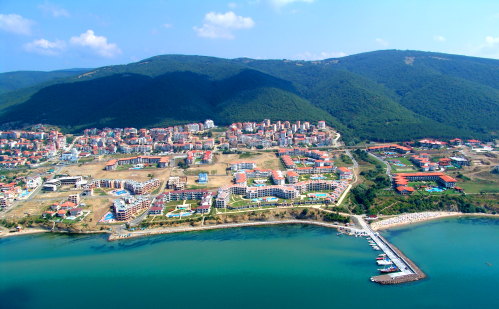 The perfect combination - Mountain with sea, make Saint Vlas in a village with unique climate, favourable for curing lung diseases.

The sandy beach is with total length of 1.5 km and average width 15 meters. The main beach is the central from hotel Sineva to hotel Sun Palace, the small beach from the camping from complex Sun Palace to complex Reviera and the beach from the new Yacht Marina bellow complex Manastira. In the east end of the beach shore is located the water base of the local fishermen and next to it is a new modern yacht marina.

The region where the village is located is the biggest tourist zone in Bulgaria. In practice it is the unrecognized Bulgarian Reviera formed by Aheloy, Ravda, Sunny Beach, Zora, Sanatoriuma (between Saint Vlas and Zora), Intsaraki, Saint Vlas, Paradise Beach (Robinzon) and Elenite. It is assumed that in the near future this huge and amazing tourist zone will reach to Cape Emine which is located 5 km away from Saint Vlas.