Information about the mountain town of Razlog

The town of Razlog has a population of 13 403 inhabitants and is 825 m above the sea level. It is located in the Razlozhka Valley, in the hug of 3 mountains - Rila to the north, Pirin to the south and the Rhodopes to the east. It is nestled among two hills - Golak to the north and Sarovitsa to the south. Nearby flows Mesta River. The town is 155 km to the south of Sofia, 53 km to the south-west of Blagoevgrad, 141 km south-west of Plovdiv and 6 km north of Bansko.

The past of Razlog to a great extent was predetermined by its central location. The first known settlers in these places were the Tracian tribes satri and dii, and later - the kelts and slavs. The accession of Razlog to the Bulgarian State took place in 847 during the time of khan Pressiyan and its subjugation by the Turks - in 1382. As a name Razlog is mentioned in the Charter of the Bizantine Emperor Vassilii II from 1019. The remains of an early Christian basilica (4th century) near Razlog and the ruins of many churches and sacred places from the Middle Ages and from the period of the Ottoman domination testify for the heroic struggle of the Christian population in defending its faith. After the Berlin Treaty Razlog remained under Turkish domination. Its active population actively participated in the struggle for Bulgarian enlightenment, independent church and national liberation. The most turbulent events during the Kressnensko-Razlozhko (1878) and Ilindensko-Preobrazhensko (1903) Uprisings in the Pirin Region developed here. The town had the name Mehomia until 1925. 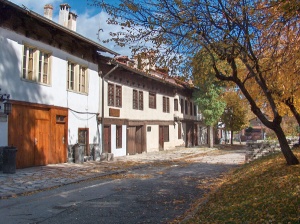 The sightseeing tour of Razlog is a pleasant and interesting experience. 41 residential buildings of the Razlog-Chepino house revival architectural type have the qualities of monuments of culture. They are mostly at Macedonia Square and in Vuzrazhdane Street. Houses typical for the 1930-ies add specific outlook appearance to the main square of the town. The Parapounov’s House at Macedonia Square (5 minutes from the central square, tel.: 0747 2060) functions as a Museum of History. The Kiprev’s House Ethnographic Museum Complex exibits the old crafts and a wide variety of folk costumes and textiles from the region. The old St. Georgi Church from 1834 is not attractive in outlook, but the murals and the wooden panelled iconostasis, decorated with icons and partially with woodcarving have a high artistic value. The comparatively new Holy Annunciation Church from 1939 is a very imposing building whose painting still goes on.
The water mill for processing woollen cloth at River Yazo (10 minutes to the west of the centre) is attractive and is often used even now.

With the mediation of the museum quide, workshops and houses of masters craftsmen, weavers, knitters and creative artists can be visited – all of them being modern followers of the traditions in artistic clay, wood and textile processing.
The opportunities for accommodation in the town are so far comparatively limited: N. Popov Familty-type of Hotel, G. Krainova House-Hotel, M. Kyurkchieva House-Hotel. The three of them are situated in the southern part of Razlog. Numerous catering establishments offer local Bulgarian cuisine - Zahova Maaza Tavern, Koukeri Tavern, Pirin Restaurant, Murata Restaurant and many others.

Razlog is a big transport centre as regards to bus services in the region of Pirin. It has regular connections with Sofia, Blagoevgrad, Gotse Delchev, Bansko, Yako-rouda, Belitsa, Velingrad and many other smaller settlements. There is a big bus station in the town. Razlog has a railway station, as well, on the narrow-gauge railway line Septemvri-Velingrad-Dobrinishte.
The central location of Razllog makes it a starting point for two mountains - Rila and Pirin. To Rila one can set out along a marked trail from Predela Saddle, distanced at 12 kilometres, where all buses with destination to Blagoevgrad and Sofia have a stop. One can set out from the nearby village of Bachevo (6 km to the north) to the Macedonia Chalet and Chakalitsa Chalet, but the trails are not marked. For the opportunities round Pirin refer to the Pirin Mountain related section herein.

In the vicinity of Razlog there are interesting natural sights and archaeological remains, situated in picturesque places, that are worth visiting. On the slopes of Pirin one can find: the Iztoka protected area (6 km south-west of the town) where the mineral wa 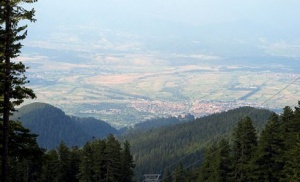 ter springs Iztoka and Yazo sprout out, and nearby are the Spropadnaloto and Mechata Dupka Caves.  The large protected area of Kroushe (7 km south-west), notorious as the only habitat of arhangeliev lazerpizium in Bulgaria, where the archaeological remains of a late antiquity and medieval settlement can be found, and close to it - the relics of the medieval Pisanata Church and Byalata Church, as well as the mineral water springs Babina Voda and Vurbovets. In the Kalyata Area (9 km south-west) one can visit the impressive ruins of a late antiquity fortress, the amazingly beautiful Betalovoto Area (10 km south-west) with the comfortable for accommodation and booking Hunter’s Home and VANG.L Hotel-Club.

On the slopes of Rila worthy of special attention are the Stolovatets Area (5 km north-west of Razlog) with the remains of Thracian sanctuary and the Katarino Area (7 km to the west) with its warm mineral water spring, the remains of the late medieval St. Katerina Church and the regularly held horse races on St. Todor’s day (in March).