Information about the town of Radnevo

Radnevo municipality is located in the so called Upper Valley. It is surrounded by the neighboring municipalities: Stara Zagora, Nova Zagora and Topolovgrad Municipality. Total area - 545.150 square kilometers, representing 0.496% of the territory and 10.6% of the region. The region has a mild climate, the average annual temperature is 12,1 ° C.
Administrative center of the municipality is Radnevo, in its structure includes 21 more villages. Fertile land, water and forests cause people to inhabit this region since ancient times. The first settlements occurred 4000 years ago. The first ethnic group inhabited the area is Thracian tribe - pirogeri. The territory is located on the biggest Roman road station Arzos. In the Middle Ages, after the formation of the Bulgarian state, the region became a buffer zone between Bulgaria and Byzantium. In 1964 Radnevo was declared a city.
The geographical situation of the municipality defines it as an important transportation hub through which carried the road connections between North and South Bulgaria. Through it passes the main road E-85 (Rousse - Captain Andreevo), connecting Romania to Turkey and Greece. The city has convenient road links with Stara Zagora (32 km), Sofia (250 km), the Black Sea port of Burgas (180 km) and Varna (310 km). Have a well-built equipment for mobile and fixed telephone and internet.
In the municipality Radnevo run rivers Blatnitsa, Ovcharitsa and Sazliyka. Here is the lake "Ovcharitsa" with an area of 627 hectares. 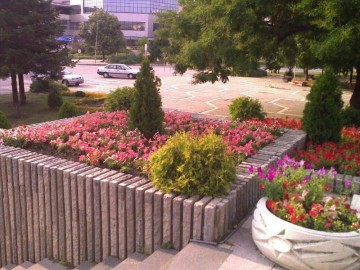 Radnevo ranks one of the first places among the municipalities in the country at the level of socio-economic development, measured by the ratio of gross domestic product per capita. Comparisons in the district plan show that Radnevo municipality is the second highest net income in Stara Zagora region and is a major producer of lignite coal and a major producer of electricity.
Municipality takes monopoly in the production of lignite. Territorial it covers the majority of the Maritza East coal basin and is associated with the energy complex Maritsa East. The extraction of low calorie coal becomes open pit area of ​​103 sq. km. The municipality Radnevo are 57% of the coal deposits in Bulgaria. In Radnevo is the administration of the mining enterprise "Mini Maritsa Iztok", the production of which is structured in three mines. For industrial use deposits of gypsum and marble. 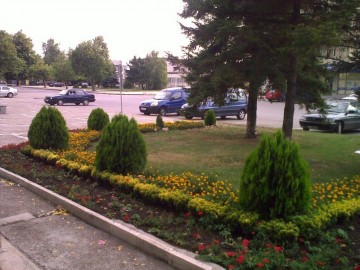 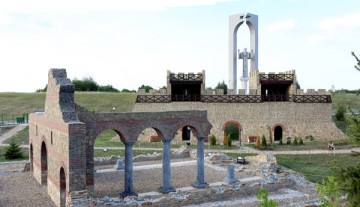 The municipality Radnevo covers geographical area with a continental climate, with little influence of Mediterranean cyclones. In winter Stara Planina is a natural protection against the cold continental masses coming from the north and northeast. As a result, winter is much milder than in the temperate continental climatic sub-region of northern Bulgaria. The average annual temperature is 12, 10 º C. The average relative humidity is 70%.
Rainfall amounts are not evenly distributed throughout the year. There is one main peak in May and June and a minor in November-December. The main rainfall in August and September and the secondary, in February and March. The percentage of snow is relatively small, forming snow does not stay long. The arrangement of the mist to a large extent dependent on the heat balance, the minimum air temperature, high humidity and total evaporation of the development process synoptic. The area is characterized by a normal number (28.0) days of fog a year. The prevailing wind direction is north-northeast and speed ranged mezhdu0 3 and 5, 1 m/s. Orographic characteristics of the region influence the direction and speed of wind. High temperatures and insufficient rainfall in summer and autumn enhance the impact and duration of the typical summer-autumn drought. Winters are mild and dry. Despite the limited rainfall climatic conditions are favorable for the development of agriculture. 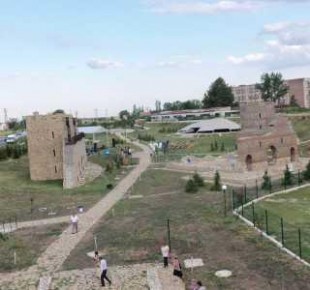 According to the most plausible story of creation of the settlement is around 1700 when Radna grandfather, along with other Bulgarians settled in the region. They are most appropriate for the fertile black soil, the presence of large amounts of water and mild climate. Gradually the village build a convent and monastery mother. In 1873 years began construction of the church "St. Ivan Rilski" with funds from donations. Seventy years on 19 century were important for the development of Radna Mahle and the region. Prez1872-1873 was built the railway Simeonovgrad- Radnevo- Nova Zagora by the French company "Baron Hirsch". After building its trade in the region is developing at a very fast pace. In 1906 Radna Mahle was renamed to village Radnevo and since 1911 on acquires the county center. On 7 September 1964 Radnevo, the city was named officially. Development of energy complex “Maritsa Iztok''' after 1960, dramatically changed the lives of people in the community and connect them permanently with coal mining and energy. In 1986, with the creation of the Expedition "Maritsa Iztok" marks the beginning of the Archaeological Museum "Maritsa Iztok" in Radnevo. They conducted extensive fieldwork and research work. The museum exhibits are arranged in several funds: Prehistory, Antiquity, Middle Ages, ethnography and numismatics. Around 01.01.2005 the museum owns 3 106 units already.
3 organized conferences, 12 exhibitions and issued volumes of the series "Maritsa East archaeological research”. In 2004 was created a club for history and archeology for kids. In archaeological terms, covering the municipalities Radnevo in recent years the museum has established itself as a reliable partner and significant scientifically Institute. Pride of the museum is revealed in the municipality Radnevo previously unknown to science early Byzantine fortress. Rescue excavations in the area of ​​"Maritsa Iztok" already a tradition, which completed fund of the Archaeological Museum. Radnevo is not only industry, but also well-developed cultural center.