The town of Provadia has a population of 15 000 inhabitants and is 30 m above sea-level. The town is situated on the banks of Provadia River in the south end of the gorge of the same name. It is 435 km north-east of Sofia, 55 km south-east of Shoumen, 47 km west of Varna, and 17 km south-west of Devnya.

The town is a successor of the Byzantine fortress Provaton (Provat) of 5th century, which in Greek means “sheep”. The Bulgarian medieval fortification town on the same place was called Ovech. The remains of these fortresses can be found right above the town in the region of Tashhisar. In different documents the town appeared with the names of Bourfanto and Ovechgrad. 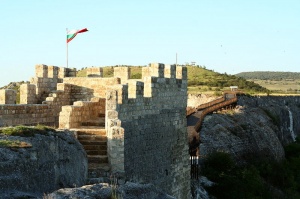 In 13th-14th centuries the town was a prospering crafts and trading centre. Traders from Doubrovnik and Armenia came here to do business. Ovech was among the most important metropolitan centres in Bulgaria together with Tarnovo, Preslav, Cherven, Drustur, and Sredets. It was also called Purvada, Pravada but after all the present day name of Provadia was kept which sounds similar to the first Greek name of the settlement. For decades on end this had been the place where the famous “singing carts” (over 3000 per year) were made; Yordan Yovkov glorified those in such a poetical manner. In 1844 the St. Nichola Church was erected, and in 1849 a secular school was opened with R. Bluskov as a first teacher there.

After the Liberation Provadia underwent a brisk development and now it is the west branch of the industrial axis Varna-Devnya-Provadia. Six kilometres south-east near the railway station of Mirovo is one of the biggest rock salt deposits in the country (about 3900 m deep), which serves for the production of cooking salt. All travellers that had once visited the town had been fascinated by its beauty - “In my opinion there isn’t a more wonderful place than this”, “A remarkable place”, “A town having too nice a view”, “An incomparable town”!

Balneohotel. The Arkovna Hut (in the Prolet Park in the rest zone near the town, 1.5 km away from the bus station and 2 km from the railway station). It offers 15 beds in two-, three-, four-, and six-bed rooms. Reservations in the Tourist Association in the town (see below).

Passengers travel to and from Provadia by bus and train. The railway station is on the main line Sofia-Gorna Oryahovitsa-Varna. There are regular bus lines to Varna, Shoumen, Devnya and other smaller towns and villages in the district. There is a bus station. Due to the short distance to Varna the town favours the use of air and sea transport.

The remains of the medieval fortress (Byzantine, Bulgarian, Turkish) are situated immediately east above the town in the Tashhisar area (or Kaleto).
The rampart from Asparuh’s state is also in the immediate proximity of the town.

The baths in Provadia are 7 km south-east, near the railway station of Mirovo (on the railway line Sofia - Gorna Oryahovitsa - Varna). The debit of the salty (14oC) and sulphurous (21oC) water altogether is about 5 litres per second. It is used in balneo-therapy and balneo-treatment. There is regular bus and railway transport to Provadia.

The Petricha Chalet is 30 km south-east of Provadia and 4 km away from the village of Avren. It offers 50 beds in two suites and two-, three-, and four-bed rooms. Reservations in the Tourist Association in the town of Beloslav. The village has a regular bus connection with Varna and Beloslav. It takes an hour to get to the chalet from Avren if you go on foot, and if you start at Razdelna railway station it will take 45 min. You can use your own car. The historical fortress Petrich Kale is 30 min walk away from the chalet. The Byzantine built 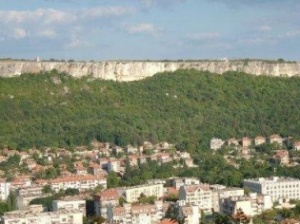 it in 5th-6th centuries. In 1444 Vladislav Varnenchek destroyed it. There is a museum about the history of the fortress. The rocks around are excellent for climbing.

The Lovkata Chalet - a wonderful place for rest, practising of sports and tourism; situated some 10 km east of Provadia and 3 km away from the village of Manastir. The buses of the line Provadia-Devnya halt here. It takes an hour to get from the village to the chalet, and about 2.30 h if you start in the town. The chalet offers 30 beds - one suite and two-, three-, and six-bed rooms. You can walk to the Vulsheben Izvor (Magic Spring) (4 km away) and to the Petricha chalet (1.30 - 2 hour walk). Reservations in the Tourist Association in Devnya.

Seventeen kilometres north-east of Provadia is the town of Devnya - the biggest centre of industrial chemistry in Bulgaria; it sprang up as a settlement near the biggest karst springs.
The springs of Devnya are 30 in number and have a debit of 3670 litres per second with temp. 17-20°C. It is where the Roman settlement called Marcianopolis (after the name of emperor Trayan’s sister - Marciana) sprang up and was succeeded by the present day town.

There is an interesting Museum of Mosaics in Devnya. There is a regular bus line from Devnya to Provadia. Devnya is a railway station on the line Razdelna - Dobrich - Kardam.