Information about the town of Petrich

Petrich is located at the immediate northern foothill of the Belasitsa Mountain, along the banks of the Petrich River. The Petrich field along the Stroumeshnitsa Valley is one of the most fertile lands in Bulgaria.

Due to the Mediterranean influence coming through the valley of the Strouma River a number of citrus fruits grow here - lemons, kiwi, figs, etc., as well as early fruits and vegetables.

Petrich was included in the territory of the Bulgarian State during the reign of Knyaz Boris I (852-889). In the Middle Ages it was a solid Bulgarian fortress of great importance for Tsar Samouil?s wars (997-1014) with Byzantium. Petrich preserved its Bulgarian spirit under the Ottoman rule as well. In 16th century the Christian population was 90%. In the second half of 19th century the town decayed and at the threshold of 20th century there are about 6000 inhabitants.

The town population actively participated in the national liberation struggles of Macedonia. In 1899 a revolutionary committee of the IMRO (Internal Macedonian Revolutionary Organisation) was set up. Petrich was liberated from Turkish rule in the Balkan War (1912-1913). Part of the population emigrated but refugees from Vardar and Aegean Macedonia settled here. During the World War I the town was almost completely destroyed.

There is bus and railway transport to and from Petrich connecting it with the rest of the country. There are bus lines to Sofia, Blagoevgrad, Sandanski, Koulata, Zlatarevo and all villages in the Petrich Field. Petrich is the last railway station on the General Todorov - Petrich extension of the railway line Sofia - Koulata - Athens. There are several bus lines within the town itself. 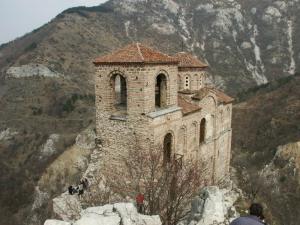 The most significant sight near Petrich is the Samouil Fortress - National Museum. It is situated on 18 km west of the town and 6 km north of the village of Klyuch, on the right bank of the Stroumeshnitsa River. At the beginning of 11th century the Bulgarian Tsar Samouil built a defencive system against the Byzantine invasion in the Klyuch Saddle (between Belasitsa and Ograzhden Mountains). You can use the regular bus lines from Petrich to Zlatarevo frontier checkpoint.

Five kilometres north-east of Petrich you can find remains dating back to the Hellenic epoch (most probably of the ancient town of Petra) - parts of a fortress wall, foundations of public buildings, architectural fragments. Coins dating back to 4-3th centuries BC were discovered. The Roupite Nature Reserve - 10 km north-east of the town. There is a railway station on the General Todorov - Petrich line. You can also see the hot steaming mineral springs at the bottom of the dead vulcano of Kozhouh. This is an extremely beautiful and impressive place. The Bulgarian prophet Vanga lived here and helped the people in her last years. Her house and the St. Petka Church remind us of her.

- a spa 13 km east of Petrich. There are a lot of hot mineral springs with water temperature of 58o-62oC. The water is good for various illnesses. An ancient necropolis of 7th-10th century is situated nearby.

The mountain of Belasitsa - it rises steep south above the town and in fact is its biggest natural park. The biggest area of edible chestnut trees can be found on the northern slopes. The mountain spreads in the territories of three countries - Bulgaria, Greece and Macedonia, and the crossing point of their borders is Mt. Toumba (1881 m), which can be climbed up for 6-7 hours starting at the village of Gabrene (only upon permission of the border authorities, there are no markings). Tourists can climb up the highest peak of the mountain, Mt. Radomir (2029 m) for about 6 hours but only upon permission of the border authorities at the piquet. There are no markings above the piquet.