Information about the town of Lom

Lom is located in Montana region. Situated on the banks of the Danube River at the mouth of its tributary - the Lom River. Located 49 km north of Montana, 56 km southeast of Vidin and 42 km west of Kozloduy.
Climatically, the municipality belongs to the northern climatic region of the hilly Danubian Plain. This area covers the lower part of the Danube Valley, the southern boundary around 30-40 km from the Danube. The proximity of the Stara Planina mountain range and the Carpathians, and remoteness from large bodies of water , affect the climate of the area. Formed under the influence of oceanic and continental air masses from temperate latitudes , the climate is continental with cold winters and hot summers. The average annual temperature is 12,1º C. 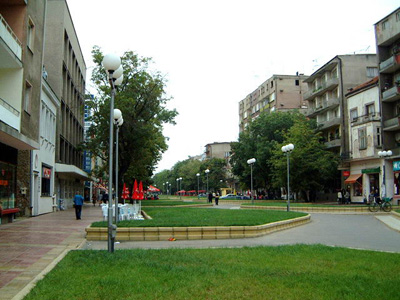 The average winter temperature is - 0,2º C with the lowest temperatures reaching -24º. The lowest recorded temperature is -29,9ºC. Winter frosts are usually accompanied by frequent winds near the town of Lom northwest. The first snow is formed to average 5 to 10 December , and in the years earlier . The average number of days with snow cover is 65 (December - 12 January - 23 February - 19 March - 11). The number of days with snowfall is 21. Characteristically earlier accumulation and later snowmelt . Summer is hot. The average temperature is +22,4º C, and the highest values ​​reach +30 º -40 º C. The highest value measured in summer is 42,3 º C.

Houses in Lom - monuments of architecture
Refined taste, refinement and former welfare broadcast facades of most houses strung along the main street of Lom. Particularly interesting are the spiers, plant motifs, combined with figurative about the tall windows, beautiful ornaments winding balconies. These are 57 buildings declared monuments of culture in Lom Municipality approved by the National Institute - Sofia letter № 6314 from 12.08.1986.The buildings were built in the period from 1880 to 1940. The projects are Austrian, Belgian, German and Hungarian architects' style „late secession" and "baroque". 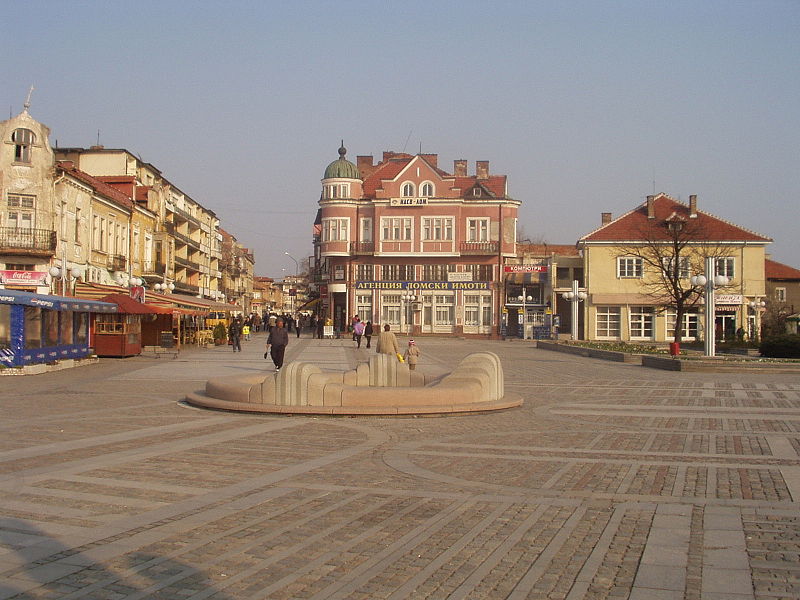 These houses were owned by major trading families owning shops, warehouses and retail stores. They had their own offices in Vienna, Bucharest, Galati, Braila, Petersburg, Odessa and Manchester. These are famous families - Milanesi, Staykovi, Andreevi, Tsenko Todorovi, Tsonzarovi, Tabakovi, Poptodorov, Kusidis, Bechevi and others. Having constructed these beautiful and stylish houses, they displayed furniture from Vienna, beautiful things of Pest and Galati. Impose a style both in the exterior and interior of their homes. They are grown and nurtured many famous personalities in science, music and literature who today live and work in England, France, Germany, Switzerland, Italy and others.
Ancient fortress ALMUS
Almus is located at the present town of Lom. It was declared a cultural monument of national importance in the Official Government Gazette in 1971. Regular archaeological studies have been made during 1986 and 1990 by a team from the Historical Museum Lom, under the scientific guidance of the Association of Science.
Information for Almus contained in the map of Pevtinger, the Roman Empire 's Guide to the Emperor Antoninus, the List of official ranks, the writings of Procopius 'For buildings" and Jordanes - "Getika " Epigraphic monuments from antiquity associated with Almus are included in all prominent buildings of the Latin inscription in Bulgarian lands. Individual archaeological sites have been published of the most renowned specialists in archeology as Bogdan Filov, Gabriel Katzarov, Vaclav Dobruski, Felix Kanitz, Constantine Irechek. Almus is marked on some Western European maps of XVI - XVIII century - Abraham Orteliy, later reissued by P. Kerius, N. Sanson, J. Mathias Haas and Christoph Harenberg.
As a result of regular archaeological excavations of the city were studied 70 meters from the western wall of the castle. It is 2.20 m wide and had a total length of 200 m castle had the form of an irregular pentagon, approximately 250 meters north and 200 meters from the west, east and 220 meters to the south. She had round towers at the corners. Its area is about 4.1 ha. 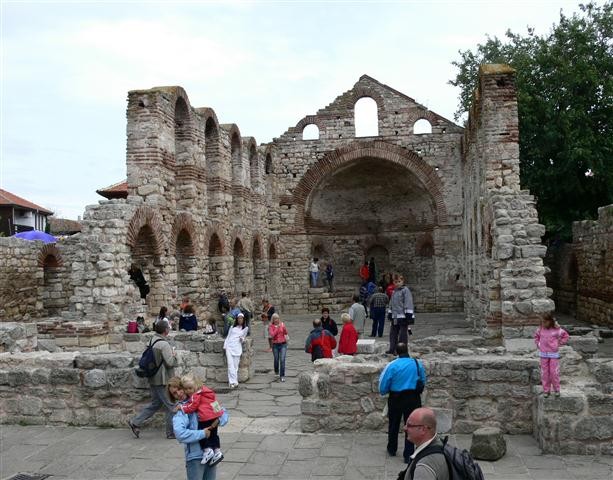 As a result of the excavations were found many artifacts from ancient and medieval times. They are stored in the Historical Museum of Lom and can be exposed in museums or exhibition area adjacent to the excavation. Rediscovered walls and adjacent to these barracks are not restored and preserved. Given their place in the central part of the present town of Lom and their role as a cultural and historical monument of national importance, they may be exposed in the modern urban environment. As part of the European cultural heritage, such monuments of the Roman Empire may also be subject of interest for Bulgarian and foreign tourists.
Road system
In Lom Municipality pass the national road network: II- 11 - Vidin - Lom - NPP and E-79 - Lom - Montana - Sofia. The municipality lacks class roads, the majority, 42.4 km are IVth class (of which 3.3 km are earth roads) 20.1 km are third 52.7 km - second class. Roads provide links areas: Lom - Montana - Sofia, Lom - NPP Lom - Belogradchik , Lom - Slatina - Pleven and Lom - Vidin . Streets in the city length 48,548 m, of which 40,040 meters are paved (82.5%) 2173 meters with cobblestone pavement (4.5%) 3685 meters are paved with cobblestones (7 6 %) and 2650 meters are earth roads (5.4%). All roads in the urban area of the municipality have a durable surface.
Railway system
In the municipality passes 12 km electrified railway line. Lom Station has 17 tracks. Construction of a normal train tracks that connect the station with Lom " Winery Polomie " AD, " Lom mills " AD, " Balkankar River " AD, " Fuel " AD, " Port Complex " JSC and storage area allowing the loading and unloading and inclusion in the national railway network.
Lom Station has a loading and unloading station with two service crane - portal and RDK. In the area of ​​the station wagon there is repair workshop in which repair the damaged wagons (without refurbishment). 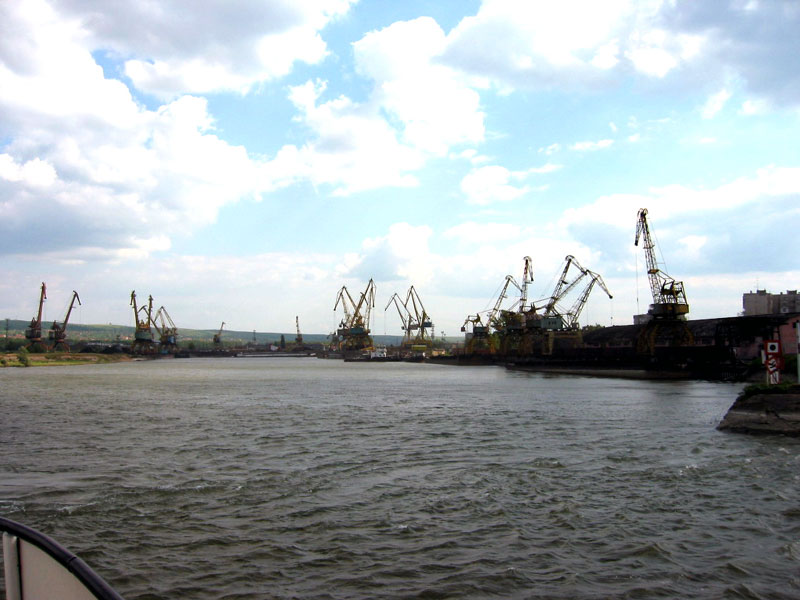 Water traffic
"Port Complex" Lom is located at km 741 +800 to km 743 Danube. Located on 29.9 hectares (including 8.8 ha water area), today it is a multi-purpose port for handling bulk, general cargo and others. It realizes about 40% of the cargo of Bulgarian river ports. The port is provided with adequate road and rail approaches, allowing the processing of ships is done directly and indirectly.
The location of the port and the convenient road links in all directions away from the Danube favorably affects the city, which became an important transport hub in Northern Bulgaria.

History
The city is the successor of the ancient settlement founded by the Thracians by the name Artanes, grown later in the Roman fortress Almus ('29). The fortress suffered during the Huns, the castle was restored and rebuilt by the Byzantine emperor Justinian the Great in the sixth century There is evidence that by the end of XII - early XIII century. Lom was a city with Bulgarian monastery near it. In Hungarian documents from the second half of the thirteenth century it is mentioned Lom fortress, besieged by the Hungarians during their war with the Bulgarians at the time. During the Turkish rule was mentioned as a port town and the name of Lom Palanka.
In the end of the century the Turkish army settled near Lom kale. In the map „European part of Turkey" (1811), the city was named among the "more prominent cities of the main roads". Ottoman documents from the seventeenth and eighteenth century speak of enhanced rebellions movement in the region. In 1850 Lom people take mass participation in Vidin Uprising. In 1872 Vasil Levski arrives in the town. Lom was liberated from Ottoman rule on 27 November 1877.
The importance of the city has increased significantly with the development of navigation on the Danube in the 40s of the XIX century, when ships are directed to the Bulgarian Danube ports. In 1837 in Lom first dock ship of Austria-Hungary, and the following year opened and shipping agency "Imperial and Royal privileged Danube Shipping Company".
"Since then really starts a new history and economic development of the city, gradually established strong links with distant cultures world - Lom star shines" says Dimitar Popov in "Lom -city and county". Being the shortest path along the Danube from Western Europe to Aegean Sea, port and train station, "geography has said it`s word according to Lom" - says Dimitar Popov.
Lom gradually became the main export port for Vienna. Connecting the city with roads for Vratsa, through Berkovica to Sofia, through Ichtiman to Plovdiv and Istanbul etc. had a favorable effect, and contributed to its establishment as a transport and commercial center. Lom enterprising traders traveled to the famous fairs of Pirot, Uzundzhovo and Eski Djumaya, through Lom people traded with Austria, Rumania, Russia , Bosnia. By 1869 it had about 120 stores, 148 retail offices, 175 grocery stores, 34 cafes, 6 hotels, 2 mills. The city was centered on the old Kale, which was entered through the Vidin, Belogradchik, Sofia ports. In 1880 Lom were 7,500 inhabitants.
At the end of the nineteenth century, in 1894 both Czechs Mallothi and Hozman open a brewery in Lom. At the same time they established ceramic and tobacco factories. In 1913 during the remarkable mayor George Manavski was found "power factory". In the early twentieth century in Lom has a bank "Wealth", popular bank in Lom; branches of Sofia banks and those with foreign capital, five limited liability companies and nine representatives of shipping companies. As a result of economic prosperity of Lom many families built homes designed by Austrian, Hungarian, German and Belgian architects style "Late Secession".