Information about the town of Kostinbrod

The town is located 16 km north- west of Sofia in Sofia valley. Two rivers pass through it - in the north of the River Blato, and in the south - Belitza River and two small tributaries of the Iskar River.
According to the legend Kostinbrod was founded by a man named Costa , who long ago settled to the ford in the river Belitza (now at the entry into the city from Sofia). There he made a roadside pub and the place became a favorite for many traders arriving in the capital. People began called it Kostinbrod, instead of "the ford of Costa".Latelywas formed village Kostinbrod. Today, the center of the village was located east of Lom road. Quite close is also Shiyakovski monastery where Vasil Levski founded a revolutionary committee.
Over the years, the idea of socialism was Kostinbrod to become a big city. So the village was merged with the neighboring villages Shiyakovtsi and Maslovo (now neighborhoods of the city). People from mountain villages in the area are also settled in the new town. Even today, starting west of Lom road at the junction "Belitza" towards the neighborhoods "Shiyakovtsi" and "Maslovo" must be driven about 4 km by road on which two sidesthere are several rows with houses.
Neighborhood "Maslovo" occupies the northwestern part of the city, between the district "Shiyakovtsi" and village of Petarch. There is a stadium and a lake.
Over the years Kostinbrod is known as the city with the utopian ideas of the Communist Party of success in poultry and livestock. In the vicinity of the municipality are Institute of Poultry, Poultry, Livestock Institute, hybrid centers. Earlier here was the largest of the Balkan Peninsula Institute of berries. Under the patronage of Todor Zhivkov was created one of the largest of its time institute called Institute for grain and feed industry, which today is in critical condition. In 1990 -s many other institutes of businesses were developed.
The cooking oil "Niva" is perhaps the most prominent element, with which in the years of socialism made Kostinbrod Municipality so proud. There is hardly a house in Bulgaria, that doesn`t remember the famous production of state-owned "Georgi Dimitrov" factories. Since the beginning of 1930 -s the factory has consistently been among the top five taxpayers of the Treasury in the Kingdom of Bulgaria, with an annual turnover of over 1 billion lev (for comparison - in those days a very large and luxurious apartment in the city center costs about 200 000 lev). The factory is the largest source of foreign exchange earnings in the Kingdom, especially in terms of British pounds and U.S. dollars, and is not surpassed even after 30 years,  when very popular became export of tobacco for Germany. Production (mainly food and lubricants, fertilizers, soaps, cosmetics) with very high quality has been designed primarily for foreign countries - neighboring countries, Europe and even the United States and Japan. Production fully meets the domestic needs, but it should be borne in mind that at this time they are not that great , and some of the products are mass produced and elsewhere in the country - in small businesses or home. Unfortunately, with the advent of communism, the factory was nationalized immediately (in these years ruled by the descendants of Nichola Chilov), and he was posthumously condemned with the classic "wealthy - eaten, vile exploiter of human labor". Further industrialization of Bulgaria takes place we know only too disastrous way - the development of metallurgy and chemicals based on imported raw materials and creating environmental problems. 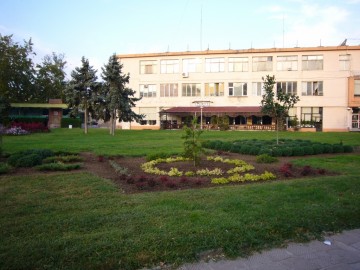 In 1959, the city has built one of the most powerful of its time short wave radio station which broadcast today programs of the Bulgarian National Radio abroad. The radio works today and in 2001 was the first radio station in Bulgaria, began the introduction of digitization of the airwaves with the launch of regular digital broadcast via short wave transmitter modernized by company Space Line.
Because of its proximity to the capital, after 1990 the town established itself as a good place for investment. The largest factory built is that of Coca-Cola, on an area of 120 acres. Built was also packing coffee factory "Nova Brazilia", factory "Olinesa” and many shops of smaller firms. In the June 2007 was released and most modern poultry processing plant in Bulgaria.
The unemployment rate is lower than the national average, due to the working industry and proximity to the capital. In Kostinbrod before 1990 there were 7 agricultural research institutes. On its territory there are over 17 small and medium enterprises in the food industry, the private sector has entered aggressively in municipal government and the local economy.
Typical of the local population is growing highly productive animals. The main crops that are sown in the municipality are: wheat, barley, peas, corn, sunflower, potatoes and a number of other vegetables.
Kostinbrod is famous for its mineral waters since Roman times. South of it in the suburbs is situated the ancient Roman road to Constantinople. In the area of ​​spring today across the Coca-Cola factory, there was a Roman bath, whose remains are still visible today.
In Kostinbrod has two unique ancient monuments - the late Roman Residence Skretiska (palatium Scretisca) of Constantine the Great and Road station Skretiska (Mutatio Scretisca). In ancient times this area was beautiful and fertile near the hot mineral spring and an important road to the right bank of the river Belitza, a tributary of the River Blato. 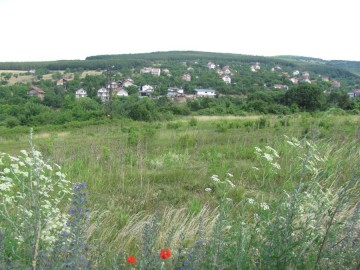 There are many reasons that researchers refer to accept that Skretiska Residence as the preferred location for the residence of Constantine the Great during his visits in Serdica and that it occurred precisely as imperial residence, among which is that the years of construction and coincide with the beginning of his long stays in Serdica and is well known his famous phrase "Serdica is my Rome". Probably the residence is maintained by the Governor of the Province of Serdica (today Sofia). Not excluding the possibility palatium /praetorium Scretisca be used by bishops delegates Council of Serdica.
The main architectural complex of the residence - palatium Scretisca is one of the most impressive examples of representative of the late Roman residential architecture (141/110 m). The total area of ​​floor mosaics found in the northern peristyle exceeds 1000 m2 and the total length of the peristyle and the outer south portico is more than 400 meters. Road station Skretiska "for the residence" is located 1000 m has occurred probably for its service primary purpose inn with several rooms and a courtyard. Early Byzantine fortified settlement Kratiskara (ΚΡΑΤΙΣΚΑΡΑ) saved with minor changes the name of the Roman residence and the name of the Roman station Scretisca, and in its construction are reused remains of an earlier residence. Occurs probably in the second quarter of the VI century AD. It was mentioned in the sources of Procopius as πολιχνιον (town) ΚΡΑΤΙΣΚΑΡΑ, the remains of Roman residence and acts as a local administrative center. Life probably interrupted at the Slavic invasions in the VI century AD. There are preserved valuable evidence for fortification system, construction, castle towers, residential and guard rooms.
Based on the favorable geographic conditions, the potential economic and investment opportunities approved social and cultural traditions to ensure balanced and sustainable perspective development of the municipality Kostinbrod through efficient and rational use of available resources and potentials and gradually overcoming internal municipal imbalances including mitigate the contradictions "center - periphery" in order to create favorable socio- economic and living environment for the development of effective and low medium-sized businesses.
Favorable spatial location and importance of Kostinbrod municipality is determined by its proximity to Sofia /distance 16 km/ crossroad its position /strong influence of the three European transport corridors, two of them within the municipality relatively good and normal functioning traditional economy.
The municipality is below the national average in terms of size and population density is close to the average for the country /69.7%/. Kostinbrod municipality is integral within the municipality Sofia region and the group of municipalities with performance on average for the region and the country.
Northwestern part of the Sofia Valley, where the municipality is located , is a trough valley. Sofia field is surrounded to the north by the slopes of the Stara Planina Mountain, south of Vitosha and Lyulin, west leads to the limestone hills of Slivnica and Dragoman. The relief in the north is mountainous, heavily indented. Includes parts of
Minor mountain - part of West Stara Planina. The highest point is about 1155 m (north of Chibaovtsi village). In the southern part of the municipality relief is flat and hilly. The average altitude height Sofia field 550 m.

The climate of the municipality is continental. The average annual temperature in the city Kostinbrod is 9,9 º C, average annual rainfall - 600 mm.
The soils in the northern part of the municipality are mainly leached forest and brown forest. In southern - bottom of the former huge lake, the soil is more fertile prevail alluvial and alluvial -meadow soils and leached chernozem vertisoils.
In the municipality the rivers are Blato river, Slivnishka and  Belichka. There are several small tributaries of the Iskar River, the largest of them forms a short but deep gorges with beautiful rocks. In the western part of the mountain there highly developed karst soils. Rainwater is lost in many caverns and give rise to many karst springs.
The total area of Kostinbrod (254.4 thousand decares) is below the average for municipalities in the country (420.5 thousand decares) in the South West region (390.5 thousand decares) and Sofia region (321.0 thousand decares). The population density is 69.7 d/km2 - close to the national average (70.7) , but somewhat lower.
The scope of the municipality includes 14 settlements - one city Kostinbrod - administrative center of the municipality and 13 villages. Since 2003, the territory of the municipality six municipalities - Petarch Dragovishtitsa Golyanovtsi, Gradec, Chibaovtsi, Opitsvet, as they are directly elected mayors of the population.
In the Plan for Regional Development of Sofia Kostinbrod municipality includes the group of municipalities (10 - Kostinbrod, Svoge, Pravets, Slivnitza, Bozhurishte, Kostenets, Dolna Banya, Mirkovo, Godech, Koprivshtitza) with not very high capital accumulation, but with good potential for tourism development, agriculture and industry. Adaptability of accumulated capital in the municipality is high, unemployment is below the national average, and the amount of investments in the private sector of the local economy is high. Level of socio-economic development of the municipality is close to the average for the area.
Specific initiatives to achieve the objectives of the regional plan for regional development of Sofia region, including common Kostinbrod is the construction of the European transport corridor № 4 ( Vidin / Lom -Sofia- Tower ), which will contribute to the economic, social, and cross-border infrastructure revitalization the area of Kostinbrod municipality and municipalities Svoge, Godech, Slivnitza, Dragoman and Bozhurishte. The project is of national and inter importance since realized the purpose of the regional plan "Cross-border cooperation and development" and solve the problem in the field of infrastructure and market relations.