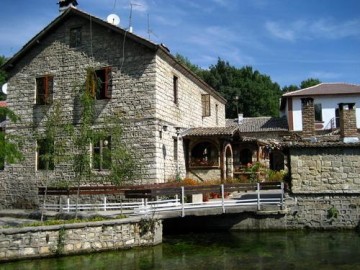 The territory of the municipality is 100.980 sq.km. Devnya is located in the North - East Bulgaria and is bordered by the lands of Aksakovo, Beloslav, Avren, Provadiya, Vetrin, Suvorovo municipalities.
Devnya is located about 30 km from the city of Varna in a small valley, surrounded from all sides by low limestone hills, the last slopes of Stara Planina Mountain and the Dobrudja plateau, open only to the east Beloslavsko lake, and hence to the sea. Natural Monument in the valley are the thirty karst springs, of which the most picturesque is the "Magic Spring" associated with ancient legends. The presence of abundant water and limestone deposits - an inexhaustible source of building materials, attract people to this part since ancient times. Richest sources of water, salt and limestone are the basis for the development of large scale industry. 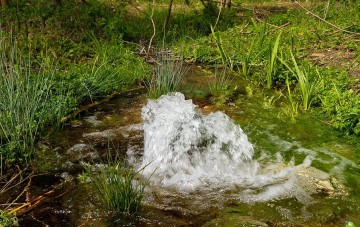 Devnyan springs
Devnyan springs are located at the beginning of Devnya River. These are the biggest karst springs in Bulgaria. The springs are about 30 in number and are grouped in seven spring groups.
The most watered from all sources is called Dipsiza. It forms a massive lake that was once covered with pretty plants, but is now it is cleared and tourists can enjoy its beauty up close, sailing boat in its waters. At some places from the bottom of the lake is gushing crystal clear water which temperature is about 18 degrees. The spring is called “Bottomless”. Its waters power large mill located at the southern end of the spring.
The most beautiful among Devnyan springs is the small Havuz, called the Magic spring. Around it was built elliptical wall, about 4-5 meters high which creates water falling used by the nearby mill. At the bottom of the fountain and on the pool walls there are beautiful colorful long and thin algaes. According to ancient legend, this spring was the favorite place of Marciana, sister of Roman Emperor Trajan. So they also call the spring Marciana.
East of Havuza almost in one line are located a number of springs “Ludetinata” (Delidushka), Adata and Suyutliyata. The beautiful spring “Ludetinata” formed a lake about 35 m wide. The main throat of the spring is located at the eastern end of the basin and forms a powerful underwater fountain. Adata spring has diameter of 40 m and forms two pools associated with a channel.
In the most northern part of the Devnian spring at the foot of a limestone wall called the "Great Kayrak" is gushing the spring called “The Eye”(Bashgyoz) and Halkaliyata. The waters of these springs merge with the waters of the river Chernevska. 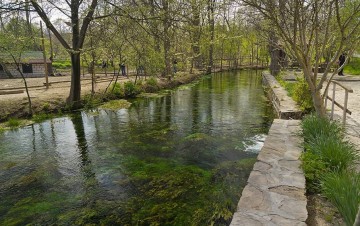 The water of the springs does not freeze during winter season. Its size is influenced slightly by the seasonal climate changes. Every second of the springs is gushing up to 3500 liters of water. It forms larger and smaller streams that form the river called Devnya.
The rich resource of the Devnyan springs has been used since ancient times when near the lakes existed significant Thracian settlement. Near the springs were discovered the foundations of an old fortress. There was found large coin treasure - 263 species of silver and gold coin. It is kept today in the museums of Sofia and Varna. The rich waters of the springs are still used today for many mills and some plantslocated nearby.
The great natural wealth and beauty of Devnyan springs attract many tourists.
River Devnya
River Devnya occurs during Ottoman times about Devnyan springs as Vodenicharsko area. For the first time it was mentioned by the Catholic Bishop Petar Bogdan. In a report of 1640 to the Congregation for spreading the Faith in Rome, he wrote that the river Devyna had 25 mills, each worth five or six thousand scudi, all owned by Turks. In 1652 the Turkish traveler Evliya Chelebi notes that in this area there were forty to fifty large mills, each of which cost more than one zaimlik and that the population of Dobrodzha and Deliorman used to come here to grind their food. Devnyan mills are mentioned in a document from 1774 (during the Russian- Turkish War from 1768-1774), which surrounded in the fortress of Varna Turkish soldiers and officials asked the Sultan for help and protection. On April 24th 1829 Victor Teplyakov, clerk  at the office of the Newrussian and Bessarabian Governor, saw 24 mills, all destroyed probably during the war. 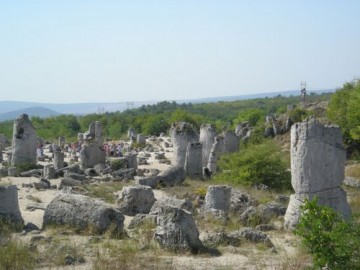 “Pobitite kamani”
Pobitite kamani (Stone Forest) are rock formations located on both sides of the road Varna - Sofia and near Devnya. It is an area that represents natural stone columns with strange shape reaching up to 6 m in height.
Several rows of stone columns create the impression that they are assembled by two cones just hooked to sharp peaks. Very attractive is the group of columns that look like fossilized animals or frozen waterfalls. Some of them reach essentially up to 12 meters wide.
The prevailing theory "stone forest" near Devnya was formed 50 million years ago when the area was part of the sea. After the withdrawal of water, inorganic deposits on it eroded, acquiring its present shapes.
Museum of Mosaics in Devnya
Museum of Mosaics in Devnya presents Roman and early Byzantine mosaics Marcianopolis. The idea of ​​its creation was born in the course of the archaeological excavations, which begun in 1976. In these studies were revealed many late Roman buildings with mosaics (villa urbana).
The museum was designed by the architect Kamen Goranov on the ancient foundations of the building. It was built at the end of third- the beginning of fourth century (during the time of Constantine I the Great) at the site of an earlier building that was destroyed during the Gothic invasions in 250-251 year. With repairs and renovations the building existed until the seventh century. 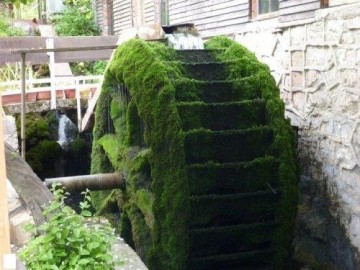 The building occupies a whole city quarter with the length of 37.15 m (north- south) and a width of 37.75 meters (east- west). Around an inside courtyard (atrium) (11,11 x 5.87 m), paved with stone, with a large well in the middle (diameter 0.76 m), surrounded on three sides with covered gallery with limestone colonnade (peristyle) (92.63 sq. m), are located 21 residential,farm and commercial warehouses with a total area of ​​1402 sq m.The housing walls were covered with colorful murals and figures from plaster. Five of the rooms of the building and floorswere covered with colorful mosaics - one of the best examples of Roman mosaic art from that period found in Bulgaria.
Three of these mosaics are displayed in the museum on sites where they were found, and the rest after conservation and partial restoration are transferred to a new carrier base.
The mosaics were made in the classical opus tesselatumtechnique and opus vermiculatum - of small stones - cubes made of marble, limestone, clay and colored glass in 16 colors. They represent the main characters and scenes from Greek and Roman mythology, exotic animals and birds, floral and geometric motifs.
Foundation "Marcianopolis"
Foundation "Marcianopolis" based in Devnya is a legal non-profit entity under the Act for non-profit making organizations, established in 1998 and is the only non-governmental organization in the municipality Devnya. Chairman of establishment until now, Mr. Dimitar Dimitrov, currently member of the 40th National Assembly and the Executive Director - Varna lawyer Alexander Asenov.
The main objectives of the Foundation are:
To assist in addressing and solving environmental problems and the implementation of the principles of sustainable development, and to support the integration of international initiatives in the field of environment and sustainable development;
Promote the construction and operation of environmentally friendly economy and environment, in line with international standards and to support technological development and implementation of environmental and new technologies to ensure rational use of natural resources, protection and restoration of the environment and sustainable socio- economic development;
Encourage the development of environmental saving culture and education and assist in the formation of individual and social environmental consciousness;
To support sustainable development of the region Devnya, helping to ensure a favorable environmental and social development, occupational health and recreation for people of the region.
Association for disabled people
Recruit and organize members and supporters;
Examine the problems of the disabled and urges the relevant authorities on how to solve them and participate with experts in the development of various documents;
Develop and implement programs for employment, social and communicative rehabilitation of the disabled;
Performs other related activities and seek ways of financing them;
Cooperate with the competent state and municipal authorities and organizations to improve education and training of disabled people;
Creating the conditions for qualification and career development;
Intellectual development - creative, sporting and tourist activities of its members;
Working to improve the health, social, cultural and community services to its members;
Supports targeted needy disabled, and for this purpose draws the necessary financial, material and human resources;
Works to overcome architectural - construction, transport and communication barriers and limiting conditions of trauma and debilitating healthy people;
Provision, upholding and protecting the interests of disabled people to the state and municipal authorities in the country and abroad;
Support individual and group levels of social, occupational, medical and domestic rehabilitation of the disabled;
Assist the society and its structures for the perception of disabled people as equal members of the society. 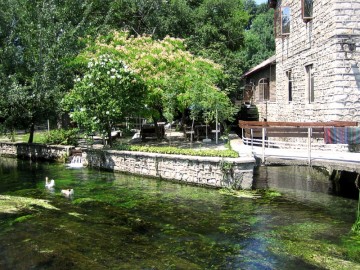 History
Marcianopolis
Marcianopolis, the remains of which lie beneath the foundations of the square of the River Devnya , takes its name from Marciana (in some sources mentioned as Marcia) - sister of Emperor Marcus Trajan (98-117). In the inscriptions of the Praetorian found in Rome, the city bears the name and the surname of the Emperor - Ulpius (Ulpia Marcianopolis). In latin inscriptions the name of the city is mentioned as - Marcianopolis, civitas Marcianopolitanorum, often a shortened Greek inscriptions - Markiano(u)poliz and others. After the settlement of the Slavians and the pre-bulgarians in the present northeastern Bulgaria in the first decades of the VII century the city name disappears from the historical sources, but church- administrative division, it remains traditionally to present times.
Marcianopolis was located in the northwestern corner of Devnya Valley. Along with the necropolis town extended on both sides of the river Devnya - from springs in the north to the area “The white mounds” and south from the Tabia to Kabata on the east and to the “Bitter fountain” on the west.