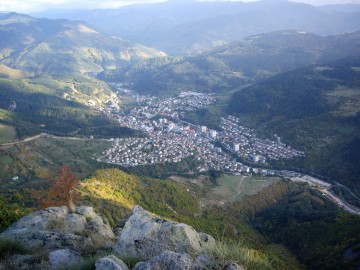 Devin municipality is located in the southwestern part of the Rhodope Mountains along the Vacha river and borders the municipalities of Smolyan, Borino, Batak, Krichim, Perushtica and Chepelare and on the south - with Greece. Devin municipality is one of the ten constituent municipalities of Smolyan and has an area of 575 sq.km. Occupies the northwestern part of Smolyan.
The municipal center town of Devin is located in Devin mountain 710 meters above sea level, in a small valley about 2 km west of the confluence of the Danube and Devinriver and Vacha river. It is surrounded to the south of Devin Mountain, northwest of Mount Grebenets and east slopes of Chernatitsa. It is 45 km northwest of Smolyan and 220 km from Sofia.
The population of the municipality of Devin numbers 13,580 people, of which 7128 live in the municipal center Devin. The Municipality consists of 16 settlements, one town and 15 villages - Beden, Breze, Vodni pad,Grohotno, Gyovren, Zhrebovo, Kesten, Lyaskovo village, village of Mihalkovo, Osikovo, Selcha, Stomanovo, Teshel,Trigrad , Churekovo.
The relief is mountainous with steep and inaccessible places, slopes and deep ravines, sloping to steep ridges. The climate is continental and is characterized by lower summer temperatures and heavy rainfall. The municipality is rich in water resources: karst springs, rivers, reservoirs, and hot springs with water temperatures of 16 º to 76 º C in the deposits of "Bedenski bani" to village of Breze; in Devin (water with good drinking quality); village of Mihalkovo (naturally carbonated water carbonic - dining and treatment), in the area of "Posestra" and in the quarter of  "Nastan". 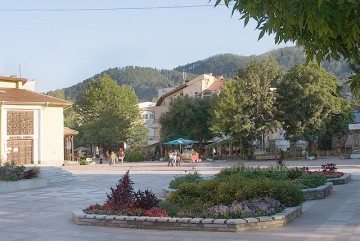 Devin municipality falls in the mountainous climate. Relatively high altitude and very rugged terrain and the mountains and hills prevent the penetration of Mediterranean climatic influence.
The climate is characterized by low temperatures, a small amplitude and in annual abundant precipitation. Average annual temperatures range from 4 0C for the highest parts of the region to 8 0C for lands of the lower region. The lowest temperatures are recorded as minus 18 to minus 20 0C, and the highest from plus 30 to plus 32 0C, annual rainfall ranging from 650 mm to 800 mm. Which is characterized by that amended total annual rate, which translates into an increase in winter precipitation that falls on the high places earlier and snowfall persist until mid-spring. Here autumn is warmer than spring, and maximum temperatures are late in June and in July and August. Such a delay and minimum temperatures occur in January instead of entering in February. Not excluded temperature depression, which are often a surprise for visitors to the mountain and agriculture. 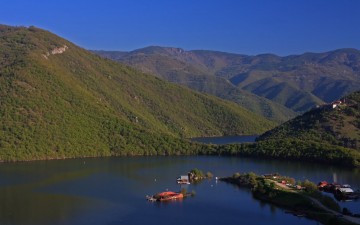 Highly cut relief, small indoor mountain plains and opens the north valley of Vacha river significantly affects the nature of the winds. In most cases is prevailing calm weather. Winds and relatively strong occur in December, January and February, when accompanied by severe blizzards that cause the formation of snowdrifts. Often occurs so-called "white wind" with fyon character that warms the weather and causes intense snowmelt. Southwesterly winds blow mainly to the influence of the broken terrain undergo significant changes.
Interesting are the observations of rainfall, which vary depending on the altitude. The average annual rainfall in the lowest parts is about 272 mm less than in the higher parts. This is due to the large difference in altitude and the precipitation of the so called shade. The maximum rainfall is in May and June and the minimum in September. The average date of the first snowfall in Devin is November 29th, and ending date of snow-retention is April 18. Most snow there is in December, January and February, depending on which is the thickness of the snow cover, respectively, 2.8 cm in December, January - 4.2 cm and February - 3 cm. With increasing altitude increased snowfall, the duration of snow cover lasts. During the spring months, and often in the summer are not excluded sudden rains that may surprise unprepared mountain hikers.
In this enchanting and alluring area come to enjoy the fresh air, beautiful scenery and quiet many tourists. Devin is the place where you will feel amazing nature with combination of magnificent mountains, rivers and springs. 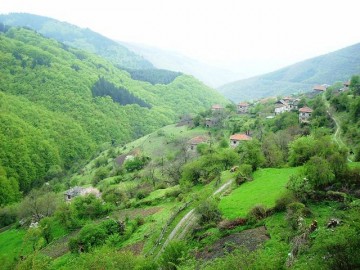 Natural resources are a good prerequisite for the development of alternative forms of tourism. Very attractive for visitors is a protected area the river Devin. It is a picturesque gorge with characteristic landscape and spectacular rock formations and habitats of rare and endangered plant and animal species, which arguably are leaders among edemits is the Rhodope goat. The river has created numerous beautiful pools and meanders, reaching a depth of 2-3 meters. To facilitate the access of tourists to the protected area is built trail "Struilitsa - Kale - Luka", which is very attractive and includes metal bridges, stairs and recreation. In the protected area is a separate area for fishing with a length of 3 km which provides excellent fishing for trout.
In the "Kaleto" area are the ruins of an old Bulgarian fortress VI - XIII century, and in the area "Lukata" was found medieval village. Both sites are registered as monuments of local importance and are under special protection.
Outdoor swimming pools "Struilica" attract many visitors during the tourist season. A therapeutic pool, steam bath, sauna, Jacuzzi, and about 30 minute transition from the parking lot are terraced waterfalls "Struilski dol". 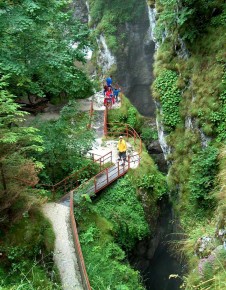 Areas "Lisichevo" and "Chural" located 15 km northwest of Devin. The picturesque scenery and convenient asphalt road from Devin are factors that determine the "Lisichevo" as a favorite place for recreation for citizens and visitors .
Unique to itself and protected area "Trigradsko Gorge" located along the “Trigradsko zhdrelo” on the road from Devin to Trigrad, about 1.5 km from the village. The protected area covers the most picturesque part of the river canyon with sheer walls up to 300 meters, areas that are close to each other hanging over the road, shielding the sky. The majestic views of the cliffs on which grow pine, attaches particular value of this magnificent natural monument.
One of the phenomena of Trigradsko Gorge is the cave "Devil's Throat"- Dyavolskoto garlo. Waters entering Trigradska river thundered into the cave where they form 12 underground waterfalls, the largest of which has a height of 42 meters /one of the highest in Europe/ and reappear after 530 meters as impetuous karst spring.
There are many legends for cave "Devil's Throat" and locals tell it, like there is nothing that has entered into the underground labyrinth got out of it. Interesting is the legend that says that the Thracians thrown into the abyss their chiefs, to make them immortal. According to another legend, this is where the mythical singer Orpheus descended into the underworld to seek his beloved Eurydice.
In the land of village of Trigrad is Haramiyska cave, which is also the abyss type and provides attraction on the border of classic and extreme tourism. In recent years, the protected area "Trigradsko Gorge" is an increasingly popular place for the development of alternative forms of tourism, visiting caves, hiking, bird watching and plants, mountain biking, horse riding, rafting and more.
Extremely attractive place for tourists and protected is area "Chairite". It is a landslide lakes, ancient forest and hay meadows, located at 1600 meters altitude. Here are some exceptional natural phenomena Prevaletiyat stone - natural stone arch over 10 meters high, “Drunk forest” with its trees, oddly skewed and tilted by landslides layers upon which they grow. Most precious and unique natural phenomenon in the region are arguably 7 landslide lakes retained by the Quaternary period.
Valuable for the development of tourism and spas are: "Bedenski bathrooms" - located 12 km from Devin with temperature from 73.50 to 76.00 C. The mineral water is used for external treatments. The main profile of use includes diseases of the locomotors system, gynecological diseases and skin diseases. Water is not suitable for bottling.
Field "Devin" - located in the town of Devin, at 37 - 45 ° C has the following purposes:
- Use for drinking - gastrointestinal disorders; liver diseases, renal and urological diseases, endocrinological diseases.
- For external use - for diseases of the musculoskeletal system, nervous system, reproductive system, cardiovascular system and skin diseases;
- For inhalation - in respiratory diseases of inflammatory, allergic and toxic nature;
- For sports and prophylactic purposes and hardening in the indoor and outdoor pools.
Field "Mihalkovo" is the deposit rate 2.8 l/s Water temperature rises from 16.00 to 26.00 C. It is most carbonated water carbonic country. Favorable is for the treatment of cardiovascular diseases, diseases of the digestive system, the nervous system and for the treatment of endocrine and metabolic diseases.
Deposits "Nastan - 1" and " Nastan 2" - located in the district Nastan in town of Devin. Water is sulphated, hydro -sodium and is used for:
- drinking, balneotherapy and balneoprevention - gastrointestinal, kidney - urological and endocrinological diseases;
- drinking purposes as natural mineral water - the water source or bottled form, including extremely gassed. 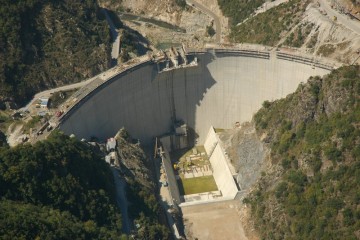 There are two spa treatments and a holiday village in the town, offering spa, mud, paraffin mud treatment, physiotherapy. In the municipality there are six family hotels with a total bed capacity 86 beds, private rooms and guest houses -276 beds. Bungalows - 1 -30 beds, 4 huts - 165 beds. Devin is becoming more and more popular as a spa resort of national and international importance.
Devin is suitable for recreation in all four seasons of the year, but what will remain unforgettable for the visitor is the warm hospitality of the locals and residents of the region and the opportunity to taste the pure and natural delicacies and specialties.
The favorable geographical location of the Devin region attracted settlers from most ancient times, as evidenced by numerous archaeological findings and historical monuments found during surveys and excavations carried out within the city and region. Collected materials and other documents laid the foundations of the historic museum collection in the Devin museum in the exposure are stored about 2000 exhibits of local and national significance, revealing the ancient history of the region. Archaeological finds from the caves "Yagodinska", "Gorni Raj" and "Haramiiska" (Trigrad) show that people had lived here since the early Neolithic. Discovered chromium, charred corn, various tools of bone, pottery are associated with the Thracians. According to archaeological research since Thracian times there was a settlement here with Thracian name. 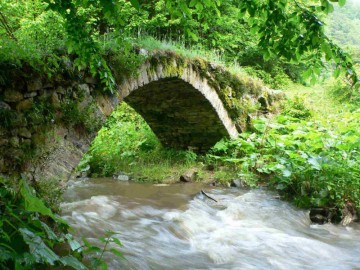 In Devin were found many carpets of Roman rule, Slavic graves, etc. During the excavations in the center of Devin is an open - medieval necropolis from XIII- XIV century. The found objects were stored in museum collections, bronze and glass bracelets, rings and pottery, which proves that there was a medieval village.
Exciting pages chronicle the construction of the city and the region, the heroic history stored in the exposition of the museum continues to maintain our sense of national pride and patriotism. This is indicated by the strong words written in the book of impressions not only by Bulgarians but also by foreigners who visited the town.