Information about the ski resort - Bansko

The town of Bansko has 9134 inhabitants and is 925 m above sea level. It is situated by the Glazne River, the right tributary of Mesta, at the north-eastern foothills of Pirin beneath the highest and most beautiful karst part of the mountain. Its name is related with the ancient Bulgarian word ban (from boean, boyan) which means master. It is 160 km south of Sofia, 60 km south-east of Blagoevgrad, 6 km south of Razlog and 51 km north of Gotse Delchev. Bansko is the entrance to the most beautiful Bulgarian Mountain - Pirin and one of the biggest winter resorts in the country. If one add to this its architectural and historical value, Bansko is a pearl in the Bulgarian necklace.

The town rose up on its present location around 9th-10th century, after the formation of the adjacent quarters of Bansko. In the middle of 18th century Bansko was a big and rich settlement developing crafts and trade. The caravans of Bansko traders travelled to the Aegean to Middle Europe transporting tobacco, poppy seeds form Serr, cotton, processed skins, precious goods, gold. Bansko lived its Golden Age in the second half of 18th century and the beginning of 19th century when it reached economic and cultural boom - the Bansko School of Art was established at that time. The representatives of this school introduced lots of secular and historical themes in art. Monastery schools and a mutual school were opened. However, the Napoleon?s Wars against Austria and the opening of the waterway along the Danube River put an end to its growth. In the middle of 19th century the economy of the town suffered decay. According to the resolutions of the Berlin Treaty Bansko was left within the boundaries of the Turkish Empire and its inhabitants actively participated in the consequent rebellions - Kresna-Razlog Uprising (1878-1879) and the Ilinden-Preobrazhenie Uprising (1903). The town was liberated from the Turkish rule on 5th of October 1912 (the Balkan War). Bansko is the native place of the titans of Bulgarian Revival period Paisii Hilendarski and Neofit Rilski. 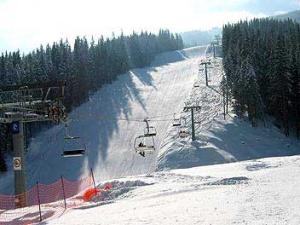 First of all is the Sveta Troitsa (St. Trinity) Church (the biggest and the richest in the region of Pirin), its construction was completed in 1835. The church strikes the viewer with beautiful frescoes and woodcarvings made by Master Ousta Velyan Ognev. The most outstanding representative of the Bansko School of Art - Dimitar Molerov, painted the icons. The size of the temple is impressive - too big for that time. A thirty-metre high stone tower rises up in the yard of the church (built by Master Grigor Doyuv in 1850) with a belfry and a clock made by Todor Hadzhiradonov and installed in 1869. It is located in the centre of the town behind a high stone fence. The Holy Virgin Church built in 14th century and restored at the end of 18th century and the beginning of 19th century has a wonderful woodcarved iconostasis. The native house of Neofit Rilski - preserved in its initial outer appearance and known as the Benina?s House. It is located by the neighbouring St. Trinity Church at 17, Pirin Str. The native house of the poet Nikola Vaptsarov ? in the centre of the town, on the square of the same name. The Velyanov?s House - a monument dating back to the Revival period; one of the most beautiful houses having a rich fresco decoration and fine woodcarvings. The Sirleshtov?s House is a small fortress. The special role of this house in Bansko is evidenced by the one-metre thick stone walls, the narrow and dark loop-holes, the iron bars on the windows and the heavy doors. The Todev?s (Buinov?s) House is an illustration of construction mastership and the delicate sense of beauty in everyday life. It was built in 1835. Bansko House of Culture and Art Gallery. A monument of Father Paisii Hilendarski in the centre of the town at the place of his native house.

As one of the biggest resorts in Bulgaria, practically Bansko offers unlimited opportunities for accommodation, satisfying visitors of different financial status. The tourists have at their disposal more than 40 private (predominantly family-type) hotels and more than 100 restaurants and bars. 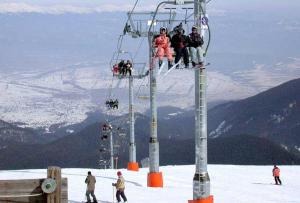 The basic type of transport that connects the town to the rest of the country is the bus transport. There are regular bus lines to Sofia, Blagoevgrad, Gotse Delchev, Razlog, Dobrinishte and many other villages in the district. The bus station is modern and spacious. It is located in the eastern end of the town on the main road Sofia-Blagoevgrad-Gotse Delchev, by the railway station. Bansko is the last but one station on the narrow-gauge line Septemvri-Velingrad-Dobrinishte.

Of the surrounding natural resources most impressive is the legendary Pirin Mountain. The greater part of the tourist flow heading for the mountain goes through the town. In the immediate vicinity are the Chalin Valog Ski-Centre, the Shiligarnika Ski-Centre - one of the biggest in Bulgaria, Demyanitsa, Bunderitsa and Vihren Chalets as well as the highest Mt. Vihren.

6 km south of Bansko is the village of Dobrinishte (final station on the narrow-gauge line from Septemvri). It is one of the largest villages in the country with a population of over 3000 inhabitants. 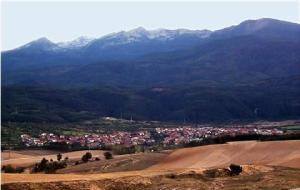 There are 17 mineral springs with water temperature between 30o and 43 oC, as well as a big mineral public bath. The village is a point of departure to the Gotse Delchev, Mocharata and Bezbog Chalets and to the Bezbog Ski-Center. There are a number of private hotels in the village as well as a Tourist House. There is a bus line to Sofia, Blagoevgrad, Razlog, Bansko, Gotse Delchev, etc. The bus station is near the railway station, about 1 kilometre east of Dobrinishte.

Of great interest are the following sights: the Basilica and the Necropolis in the Shipotsko Area; Bansko karst springs in the area of Murtva Polyana; a ceramic workshop dating back to late antiquity; the Stana Kale Fortress of late antiquity and a necropolis, a Thracian fortress and necropolis together with early Christian basilica in St. Nickola Area; Thracian mound in the area of Lisicha Mogila; the Birth of the Holy Virgin Church.