Have a look at our new advantageous suggestion!
It is a regulated plot of land located in the foot of the picturesque Rila Mountain.
The land is situated in a well organized village 12 km away from the town of Samokov, 70 km from the capital Sofia and just 15 km from the famous ski resort of Borovets and its ski tracks.
The size of the plot is 1837 sq m and it is in the regulation of the village. The access is an easy one-through a dirt road. There is electricity and water available in the neighbouring plot. The piece of land we offer you is suitable for building a luxurious house or villa for permanent living or investment. There is a building permission, given already. The density of building is 60%. The plot is situated on the highest part of the village and you can enjoy a fantastic panorama from there.
Do not hesitate to buy this piece of land-it is the perfect investment opportunity! It is worthy having a property with such a favourable location. Take advantage of this offer-it is right for you!

We offer to your attention this great house located in a picturesque village in close vicinity to the ski resort of Borovets. The house has two floors. The first floor comprises of a living room with kitchen and a dining area. The kitchen is fully equipped with brand new washing machine, new dishwasher, built-in stove and a great wooden dining table with 6 chairs. The second floor consists of a large separate bedroom with its own bathroom and toilet. Next to it there are two smaller bedrooms with shared bathroom and toilet. All bedrooms are fully furnished. Besides the above-mentioned premises, the house benefits with a great sauna, and a large basement of 59 sq m, which can be arranged as two more bedrooms or something like a living room with dining area. The village is well known for its beauty and the surrounding nature. The settlement has preserved the authentic atmosphere of the typical Bulgarian village. The popular ski resort of Borovets is only 14 km away, the town of Samokov with all amenities and entertainment is at 10 km, and the capital of Bulgaria - Sofia - 70 km. The house is part of a closed-type complex with maintenance fee - 6 euros per sq.m. per year. 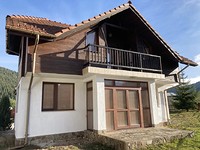 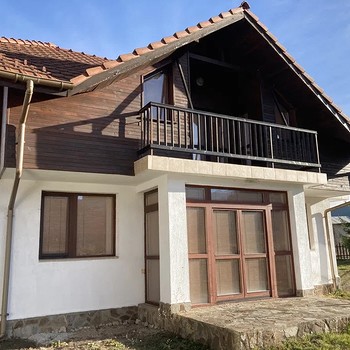 Swiss Launches Sofiazurich Flight 11/03/2008
Swiss International Air Lines (Swiss), Switzerland's flag carrier, will launch daily flights between Sofia and Zurich on March 30. The daily flights were put on the schedule as a result of the increased commercial and leisure traffic between the two countries, the company said in a statement...
Snow News Is Good News 20/03/2008
It has been a great season for British skiers for that most obvious of reasons: both North America and the Alps have had great snow. The industry has also been helped by new destinations, such as Finland, Slovenia and Serbia. And it is not over - in the Rockies and the Alps, the snow base is...
Bulgarian property ::  Недвижимость в Болгарии ::  Proprieta in Bulgaria ::   :: Towns in Bulgaria :: Property renovations :: Services and Fees :: Bulgaria Property FAQ :: Map Search :: About Bulgaria :: Mortgages :: Property insurance :: Testimonials :: Contacts :: Disclaimer :: Mountain properties :: Golf properties :: Lake properties :: Rural properties :: Properties in Beach Resort :: Properties in Ski Resort :: Properties spa Resort :: Apartments in Bulgaria :: Land in Bulgaria :: Houses in Bulgaria :: Bulgaria property investment ::
© Best Bulgarian Properties Ltd. - All rights reserved
Regulated Plot Of Land With Perfect Location