House for sale near Velingrad

This is another suggestion for a house for sale located in the mountains. The house is situated in a very picturesque area just 5 km away from the town of Velingrad. It is surrounded by a beautiful pine forest.

The house is still in the process of construction. It is made out of brick. It is on rough stage of completion right now and there are some finishing works left to be done, including placing the window joineries, the outside plastering and the inner finishing. The house is two stories. Each floor has total living area of 60 sq m. It is built on a plot 650 sq m large. The property also comprises a garage on the ground floor of the house.

Velingrad is one of the oldest, most beautiful and most popular Bulgarian spa resorts. It is situated in the middle of the wonderful natural surrounding of the Western Rhodopes, 86 km southwest of Plovdiv and 133 km from the capital Sofia. The greatest wealth of Velingrad and the region are its water resources.

There are 78 mineral water springs in the area. The greatest Karsts spring on the Balkan Peninsula named Kleptuza is a mere wonder of nature.

House for sale near Velingrad

This is a nice, large house for sale, located in the town of Rakitovo, few km away from the balneological resort of Velingrad and the Lake of Batak. The house comprises two residential floors, each around 70 sq m in size. The total living area of the house is 140 sq m. The first floor consists of one large premise suitable for a tavern, workshop or a basement, and also a sanitary premise. The second floor comprises two bedrooms, dining room with kitchen box, sanitary premise. The house is quite new. It is finished in 2000 year and during the construction have been used high quality materials. The floorings are wooden, and the window joinery is also wooden, faience and terracotta in the sanitary premises. There is a possibility for constructing one more floor. The house is built on a plot of land with size 320 sq m. The property is set just around 12 km from Velingrad. Velingrad is a well-known spa and climatic resort in Bulgaria. It is located in one of the most picturesque parts of the Rhodope Mountains - the Chepino valley. The greatest wealth of Velingrad and the region are its water resources. There are 78 mineral water springs in the area. The climate is temperately continental, mild and pleasant fresh. The summer is cool, the winter mild and snowy and autumn is warmer than spring. 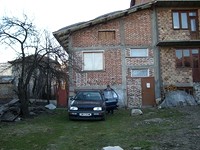 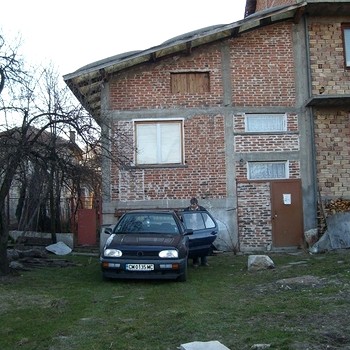 Studio for sale in Velingrad

For sale is an apartment located in a brand-new residential building in the town of Velingrad. The building was finished in 2019. It has five floors in total, no elevator. The offered apartment is on the third. There is electricity, water and sewer. The building has Act 16 permission. There is no maintenance fee. The clean living space of the apartment is 23.80 sq m. The price also includes a basement of 3.70 sq m, 4.60 ideal shares and 13.56 sq m of the land. The apartment is a studio type. It is fully furnished with kitchen appliances and has all the amenities for permanent living or for vacation and rent. It has a terrace with panoramic mountain views. The building has luxurious shared parts, controlled access and a yard with a barbecue. The property is located in the central part Velingrad. 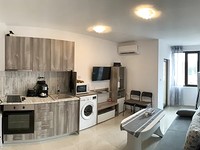 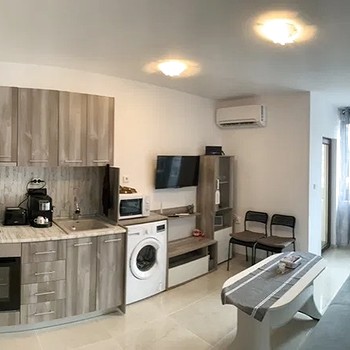