One of the best investment potential Bulgarian areas, which discovery is happening just before our eyes now, Batak Lake and Tsigov Chark resort stood for some years in the shade of the better known ski resorts like Bansko and Pamporovo. A stunningly beautiful region with great summer potential together with the winter ski facilities and the proximity of the fabulous Velingrad spa town nearby, in a year from now the area and the prices will be unrecognizable. More and more new villas and developments are being build in the area. The land that we offer is 3000 sq m large and not regulated. This means that if you want to build on it you need to change its status first. Water and electricity are close to the plot. Water is about 150 m away and electricity is about 300 meters far. The plot is situated on two roads as you can see from the pictures attached, and the closest asphalt road is about 70 meters away. The price per sq m for the plot is 28 euros and the total price is only 84000 Euros. There is a possibility to buy some of the neighbouring plots!!!Tsigov Chark is located in the Western part of the Rhodopi mountainis, some 8 km from the town of Batak and 24 km east from Velingrad. The resort is situated nearby the artificial lake of Batak. The average altitude is 900-1100 meters above sea level. The resort is both suitable for snowsports in the winter and summer holidays (near the lake can be put a caravan or a tent). It is an excellent opportunity for skiing far away from the expensive and luxury resorts. In the vicinity of the resort a number of chalets and hotels are located, amidst the beauty and the crystal clean air of the Rhodope Mountains. The Batak Dam is attractive site for camping fans, because they can spend the night in tents or caravans at marked sites.The new piste Tsigov Chark offers good conditions for skiing and snowboarding. The average drop is around 100 meters, which make is suitable for both beginners and intermediate skiers. The total length of the piste is 1500 meters.It has 2 parts: In the bottom area it is easier, suitable for beginners, there iare 2 drag lifts there. In its upper it is steeper and is served by a tow-bar drag lift. There is a project to make this piste longer in the next years. A well equipped ski rental and ski instruction are available too.Velingrad is the most beautiful and most famous among the Bulgarian Balneological resorts. It lies at the western end of Chepino Valley, one of the most attractive part of the Rhodopean Mountains in Southern Bulgaria. There are 70 sources of mineral water with curative and preventive properties.Take advantage and don`t miss this chance for a profitable investment!

Apartment for sale in Velingrad

We sale a perfect, one-bedroom apartment located in the spa capital of the Balkans – Velingrad. The apartment is on the first floor of a five-storey building with one entrance and elevator. On the ground floor of the building there is a fitness and a spa center. The building is new construction (2009). The total area living area is ​​93.7 sq m and the clean space is 83.7 sq m. The apartment consists of a living room-dining room, one bedroom, bathroom, toilet and a balcony (glazed). The walls in the rooms and corridor are latex-painted. The floors are finished with laminate. The bathroom has terracotta. The apartment is located in a 10-minute walk from the center of the town, in a quiet place, near a park, playground, medical center, swimming pools, shops and spas. The apartment is in excellent condition. The property benefits with security system, cable TV, Internet. There are no fees for service and maintenance. 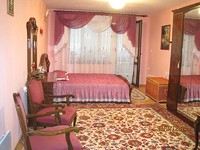 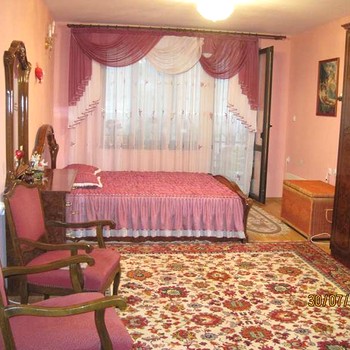 Luxury apartment for sale in the town of Velingrad

We bring to your attention this modern, luxury furnished apartment located in the spa capital of the Balkans - Velingrad. The apartment is on the ground floor in a new, four-story building. The building is set next to a forest and to the famous hotel Maxi-Velingrad. The offered property has an area of ​​82 sq m. The price also includes a garage of 25 sq m. The apartment was converted from a two-bedroom to one-bedroom, but can be rearranged if required. Currently it consists of a huge living room with dining area, modern kitchen with high class appliances and a stone countertop, huge bedroom furnished in style, a bathroom with a toilet and an entrance hall with built-in wardrobe. Since being on the ground floor, the apartment has its own large yard with a shed and a barbecue. The heating is local – on pallet boiler which is installed in the garage. 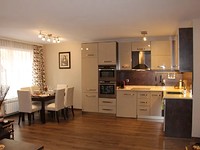 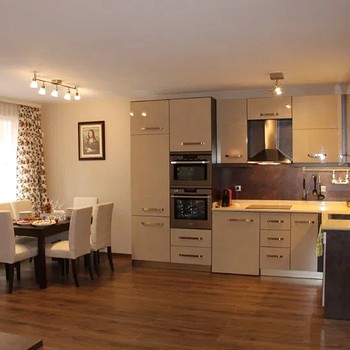 Apartment for sale in Velingrad

We are glad to present to you this perfect, one-apartment apartment for sale, located in the spa capital of the Balkans – Velingrad.   The property is part from a five-storey building with one entrance and an elevator. On the ground floor of the building there is a fitness and spa center. The building is new construction, four years old.   The apartment is on the first residential floor above the ground floor. The total living area is ​​93.7 square meters, and the clean living space is 83.7 square meters. The apartment consists of a corridor, living room, bedroom, bathroom, toilet and a balcony (glazed). The walls in the rooms and corridor are painted and the floors are laminate. The bathroom is finished with terracotta and it is fully equipped with shower.   The apartment is located in a 10 minutes walk from the center, in a quiet place among pine trees, near a park, playground, medical center, swimming pools, shops and spas. The apartment has cable TV, Internet and telephone. It is in excellent condition.   The monthly maintenance fee is 8 levs per apartment (elevator, electricity, cleaning lady). 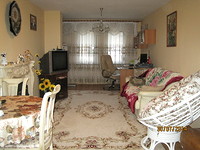 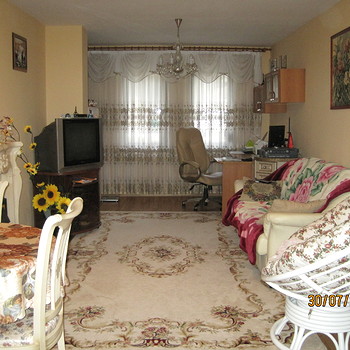 Bulgaria Ranks After Spain And France In Real Estate Popularity 07/03/2008
Despite the lower property prices, Bulgaria ranks after France and Spain based on the popularity of the country as property destination for British investors. Nearly 43 per cent of the foreign property purchases occurred in the two countries, 999 Today reported. Australia ranks third with 11 per...
Eastern Europe To Benefit From Weak Pound 14/04/2008
The tourist trade in eastern Europe could be set to benefit from the weakening pound, an expert has suggested. According to Helen Warburton of the Post Office, many consumers in the UK are looking outside of the eurozone because the currency is now much stronger than the sterling. In fact,...
Bulgarian property ::  Недвижимость в Болгарии ::  Proprieta in Bulgaria ::   :: Towns in Bulgaria :: Property renovations :: Services and Fees :: Bulgaria Property FAQ :: Map Search :: About Bulgaria :: Mortgages :: Property insurance :: Testimonials :: Contacts :: Disclaimer :: Mountain properties :: Golf properties :: Lake properties :: Rural properties :: Properties in Beach Resort :: Properties in Ski Resort :: Properties spa Resort :: Apartments in Bulgaria :: Land in Bulgaria :: Houses in Bulgaria :: Bulgaria property investment ::
© Best Bulgarian Properties Ltd. - All rights reserved
Big plot in Tzigov Chark